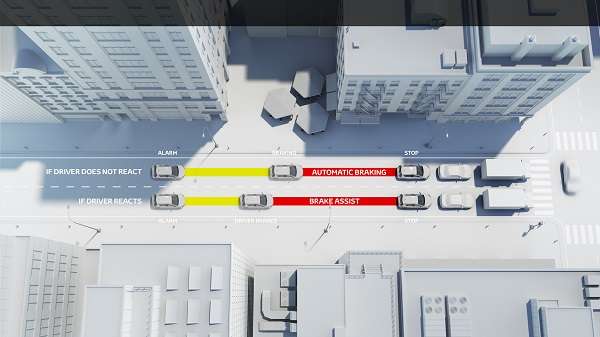 Toyota and Lexus dramatically reduce the cost of important safety systems and begin the roll out.
Advertisement

Toyota and Lexus launched their new, much-lower cost active safety systems this week on two new models. The Toyota RAV4 Hybrid will be one of the first new models with the Toyota Safety Sense (TSS) package. Lexus new 2016 RX 350 will be the first Lexus to employ the new Lexus Safety System (LSS).

Safety At Lower Cost
The main idea of the new systems is to offer forward collision prevention, lane departure warnings, and automatic high beams on more cars. Toyota is pricing its new systems dramatically lower than existing systems now on the market. Toyota has two systems. The first has a price point of about $300, the second, about $500. Based on our testing and taking note of the added cost of such systems on Monroney stickers, these prices seem to be about half or 1/3 what most automakers charge.

Commenting on the systems, Bob Carter, Senior Vice President – Automotive Operations at Toyota Motor Sales, U.S.A. Inc. said, “Studies indicate that advanced active safety technologies can have a profound effect on automotive safety. Toyota is proud to expand the availability of these technologies – and to do so at an excellent value proposition for our customers as well.”

Toyota Safety Sense Packages
Toyota’s packages are called TSSc and TSSp. C is for compact. This is the $300 system. It includes a pre-collision system (PCS), lane departure alert (LDA), and auto high beam (AHB). Note that dynamic cruise control is not part of this package expected to cost buyers about $300.

TSSP adds pedestrian pre-collision and dynamic radar cruise control. This type of cruise control allows you to set a speed, but to slow down if a car in front of you slows and then speed back up to the pre-set if the car moves over or speeds back up. In practice, it works very well. The pedestrian pre-collision system acts to stop the vehicle if the driver does not and a pedestrian might be hit. Most of these systems can act faster than an attentive driver, and, therefore, add to the safety of pedestrians.

The Lexus Safety System+ is very similar to the TSSp package. These systems will increase the popularity of active safety systems and help Toyota to improve its overall fleet safety. Presently, Toyota is at the top of the industry concerning safety, as we explained in a prior story.

danwat1234 wrote on September 9, 2015 - 1:25pm Permalink
So, it uses a camera in front of the rear view mirror like Subaru does and radar in the bumpers? How does it cost less to manufacture than the safety systems in say the 3rd gen Prius and other Lexus/Toyota cars? I wish the video went into how it is more affordable and how it exactly works. On the side, to detect lane departure, it is a combination of the camera in the rear view mirror and radar in the side on the car or a camera in the side mirror?

LG's New EV Battery Plant Is a Welcome News for Tesla
Tesla Giga Berlin's New Hurdle: It's Not Only the Gov't, but Now Tesla Itself
END_OF_DOCUMENT_TOKEN_TO_BE_REPLACED