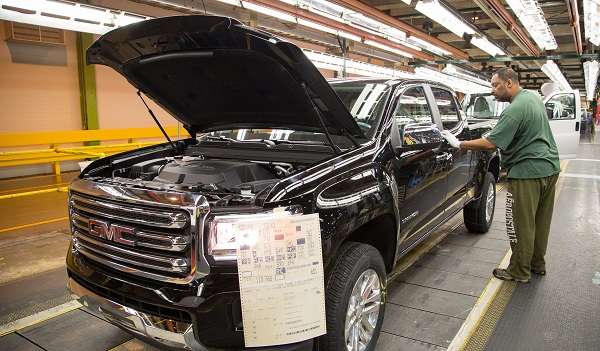 Both automakers are selling all the mid-size trucks they can make. Here is how they will make more.
Advertisement

The 2016 Toyota Tacoma, and GM’s twin trucks the Chevy Colorado and GMC Canyon, are among the hottest-selling vehicles in America. Both are sell-outs in normal production and sales months. These hot-selling models are not being moved by big discounts or incentives either. GM is not shy about stating that, “Throughout 2015 and continuing into January, the GMC Sierra, Canyon, Yukon and Yukon XL have had the highest average transaction prices in their respective segments, according to J.D. Power PIN estimates.” Translated, that means that trucks like the Canyon are selling at high prices and high profits. The only problem for these two manufacturers is, well manufacturing.

Last year, Toyota bet on itself in advance of its 2016 all-new Tacoma. Although Toyota knew GM had winning models in the Canyon and Colorado, Toyota increased its truck plants in Texas and other North American locations to three full shifts. That upped its production capability of mid-size trucks to about 17,000 units per month while still leaving room for about 10,000 larger Tundras made on the same lines. That done, what could Toyota do now to make more? According to a Toyota Public Relations contact, we communicated with today, Toyota is adding a Saturday shift at its Baja and San Antonio locations. Toyota says about its mid-size truck that its “annual capacity is 210,000 units. However, production has surpassed 230,000 units the past two years due to strong customer demand for our trucks (through OT and select Saturday production).” Adding in more Saturdays on a regular basis will boost that a bit further.

GM’s Wentzville, Mo. plant is also at three shifts making the Canyons and Colorados at about a 10,000 unit per month pace. GM is reportedly looking for more truck capacity but has not yet found a new location to make these cash cows. We reached out to GM spokesperson, Monte Duran, and asked about production increases. He told us directly,“ As with most of our plants, we had a planned shutdown of the holiday break. While the line was stopped, we took a few extra days to make changes necessary to help speed up the line rate, and ultimately annual production volume for Colorado to help keep up with demand.“

With both Toyota and GM adding workers, overtime pay, and a greater volume of popular high-profit vehicles it is clear that the companies and their workers are both winning. Once the greater number of trucks become available customers will also be winners as prices stabilize and lead times shorten.

Justin Bosley wrote on February 22, 2016 - 12:45pm Permalink
Great to see the mid-size truck market picking back up. I am Tacoma owner and love my truck. Hopefully this segment continues to get stronger. Half tons are getting a big outrageous these days. I personally think trucks in the Tacoma and Colorado size are all most people need (to each their own though)! Hopefully both these products stay strong. Gotta love options! Makes it easier to negotiate!
John wrote on March 12, 2016 - 9:56am Permalink
I paid less for a Tundra than the Tacoma. The Tacoma with the Crew Cab/6 feet bed combination isn't much easier to park in the city. The Tacoma feels tight if you are 6 ft tall or more. My head touched the ceiling with no way to lower thr seat. In real world conditions the Tacoma only gets 2 mpgs better than the Tundra. I can't figure why anyone would buy a midsize truck.