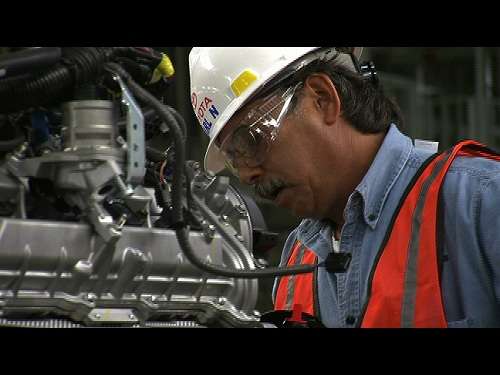 Coming shortly on the heels of its announcement last week that it would expand its operations in Michigan, Toyota announced today that it will add about 80 jobs in its Georgetown, KY plant. The expansion will cost Toyota over $30 million and will increase the total output of engines at the plant by 100,000 units per year. In total the plant can now produce over 500,000 per year and in the US Toyota can produce 1.2 million engines. This expansion will raise the total employment at the plant to 6,700 people. The twenty six year old plant represents an investment by Toyota of nearly $6 Billion dollars.

Toyota’s 2.5 liter, four-cylinder engine is relatively new. Its 178 horsepower and good torque rating can fuel efficiently power mid-size cars and crossovers that are not meant to be sports cars.

Political Support
Commenting in a press release, Wil James, president of TMMK. Said “This is great news for our team members and our company. This project is the result of the strong partnerships we have locally and across the state, which will help grow our business and strengthen the communities where we do business.” A host of politicians of both parties praised Toyota’s increased commitment to the state,. Included in those commenting were Sen. Mitch McConnell, and Paul Rand, and Congressmen Ben Chandler and Geoff Davis.

In total, just since February, Toyota has announced investments in North America of over a half-billion dollars and 1,000 new jobs. Many of the jobs are in manufacturing, but Toyota also recently added a new design center in Michigan which will employ about 250 highly skilled engineers and scientists when it is complete. The company also opened a dedicated office in Silicon Valley to focus on infotainment systems.

Toyota is increasing production, design, and engineering staff and capacity in the US to meet high demand for its vehicles.