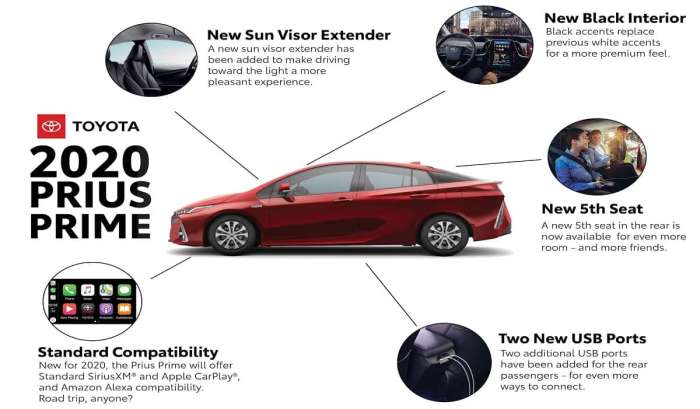 We follow a lot of forums that discuss EVS and the lack of a fifth seat is often cited by those who opted for a Chevy Volt in the past or a Honda Clarity in the present. Whether the seat's usefulness was real or imagined, for those buyers it mattered. Adding the seat makes good sense. It will, of course, be a middle seat in a small car, but it's there now, just like it is in most of its competitors.

Toyota has also added two new USB ports for the rear passengers. Connectivity is critical for vehicles like the Prius Prime. This is a very practical and likely low-cost way for Toyota to add a useful feature.

On the topic of connectivity, Toyota adds Apple Car Play connectivity as well as Alexa for 2020. While we are happy to see Toyota edging into the modern era of infotainment, with no Android Auto compatibility, this is one area in which Toyota continues to lag every single competitor except Tesla.

Toyota has also made interior design changes. Black on black colors are now available instead of black with white trim. Toyota has also improved the sun visor and heat controls.

Toyota is also shifting the Prius Prime to its conventional trim names of LE, XLE and Limited Grades. These will help confused shoppers (and confused auto writers) to better understand what the trim levels represent. The Prius hybrid also has converted back to these and we think it is very sensible.

Toyota's Prius family changes in very meaningful ways this year. The big news for the hybrid was the addition of all-wheel drive. Along with the fifth passenger seat in the Prime, we think these are very wise improvements to a family of vehicles that continue to dominate in the green vehicle marketplace.

Image Note: The elongated appearance of the Prime in the infographic above is not due to Torque News editing. The original provided by Toyota looks that way.

Robert Pollock wrote on May 3, 2019 - 4:00pm Permalink
One day they'll separate plug-in hybrids from real electric cars. The statistics are crazy when they mix the two. One technology is the future and will help us with Global Warming, the other is a contraption invented by the legacy auto-makers to make up for their missing the boat on electric cars. Every one purchases displaces the purchase of a real EV, and sustains the Petro infrastructure. Toyota Prius, is not a 'green' car. Nor is a Volt, or any of them.
John Goreham wrote on May 3, 2019 - 8:20pm Permalink
Your opinions on green cars are as valid as anyone else's. Here is fact: Affordable battery electric cars are declining in sales in America and plug-in hybrid sales are continuing to outpace them. Not a single affordable BEV broke 1,000 unit sales last month. Without including the PHEVs and EREVs there really is nothing to discuss.