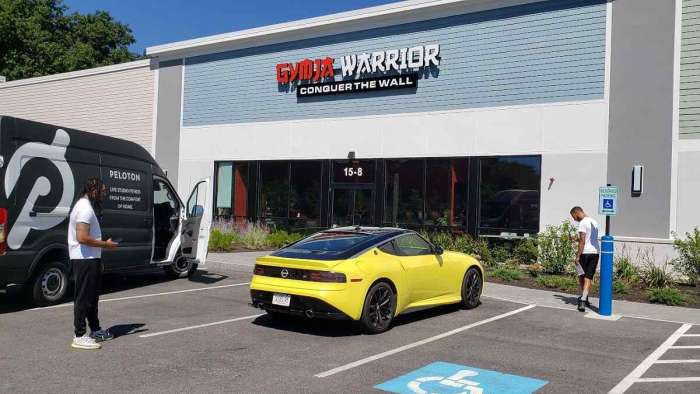 Fans of the classic and recent Nissan Z cars LOVE the new generation. Here's what we observed during our time in the new 2023 Nissan Z.
Advertisement

During some time with the new 2023 Nissan Z sports coupe, it became abundantly clear that those fans of the car who saw it were crazy about the new design. On many occasions, we were approached by wide-eyed fans of the Z cars who wanted to ask questions and check out the car. Not since we had the original Ford Raptor and Alfa Romeo 4C spider have we seen such a strong reaction from the public.

Being a member of the automotive press is a privilege that comes with some unwritten rules. One of those rules is that when you are testing a cool car, you make time to answer questions by the public when you are out and about. In my case, I invite people to sit in the car, answer all the questions they have, and when available, I offer Monroney window sticker copies.

During my time with the Nissan Z, I drove it to the Massachusetts headquarters of Haartz Corporation, makers of the finest top materials in the world for convertibles. My reason for the visit was to interview the CEO on the company’s 100th anniversary. The interview went well, and I left the parking lot in the Z. Shortly after, my friend at the company who had helped me to arrange the interview called me on my cell. “John, were you the one in the new Z today?!” I replied, “Yes, that was me. I’m in it now.” He asked if I could come back to the factory. One of the employees (Phil) was a huge fan and missed seeing the car when I was there, having been trapped in a meeting he himself had called. “Of course, I can return,” I said and headed back.

It turns out Phil was no ordinary fan. He and his dad had been racing vintage Zs in SCCA and other events for many years. In fact, Phil’s son is now the third of their generation to catch the Z racing bug. Phil showed me some great cell phone images of all the Z cars the family has now and had in the past. Phil and I spent quite a bit of time in the new Z. He took stills and videos, and we took a long ride together in the car. It became clear to me that folks like Phil, who are Z superfans think this new one is perfect. His one concern was that the rev-matching downshifts could not be shut off. I showed him both the easy-to-access off button and my own attempts to rev-match some shifts. The car is better at it, for the record.

You would think this interaction could not be outdone, but it nearly was. While out and about, two gents stopped me and asked if they could check out the Z. They were working for a gym equipment company and spotted me as I parked. Again, I invited them to sit in the car and we popped the hood and hatch. More videos and stills were taken. These guys were in their late 20s, so I didn’t expect that each would have a Z image to show me. One of them had owned three so far, and his dad was a “Supra guy.” He asked me many detailed questions about which I preferred (I’m a former Supra owner and have tested the new generation twice).

At a gas station, I was talked up by a man filling up a Mercedes who had owned many past Zs. At the supermarket, a middle-aged mom came over to see the car and said she really wanted one for her collection. My neighbors all stopped by.

Cars like the legendary Nissan Z are tricky to update. Fans remember the old cars so fondly that any updates can be viewed as suspect. Not with the Z. It was clear to me from many interactions that the casual and hard-core Z fans alike think Nissan has hit a home run with the all-new 2023 Z.