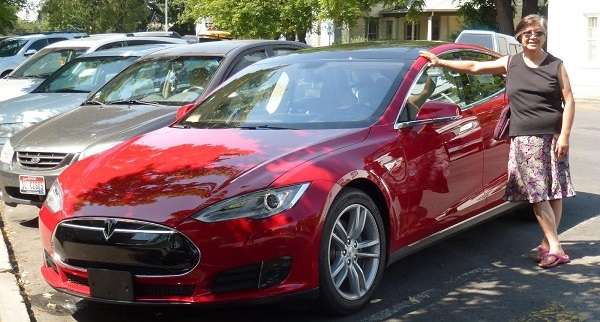 A surprising look at who buys the Tesla Model S

If you think you know what type of person buys the Tesla Model S electric super-sedan you may be surprised by this interview with an actual owner. Maybe the experts are wrong.
Advertisement

We recently ran a series of stories about Tesla Motors and its coming Gen III mass-market vehicle. In one of the stories, we used the term “very wealthy men” to describe Tesla Model S owners. This was partly because Elon Musk, founder of Tesla, had recently used a similar term. While referring to the Model S, he said: “…this could be misinterpreted as Tesla believing that there was a shortage of sports cars for rich people.” Also, Edmunds had recently done an analysis of the Tesla ownership and found that more than 80% were men, and nearly 80% earned over $100K per year.

A reader contacted us to challenge our perpetuation of the stereotype in that prior story. That led to a dialogue between us that we found very exciting and educational. Here is our interview with a Tesla Model S owner, Ms. Charlotte O.

Hello Charlotte. Please tell us a bit about yourself.

In regards to information about me, I earn less than $100k per year. I am a Professor of Biology at Washington State University, Pullman, WA soon to retire. I am over 60 and Japanese American. I know of a couple of other professors, i.e. not uber rich guys, who own a Model S, too. I heard of
similar buyers of Model S who previously owned a Prius or Nissan Leaf. So I don’t think I’m unique in not being rich though maybe not fit the profile of the average Model S owner.

You brought up the other most popular green cars available. Did you have other green cars in the past? Why not a more affordable Volt or Leaf instead of a Tesla?

I guess you can call me an environmentalist. I bought my second Prius in 2009, and last year was considering getting an electric car. Unfortunately, at that time, there were only 3 cars that I could purchase in the state of WA, Nissan Leaf, Chevy Volt and the Tesla. There are more choices if you lived in CA but that makes me think that companies that limit sales of green cars to CA are doing it just for the ZEV credit, not with the intention of selling lots of green cars. The problem with the Leaf and Volt is their range. I live in a small town in Eastern WA about 90 miles south of Spokane WA, the largest city in our area. I could not even get to Spokane without charging the Nissan Leaf, and Chevy Volt would have had to kick in its gas engine. Since my whole point was to get off of gas, and the fact that having both electric and gas would make the whole thing more complex, I decided against the two. The only negative about the Tesla was the price. But then I actually saw one in Seattle and got to test drive it. That sealed the deal. It is so cool looking.

Have you ever owned a performance car or a sporty car before this?

Decades ago, I purchased a used Mazda Miata. Yes, a red one and it drove great in the summer with the top down, but in our area, I could only drive it for 3-4 months out of the year. When I got my Prius, I just couldn’t justify the fun car because it got worse gas mileage. The Model S handles like no other car I’ve ever driven. I’ve never driven a sports car or luxury car so for those who have, it may not seem all that great. I don’t know.

We have driven it. Yes, it is all that great. Other automakers have responded to Tesla. For example, Porsche has come out with a plug-in Panamera Hybrid. Were cars like that on your radar when you shopped the Tesla Model S?

No. I didn’t know that Porsche made electric cars. Is it all electric and available in WA? It is interesting that you ask though because a colleague who is into fancy fast cars rode in my Model S and compared it to Porsche Panamera.

Buying a car as expensive as the Tesla Model S must be a little scary. Did you have any worries about such a big decision?

Before I committed to buying I did have some questions. I wondered if the insurance would be more with it, but my insurance agent said that it would not be more than for a car of similar price. I also worried about winter driving since if I paid that much for a car, it had to be a year-round car. I e-mailed Tesla, and they promptly e-mailed me back with a YouTube video of a Model S doing slalom course in Minnesota in the depth of winter. The Tesla guy did suggest that I opt for getting the active air
suspension option to go over large snow berms, which I did. Having now driven through two snow falls, I can say from experience that it handles great and it stops without any fishtailing or hesitation on icy roads. We will be having VERY cold weather soon high of 17! so we’ll see how the Model S handles that.

That active air suspension you mentioned on your Model S should have been changed recently. In response to the fire hysteria, Tesla modified your car so it will not lower automatically on the highway. What did you think of that?

The fact that they can do over the air software update is great. I heard that one of the most common accidents that Model S had been in are rear-end collisions. I suspect that that was due to the aggressive regenerative braking, and I bet that initially, the brake lights did not go on when one released the accelerator. But I know that in my Model S (because I keep the rear view camera on while driving) when I release the accelerator, the brake lights do come on. I think Tesla monitors any
problems or accidents to their cars, and if something can be fixed with a software update, they do.

What was your biggest surprise about the Tesla Model S?

The power is amazing, I love to be the first car at a red light and zoom off half a block down before other cars get out into the intersection. I also go fast, but since it’s so smooth and quiet, it’s the acceleration that I get a kick out of even from 0-30. I also have not gotten a speeding ticket, and there’s no law against fast acceleration! Of course, now that it’s snowy, I’m more careful, not because of my car, but I’d hate to T-bone someone who can’t stop at a red light.

Another feature that is new to me is the Tesla app on my iPhone. I think some other luxury vehicles have a similar thing, but it is new to me. I can see how much charge it’s got, for example, if I’m charging at a public station while I eat lunch. My favorite feature, now, though is the ability to turn the climate control on and have the car toasty before I get in. I’m sure it would also be great in the summer to be able to vent the sunroof or turn on the AC. I played around with the remote horn and lights, especially when there’s a group of people looking at it.

You brought up driving the Model S in snow. Have you done anything like getting special winter tires?

Yes, I contacted Tesla and they told me to get a Pirelli 240 Sottozero. I went to my Ford dealer to request it, but they had a lot of trouble getting it, so I got what they said was comparable with very similar looking treads. I also got chains just in case.

Have you ever used the Tesla Supercharger network?

No, I wish there was one close by so that I can use it. I expect to have one within range before next spring. Ever since I ordered my Model S, I think they’ve put in 1 or 2 superchargers per week. At least they did not have any in Washington State or Oregon and I think less than 20 but now they have 37 including in South Dakota! I’m looking forward to getting a Supercharger in the middle of the state so that I can get to Seattle and then up and down the coast. I keep an eye on their Supercharger network(which I can see on my places tab on the map in the car) and also the map on Tesla site. I did take delivery of my Model S in Bellevue WA, and charged up for a couple of hours at the Roadster charger in Ellensburg, but I’m afraid to do the trip in reverse, especially in the winter time. Of course, if I have to go to Seattle, I can arrange it to go to a hotel or RV site but since I don’t, I will eagerly await the installation of Superchargers.

Early in this interview you call yourself an environmentalist? What other things have you done to live more of a green lifestyle besides buying the Tesla Model S?

We do try to live a green lifestyle. Several years ago, we had an energy audit done, and were amazed that there were very inexpensive things that we could do to save energy, particularly loss of heat from the house. The month after we did these things, we saw an immediate drop in our energy use. We do not have air conditioning, and when it gets hot in the summer we open all the windows and doors at night. It cools off at night here. One of the first things we did was get a dual flush toilet a while ago before such things became more commonplace. We have rain barrels that we use to water our house plants. Now that I got a Tesla, I plan to install solar panels on an awning above our deck this spring.

We connected when you slapped my hand for perpetuating the stereotype in a recent story that all Tesla owners are “Rich men” as I put it. Do you want to comment on that?

Finally, just to let you know, I love to challenge stereotypes. My second Prius was sheathed in camouflage. I keep Jimmie Johnson hat in my Model S; the red trim matches my Tesla, and I heard that compared to the average American, Tesla owners are less likely to be NASCAR fans.

Our sincerest thanks to Charlotte. At Torque News our readers are our first priority. Nothing makes us happier than a comment back to us under a story. That a Torque News reader would be so generous with their time and personal information is very humbling. If you enjoyed this interview, please post your thanks to Charlotte in the comments section below.

Note: The Q&A section above is presented in an interview format, but the content was taken from unedited e-mails. Charlotte’s words were not changed in any way and she approved this story prior to publication. The photo is hers and used with her permission.