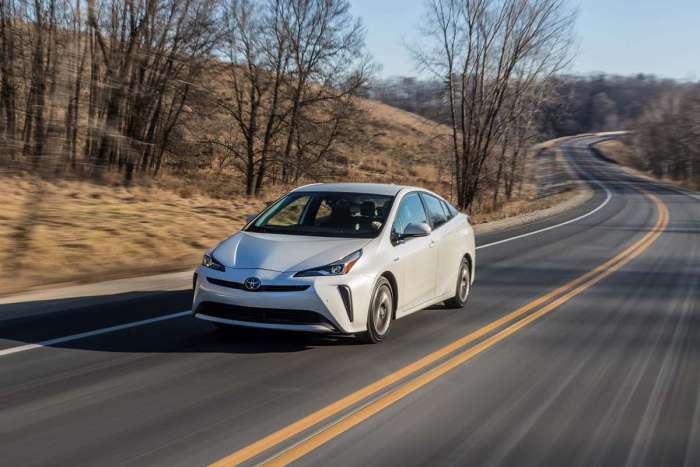 Still No Toyota Prius Killer Despite Many False Headlines

Despite many publications' and many writers' claims, no affordable green car has "killed" the Prius.
Advertisement

Ever since the Toyota Prius emerged as the world's most popular and most successful green vehicle, publications and author' with an agenda have been creating stories about the next "Prius Killer." The general idea is that a company (other than Toyota) has a new vehicle in the works that corrects the "mistakes" that Toyota has made with the Prius and will thus outsell it. Another theme is that a new vehicle of a different type, such as an electric vehicle of some design will be the "replacement" for the Prius. Every single article ever written along these lines has been proven false. Let's break it down.

Hyundai Ioniq "Prius Killer "
Hyundai's Ioniq is one of our favorite green cars. The Ioniq is surprisingly large inside, and like all Hyundai products, has a great infotainment system. Hyundai opted to use a dual synchronous clutch transmission in its Ioniq Hybrid and the car arguably drives a bit better than the Prius. The Hyundai Ioniq also has a longer (arguably better) warranty. Clearly, this will be the car that dethrones the Prius. Nope. Hyundai sold 7,599 Ioniq family cars through the end of June. Toyota sold 29,241 Prius family cars in that same half-year period. Toyota's Prius outsells the Ioniq by about 4 to 1.

A couple of publications that predicted the Ioniq would be a "Prius Killer" include the Verge, and 95Octane.

Kia Niro "Prius Killer"
The Kia Niro is the same car as the Hyundai Ioniq. They share pretty much all of their drivetrain components and are made by companies under the same ownership. We love the Kia Niro. In fact, the Niro BEV is this writer's favorite car overall right now. However, Kia sold just 11,942 Niro family cars in the first half of 2019, about a third of the Prius's family sales. CarBuzz named the Niro a Prius Killer.

Honda Insight "Prius Killer"
Next up is a name that Honda has brought back from the dead. The new Honda Insight was named by HotCars a "Prius Killer." So how is the Insight doing? 12,548 units sold in 2019 is nothing to sneeze at. With a run rate of about 2,000 units per month, the Insight is indeed doing better than the Ioniq and Niro.

Ford C-Max - "Prius Killer"
The Ford C-Max was a copy of the Prius in many ways. We hardly ever see any in the wild, yet the New York Daily News called the C-Max a "Prius Killer." So how many C-Max cars did Ford sell in the first half of 2019? Thirty-eight.

Chevy Bolt & Nissan Leaf "Prius Killers"
When the Chevy Bolt first came out it seemed like a winner. The Bolt had the range that the Nissan Leaf lacked, a fun nature, and hit a home run on safety. The Drive called the Bolt a "Prius Killer." Heck, everybody called the Nissan Leaf a Prius Killer, including Slate. Now representing almost the totality of the affordable battery-electric vehicle market these two combined have a total sales of 14,289 units in 2019. So less than half of the Prius family's sales.

There are green cars that have higher sales than the Prius. The RAV4 Hybrid is now edging past the Prius and Tesla's premium/performance Model 3 is selling at a higher rate. However, none of these cars has "killed" the Prius. It just quietly goes about its business every month, the top-selling affordable green car in the world and in the U.S. market. Maybe the "Prius killer" headlines should be laid to rest?

TT wrote on July 5, 2019 - 10:48pm Permalink
What exactly do you consider Prius going about its business? Prius was selling like gangbusters in the early 2010's but sales have been plummeting. Sales for the first six months this year are down 77% from same six months in 2012. Sales this year alone are down 37% from Q1/Q2 2018. Can you think of a new EV model that may have caused the Prius sales to drop off the cliff?
John Goreham wrote on July 6, 2019 - 1:06pm Permalink
"Going about its business as the top-selling affordable green car nameplate in America." You make a great point about which model may be a cause. That added story at the top called " A Quick History of Prius Sales And Why Tesla's Model 3 Has Had Little Impact On Prius" offers a good answer to the question. The peak for U.S. Prius sales was actually 2007. The Prius dropped by about 30% before any EVs were even available in any real numbers. The Prius has been dropping for over a decade steadily. It remains the top-selling affordable green car sold, but its monthly slaes have been replaced by the RAV4 Hybrid, Camry Hybrid, Highlander Hybrid, and most recently the Corolla Hybrid. Also, the Ioniq, Niro, and other hybrids have also pulled away some sales. Without a doubt, EVs have also been a factor. However, no single vehicle can be pointed to as the "Reason for lower Prius sales." Particularly the Model 3. The Prius had declined in sales by more than 2/3s before the Model 3 was even shipped. It's really no surprise that the Prius is lower now than when it was the only green car choice. The real story here is that overall green vehicle sales have barely expanded in America. They've just shifted to a wider spread of vehicles.
Emile Evans wrote on July 9, 2019 - 7:55am Permalink
I own a 2008 Prius and a 2014 leaf The Nickle metal hydride battery in a Prius will last at least 15 years and only costs £1,200 to replace in the UK The lithium ion battery in a leaf degrades 3% to 4% a year in the UK (more in hot climates) and. Cost £5,000 to replace. A lithium ion battery car will not last 15 years