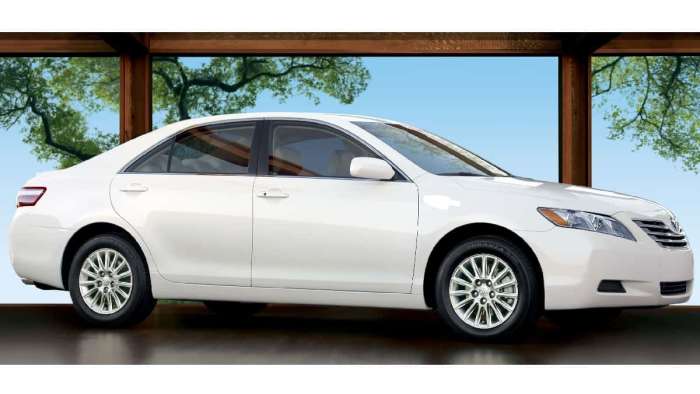 The Toyota Camry is a perfect used car to consider. However, some years and colors are much more likely to come with problems you can avoid.
Advertisement

Buying a used Toyota Camry is one of the safest used car decisions you can make. The Camry sedan model and the Toyota brand have an outstanding reputation for quality, durability, and reliability.

The first consideration when buying a used vehicle is to avoid someone else's problems. You don't want to buy a car with a defect or looming failure that will cost you money on repairs. The Camry is a great car to avoid that, but not every used Camry is the same. There are three model years to avoid and two colors you should simply not buy.

Related Story: Which Is The Most Reliable Used Car Purchase: Toyota Camry, Honda Accord, Nissan Altima, or Hyundai Sonata

Used Toyota Camry Model Years To Avoid
There are three years of the used Toyota Camry you should simply not purchase. They are the 2007, 2008, and 2009 model year Camry cars. These cars have a known engine defect and you don't want to own one. The engine defect manifests itself as burning oil. Although some mechanics, and pretty much every automaker, will say that burning some oil is acceptable, this problem goes well beyond that and can lead to engine failure. 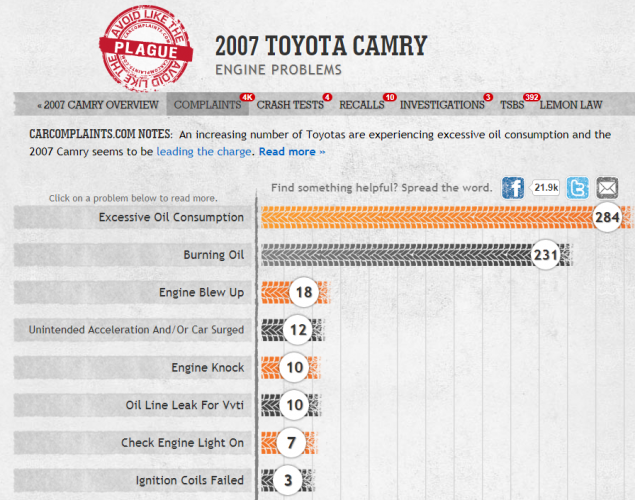 CarComplaints highlights this Toyota engine defect in its Camry section. CarComplaints goes so far as to stamp these years with its 'Beware of the Clunker" and "Avoid Like the Plague" stamps of disapproval.

One owner described the problem many have by saying, "Oil consumption all the time. I fill it and then it would run low again and again and again. over and over and over then one night the low oil light came on AGAIN. This time I couldn't make it home in time and the engine must have thrown a piston or something because it seized right up and now I have a paperweight sitting in my driveway. I don't know what to do. apparently Toyota is not helping anyone out. first and last time I buy one of their vehicles."

Two Used Camry Colors To Avoid
Toyota has been having trouble with two of its white colors. The two Toyota problem colors are Blizzard Pearl (paint code 070) or Super White (paint code 040). Owners of these cars have reported that the white paint comes off in large sections leaving behind bare spots. The paint is also sharp along the edges where it sloughs off, making washing the vehicle tricky and possibly dangerous if you do it by hand.

White is a very popular color, particularly in hot climates like Florida and the rest of the American South. However, these colors of used Camry cars should be avoided. Toyota has a campaign underway to assist the owners of these defective Camrys, but why buy into that hassle? Silver or tan may work just as well.

In conclusion, let us reiterate that the Toyota Camry is a great used car purchase. Just be sure to avoid the three bad years and two bad colors. If you have a used Carmy story you would like to share, please post it in the comments below. Your experience may help a fellow shopper avoid a problem car.