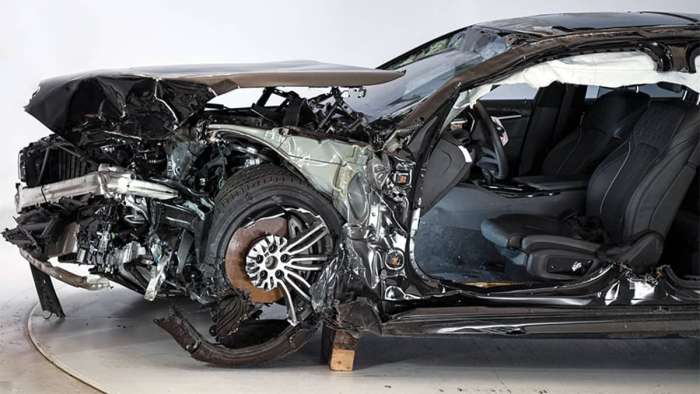 The former head of the Insurance Institute For Highway Safety was involved in a horrific crash. Here’s why he lived.
Advertisement

The Insurance Institute For Highway Safety (IIHS) is the vehicle safety group many automotive experts agree conducts the most rigorous testing in the U.S. For decades, Adrian Lund led the group. During his tenure, the group established new safety evaluation programs and made existing tests more rigorous. He may have saved his own life in doing so.

Mr. Lund was recently involved in a head-on crash worse than any test any agency conducts on new vehicles. Mr. Lund was merging onto a highway and traveling at speeds around 65 MPH when his vehicle was struck by another going the wrong way traveling at an estimated 50 MPH. At that combined closing speed the outcome is often fatal for all involved. “This was a high-speed crash, one that probably 10 years ago, I wouldn't be here to talk to you about it,” Mr. Lund said after the crash.

The vehicle which Mr. Lund was traveling was an IIHS Top Safety Pick and was not a small vehicle, but a large sedan. Statistically, there is no safer type of vehicle. This vehicle earned the best possible scores on two tests that IIHS specifically developed; The small frontal overlap test and the roof strength test.

Lund recalls hanging upside down after the crash and noticing that he had room to move his legs. His expertise in vehicle safety meant that he knew he had just been in a frontal offset collision, one of the most dangerous of all types of crashes. The crash was very similar to the many tests he had watched in the crash hall at the IIHS Vehicle Research Center. He knew that in those tests, the structural intrusion is often worst around the legs, and the crash test dummy frequently registers high leg injury measures. Lund recalls the first responders arriving. “They kept asking me, ‘Are you OK?’ I said, ‘I think I'm OK. I don't feel anything broken.’” Mr. Lund had a minor head injury that resolved without treatment.

Hanging upside down in his seat, Lund was unharmed even though his vehicle rolled over. IIHS had developed a roof strength test that mandated a vehicle have the ability to support many times its own weight.

The accident also provided a reminder that all the safety equipment in the world won’t help you if you are unbelted, as was the wrong-way driver that crashed into Mr. Lund. The driver did not make it.

Facts of this story are attributed entirely to IIHS. Image of Mr. Lund's BMW courtesy of IIHS.