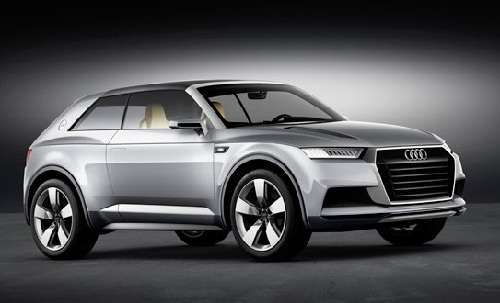 Is this the next Audi Q5

In a debut at the Paris Auto Show Audi has shown the world its design evolution of the Audi Q5/Q3. The new prototype is a full design study highlighting both the styling trend to come, plus a technology showcase of the way forward for Audi in terms of materials, drivetrains, and manufacturing.

Evoking the Evoque
The new Audi Crosslane is a small sport utility vehicle and is shown in a 2-door coupe style. Presently there is a wonderful new 2-door coupe crossover on the market and its name is the Range Rover Evoke. Interestingly, the new Audi has many similar design cues (Qs) and that is not at all bad. Just unoriginal. The upright A pillars, the roof supports running from the hood to the front of the roof above the front passengers, are distinctly similar to the Evoque. The lowered and swept back roofline is also similar in many ways to the Ford Flex/Ford Explorer/Range Rover Evoque. In the Range Rover a similar style to the Fords has to be forgiven considering that Ford owned Range Rover for a good part of the early design time of the Evoque. However, in the New Audi it seems derivative.

2-Doors Are Mainly Show Cars
Don’t expect the 2-door style to make it to production, at least not in any meaningful number. 2-doors look great until you go shopping for one and the kids have to climb over the seats to get in. That’s when the spouse reminds you that Grandma isn’t that flexible and you then walk over to more seriously consider the 4-door. However, the look is fantastic and hopefully a few special edition models will be shipped with the full Audi “S” treatment.

A Materials Mish Mash
Instead of building the whole prototype from carbon fiber, Audi chose to use a blend of materials with an emphasis on carbon fiber reinforced polymer (CFRP) and glass fiber reinforced polymer (GFRP). These types of composite materials are not new. Industrial components such as heavy duty pumps have used these materials for 4 decades. However, their use in cars has always been limited. That is now changing as an emphasis on weight savings becomes tied to fuel efficiency. Weight savings to offset heavy battery packs is also a consideration.

A Hybrid Drivetrain Of Course
The show car featured a 1.5 liter, three cylinder, hybrid drivetrain with a lithium ion battery pack. Sadly, there is likely to be more of this kind of tiny fuel sipping underpowered drivetrain technology to work through before the world decides if it wants its premium cars to also be performance cars (or not). The press release for the Crosslane states it will accelerate to 60 mph in 8.6 seconds. That is about as fast as a 1990 Honda Civic. Not terrible, but it doesn’t cause heart palpitations. The press release also says the vehicle gets 213 mpg. We read it two times. Then we checked again. Not 21.3, but rather 213 mpg. That would make this car about 5 times more fuel efficient than a Fisker Karma. If Audi can build this car with this drivetrain for less than $50,000 it will immediately be the world’s most popular premium cute’ute. We doubt it can even come close.

LG's New EV Battery Plant Is a Welcome News for Tesla
Tesla Giga Berlin's New Hurdle: It's Not Only the Gov't, but Now Tesla Itself
END_OF_DOCUMENT_TOKEN_TO_BE_REPLACED