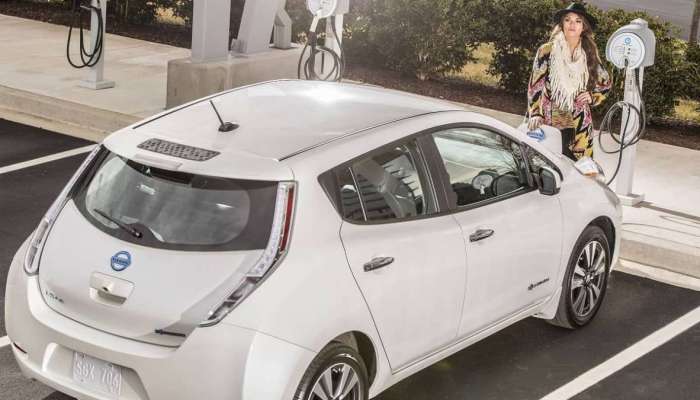 A new study looking at resale values after five years of ownership finds that many popular EVs have very high depreciation. Here's five reasons why they do.
Advertisement

A new study by iSeeCars.com researchers looked at the five-year depreciation and retained value of used cars in America. Among the top-ten vehicles that drop in value the most, four are electric vehicles. Included are the Nissan Leaf (first generation), Chevy Volt, Ford Fusion Energi, and BMW i3. No conventionally-powered vehicles of their same price range and size devalue anywhere nearly as much. So why do EVs devalue so much? 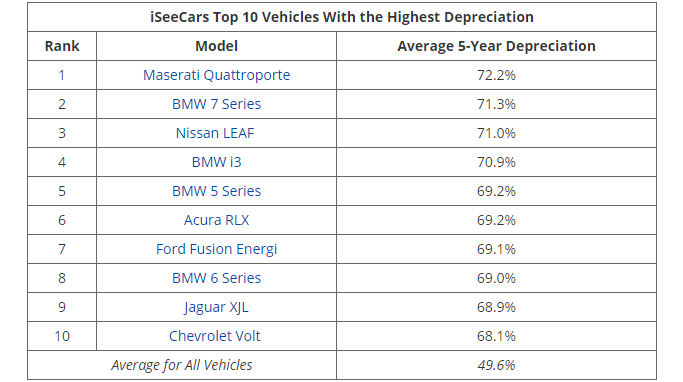 EV Devaluation Reason 1 - Incentives On New EVs
The number one reason that EVs drop dramatically in value the moment they are sold is incentives. The federal government offered tax breaks of up to $7,500 on all of the four EV models listed in the top ten most depreciating vehicles. In addition, many states where EVs are promoted offer thousands more in incentives paid directly to the first owner. Utilities and local governments also offer incentives. We have covered this for years at Torque News and often point out that the MSRP of a new EV has very little to do with the actual cost to the owner. The Nissan Leaf and Chevy Volt have both been available in key EV target states with a cost to the consumer of about half their MSRP. So, obviously, as soon as that vehicle is sold its value is reduced by the total of the incentives. After all, any shopper looking at a used vehicle is smart enough to know that if a new one is going to cost them less, they should buy new.

EV Devaluation Reason 2 - Rapid Evolution
Five years ago a battery-electric vehicle with a range of 100 miles or so was typical. The first-gen Volt EREV had 38 miles of EV range. Today, these low range numbers seem almost ridiculous. Early adopters grabbed some early EVs with these limited ranges and good for them. Today, any range under 225 miles for a BEV is considered rather silly. There are just too many better offerings in all of the price categories. So, the value of many local area-only short-range EV models has dropped like a rock.

And it isn't just range that improved. Safety did as well. Performance did. Amenities were added. Five years ago EVs were cool for their day. Today they seem a bit past their due date by comparison to the options now on the market. 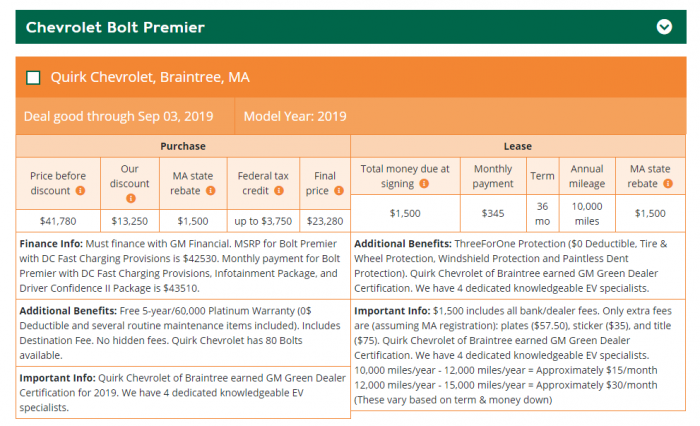 EV Devaluation Reason 3 - Insane Discounts On New EVs
Chevrolet dealers in key EV target states have offered discounts off new-generation BEVs like the Bolt of as much as $14,500. This in addition to the incentives we listed above. Apart from the price supports being offered by the public sector, the private sector is also dumping EVs on the market via massive discounting. This kills the value of used EVs,

EV Devaluation Reason 4 - Few Buyers Want An EV
The green vehicle market in America - of all types including hybrids - is about 3% of the total private vehicle market. That means 97% of Americans don't buy an EV - or any type of green vehicle. We can all wish the truth was different, but Chevy dealers in Mass weren't discounting Bolts this summer by five-figures because customers were lined up to drive them home. EVs are a niche market and so too is the used EV market.

EV Devaluation Market Reason 5 - Batteries
Whether it was fair, based in truth, or a myth, EVs have been pegged with a reputation for having batteries that perform differently over time. The perception is that EV batteries lose meaningful range as they age. Tesla owners discuss this on Tesla forums. Chevy owners do so on Chevy forums. The difference for the EVs on this list is that all of them had pretty limited battery capacity to begin with. Losing any is a cause for concern for some buyers.

The fact that these EVs have low valuations after five years can be looked at two ways. On one hand, it is a problem for EVs to be pegged as vehicles that don't hold their value. Tesla went so far as to offer resale value guarantees on the Model S when it launched to address these concerns. On the other hand, if you are in the market for a used EV, you are about to get a fantastic deal!

Check out the full report by iSeeCars here.

DeanMcManis wrote on October 30, 2019 - 5:40pm Permalink
Actually only the early Nissan Leafs had any appreciable loss in range. Other EVs do have a tiny loss in EV range, but it is minimal. Of the reasons given above for depreciation, the biggest ones are the federal and state subsidies. It is true that the added federal and state money that made EVs easier to buy new meant that used model prices had to drop to match the lower new EV pricing. But a lot of the loss is on paper because even though a new Leaf had a MSRP of $30K, the buyers were really only paying $20K out of pocket. So even though it looks like they immediately lost $10K of value, the original buyers got that money paid back up front (either with a check, or by getting a lower lease payment), and the depreciation after that is pretty normal. In fact I think that it ends up being a great incentive for buyers who want a super economical, newer car without having to pay a high premium can find great deals with used EVs. Also even though the early BEVs have a smaller range than new models, the 60-80 miles is just fine for many people. Also except for the Maserati, Jag, and BMWs, much of the list is plug-in hybrids. And because PHEVs have a gasoline motor and lose almost no EV range, used models perform nearly the same as new models do. In fact because most PHEvs are driven mostly using their electric motor, the gas engines are hardly used. When I returned my Chevy Volts off of lease one had 36K miles, and one had 48K miles, but they were almost only driven electrically, so there was only 1-3K miles on the gas generator motors, plus because braking regeneration saves the brakes, they were also nearly new. And the electric motors have almost no maintenance when compared to internal combustion engine (ICE) cars. So it can be argued that used plug in hybrids are actually some of the best used cars to own. And finally because you can get these nearly new used EVs for a super low price they open the newer EV market to many people who had never owned an EV before. I have bought the last two of my PHEVs used, and got a great deal on both of them, but it was also relatively cheap for me to lease my first two PHEVs, because the lease cost was just a bit more than I had been paying for gasoline alone. So I won out leasing PHEVs, and won out buying used PHEVs. Teslas are still more expensive used than the early lower range EVs, and they still retain their value about the same as most luxury cars because they don't lose much range and are still competitive against newer EVs.
John Goreham wrote on October 30, 2019 - 9:05pm Permalink
For the first time, I think we may be in complete agreement!
DeanMcManis wrote on October 31, 2019 - 10:31am Permalink
It was bound to happen sometime.
Mark Day wrote on October 30, 2019 - 8:36pm Permalink
From JG: "We can all wish the truth was different..." - Define "We".
John Goreham wrote on October 31, 2019 - 11:14am Permalink
Haha. "We who want EVs to get better."