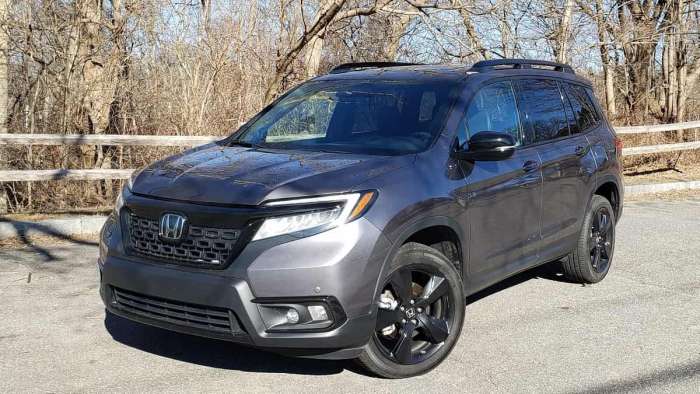 Honda's new Passport just proved itself superior to the best in the two-row crossover segment. In a comprehensive comparison test, the new Passport rose to the top in many objective categories and also won the hearts and minds of testers. What is most interesting is that the three-row Honda Pilot, which shares a lot of its parts with the Passport, finished last in a Car and Driver (CD) comparison not too long ago.

We won't spoil too much of the CD comparison test, but the aging Nissan Rogue finished last. CD's staffers found the engine "raucous," didn't like the CVT (because the secretly all want to drive stick shift 1990 BMW 3 Series cars) and found the space inefficiency of the Murano a big negative (we have to agree). However, the Murano did have the best overall ride of the group.

The price tags of the vehicles compared ranged from just under $40K for the Hyundai Santa Fe Ultimate AWD, to a whopping $50,765 for the new Chevy Blazer. The Honda Passport Elite AWD was almost exactly in the middle of the pack with a price of $45,695.

This price includes a modern V6 engine. Although some of the competitors had 2.0-liter turbocharged engines, the Honda Passport had the fastest acceleration time and the fastest passing time in the group. Add to that the best real-world MPG as well and you can see that small four-cylinder turbos really don't match the power and efficiency of a good V6.

CD liked that the Passport was big on space and drive small. The summary of the verdict said that the Honda Passport had, "The best combination of utility and driving pleasure also comes with a reasonable price tag."

Torque News hopes to have a chance to do a full test on the Pilot soon and will bring you our conclusions. Based on our first drive, we are pretty sure we will be in agreement with the folks at Car and Driver.

Armen Hareyan wrote on May 8, 2019 - 6:17pm Permalink
No wonder it tops all rivals in sales. The Honda Passport has a great looking design.
J P wrote on May 8, 2019 - 8:57pm Permalink
I have a hard time calling Honda’s engine modern because of the use of timing belt rather than chain.
Mark Day wrote on May 9, 2019 - 7:07pm Permalink
Never would have guessed that Honda uses a timing BELT on an interference engine. Do manufactures, like Honda, make sure to design their vehicles with at least one major flaw - seems so. The belt issue is enough for me to declare - no sale.
Mark Day wrote on May 9, 2019 - 1:26am Permalink
Put the Passport's drivetrain (V6) in the CRV and I'd be interested.
Mark Day wrote on May 9, 2019 - 7:11pm Permalink
This comment, regarding the CRV, was make prior the learning that Honda's V6 engine uses a timing belt rather than a chain.
Bruce wrote on May 9, 2019 - 7:04pm Permalink
Excited to ride in the Passport but wonder why Honda didn't bring back an updated Element instead. They were a true utility crossover that is sorely missed in today's cookie cutter SUV market.
John Goreham wrote on May 10, 2019 - 4:52pm Permalink
I have friends that owned and LOVED their Element. My fishing buddy had one for years and he also camped in it. Like the Toyota FJ Cruiser, the Element had a passionate fanbase, but low unit sales. Unfortunately.
RMV wrote on May 31, 2019 - 7:43pm Permalink
Our 2004 Honda Element EX is still going strong with 112K miles on it. We haul bikes, dogs, and kayaks; camp in and with it, and have taken multi week road trips in it. I’ve cross-shopped everything on the market and can’t find a decent substitute. I’d love to have Carplay and safety features but I guess I’m driving it until it falls apart!