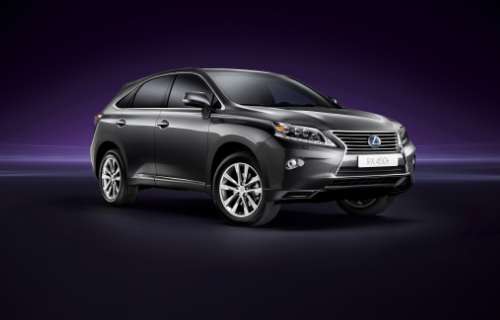 Lexus is trying to shatter its conservative image with a bold new look to the 2013 RX350 and 2013 RX450h that will increase sales, but not risk the epic fail one of its competitors suffered recently.
Advertisement

Lexus chose the Geneva International Auto Show to unveil updates to its leading seller, the RX350 luxury utility vehicle featuring its new “spindle grill.” As part of its effort to inject more pizazz into the looks of its cars and crossovers, Lexus has redesigned the front end treatment of its vehicles. The look was first revealed on its most disappointing seller, the GS350 sport sedan. Launched just recently, the newly styled Lexus sedan’s sales have skyrocketed, increasing over 500% this past February vs. the same period last year. The car would seem to be an unqualified success for Lexus.

This success must have come as a relief to Lexus management as they unveil their breadwinner, the RX model line, and its new bold look. The RX accounts for a very large portion of Lexus sales and it outsells their second most popular model, the ES350, by a ratio of 2 to 1. The spindle grill harkens back to Toyota’s past as a company that made equipment for the textile industry. None of its customers will see the grill and think that, but they may like what they see. The look adds a more aggressive look to the line and the grill treatment is expected to roll out through all model lines as Lexus updates the fleet.

Changes like this can be risky for car manufacturers. Acura tried a grill treatment referred to as the “shield” look that did not win over new buyers in the way the company had hoped (to put it mildly).

Like every luxury car has done, the new RX will have LED lights up front now. Other exterior treatments include more bling in the form of added chrome in an optional appearance package.

Lexus has also made some non-cosmetic changes to the RX line. The RX450h hybrid will now have a sport mode. Having recently tested the RX hybrid we will say this is a wise decision. We have driven the CT200h hybrid by Lexus and the sport mode is a feature we like. The CVT transmission takes some of the punch out of the 3.5 liter V6 in the RX450h and a sport mode might restore a bit of the fun that can be felt in the non-hybrid version of that drivetrain. A very positive change to the drivetrain in last year’s model continues. That is the switch to 87 octane fuel. That change alone increased the RX’ fuel economy by about 10%.

Lexus’ new spindle grill now added to the 2013 RX350 has improved the looks of its vehicles, and judging by the huge sales increase in GS, will continue to help the manufacture put smiles on shopper’s faces.