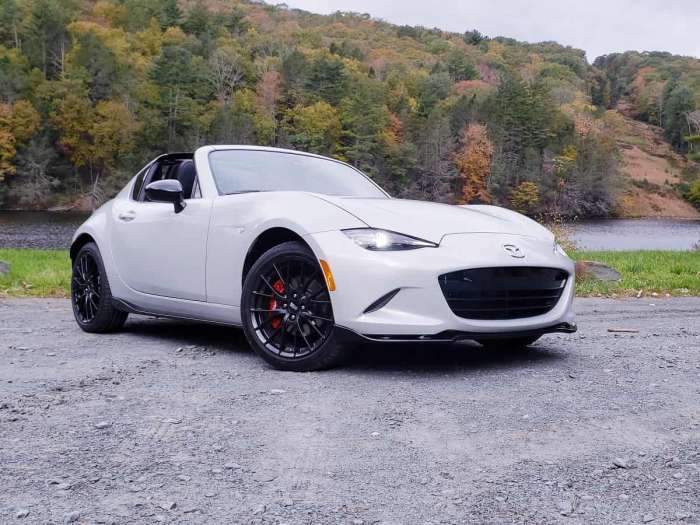 The New 2019 Mazda Miata With Engine Upgrades Does Not Disappoint

We test the 2019 Mazda Miata with the new engine updates and come away smiling.
Advertisement

When we first heard the news that Mazda had increased power and torque of the Miata for 2019 we wondered just how noticeable the changes would be behind the wheel. In a nutshell, they are noticeable and you will love the new feel. The new car feels more powerful when starting off in first, through second gear, and also in the higher RPM ranges in all of the first four gears.

We started our test at the Monticello Motor Club in New York State. MMC is nestled deep (very deep) in the woods and is surrounded by roads with 45 MPH and 55 MPH speed limits that may well be the best in the Northeast. The roads are well paved, have fantastic elevation changes, and are almost never straight for more than a quarter mile. The frequent twists and turns, many of which feature downhill or uphill elevation changes keep you moving up and down in the gears and allow for legal enjoyment of this vehicle which is really in its element here. We had planned for on-track testing, but unexpected low temps (38 F at track opening) and summer-only tires nixed that. It was almost just as well. It gave us more on-road time alone with this amazing car.

Our tester was a fully-loaded Miata Club RF complete with the limited slip differential. Manual transmission of course.

You can feel the 181 hp and 151 lb-ft of torque as soon as you set out. Although we did not have a prior-year car for direct comparison, we have tested the new generation Miata with its formerly 155hp for about 4 weeks in total and have tracked it twice. Our seat of the pants conclusion is the new engine is now perfect. Forget more power. The prior engine could propel the lightest trims to 60 MPH in under 5.9 seconds. This new engine feels capable of about a half-second quicker times.

Numbers aside, what is most important is the sensation. All Miatas feel faster than they are due to their size and roofless design. This one feels very quick. As luck would have it, we drove a number of other cars on this same day*. Including a 2019 Golf GTI, 2019 Hyundai Veloster Turbo (DCT) and 2019 Toyota 86 GT. The Miata feels faster than all three. In terms of bang for the buck, it is hard to think of another sports car as quick as this new Miata.

One feeling we will remember is the added thrust between about 4,000 and 6,500 RPM. We used this range of engine speed on much of the drive and the Miata pulls hard in this range. It also sounds fantastic.

As a prior Miata owner (NC Grand Touring), and frequent lucky tester of the Miata, it is hard not to call this new Miata perfect. It now has the power and torque it needed to match its other impressive capabilities.

Postscript - You're also going to love the telescoping wheel!