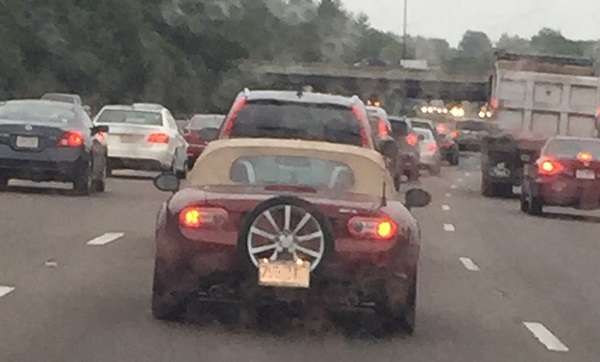 Owners of Mazda Miatas have struggled with the spare tire issue since 2006. No more.
Advertisement

The above photo is not Photoshopped except to hide the plate number. It is a real image taken by a sharp-eyed Torque News fan this week in Mass. We would like to say that we think it is a test mule for the new “Continental Kit” 2016 Miata. However, we suspect it is actually a very smart NC generation Miata owner’s own creation.

The 2006.5 through 2015 Mazda MX-5 Miata has no spare tire, and the tires are not run-flats. There is no plan other than to call AAA for a tow if one gets a flat, or tears a sidewall on a pothole. Sure, Mazda puts a can of goop and a compressor that adds one PSI per hour in the trunk, but we all understand that is strictly for show.

We have obscured the plate number to protect the identity of the owner of this Miata. If that owner is you and you would like to share your story, please enter a comment below and request that we contact you. No need to reveal any phone or e-mail in the text of your comment. Just say it is you, and we will reach out. We will ask you to confirm your plate number to us, and we would love to do a short interview and publish your story here at TN.

As the former owner of an NC Miata, I can admit to trying to stuff a tire into the trunk to see if it would fit (nope). And failing that to asking a local Miata dealer if I could try to stuff an RX-8 compact spare into my trunk to see if that would work. They would not play along. So, like many Miata owners I drove around for many years with a repair kit of my own making in the trunk consisting of a plug kit, Fix-a-Flat, and the AAA phone number carefully noted. I had two flats during my four years of ownership and wish I had thought of that ingenious kit idea.

So is this kit a practical idea, or a horrible carbuncle on the backside of a beautiful car? Tell us your thoughts below.

Richard wrote on June 14, 2015 - 5:06pm Permalink
I'd rather tow a small trailer containing a spare and someone to install it. I think the continental kit doesn't look good enough and ruins the overall look of the car.
Soakee wrote on July 14, 2015 - 4:26pm Permalink
I've owned a NA and currently have an NB Miata. If for whatever reason I decide to trade for a used NC, I will put run flats on it.
Phil Thomas wrote on October 24, 2015 - 2:30pm Permalink
I have a 2016 MX-5 on order and understand that neither a real spare or mini-spare will fit in the trunk. What about a real tire, but not mounted on a rim? Although having to be towed to a garage with a flat that can't be repaired with the kit provided is bad enough, there's also the strong possibility that many places won't have the right one in stock. That's where an even longer wait time would be likely. At least, if you have the right tire with you, that would help. So, assuming that one is willing to sacrifice the trunk space, will a tire even fit?
Dale Pelfrey wrote on November 4, 2015 - 11:40pm Permalink
Run flats are bad : heavy , expensive , hard ride . Adding a full size spare that can be changed fast & doesn't use storage space . Great idea ! With a little fairing aero is better . Offsetting extra weight . Front to back balance is improved .I would love to find one for my Miata . Car doesn't have a jack ($99) extra . My GTRdoesn't have a jack ( $ 300) added full size tire& wheel in trunk. Less worried about a flat!
S. J. Gile wrote on November 25, 2015 - 9:01am Permalink
Great idea where can I get one?
Richard wrote on February 18, 2017 - 9:42pm Permalink
Very simple. No spare, no buy.