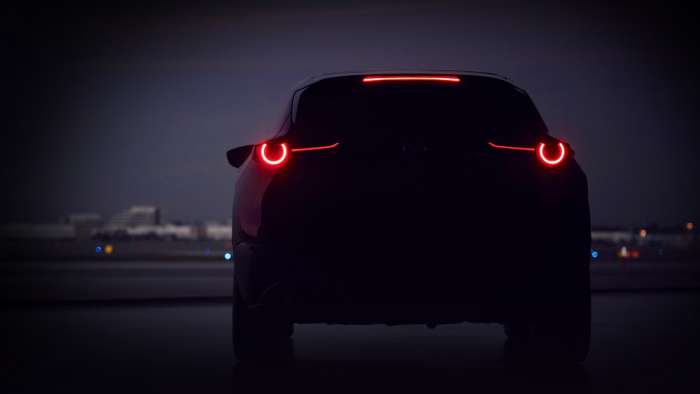 Mazda Teases New Crossover Model - Will It Be Larger Than CX-5?

Mazda shows off a new crossover model in one month. Will it be a more car-based two-row crossover?
Advertisement

Mazda has just teased us with an image of its all-new crossover model. Mazda says that this new crossover will be shown for the first time at the Geneva auto show in early March.

It is hard to know exactly what Mazda is planning. Geneva is a global show, so the new Mazda crossover could be relatively small. That would mean a crossover smaller than CX-5. However, if the model is for the U.S. market, the new crossover may be a more car-based crossover about the size of the CX-5.

Why do we keep referencing the CX-5? Simply because it is Mazda's only successful vehicle in the U.S. market, now accounting for over half of the brand's total monthly sales. We don't mean to say that Mazda's other vehicles are not fantastic. If you read Torque News regularly you know we consider the Mazda3, Mazda6 and Miata to be the best in their classes. However, as good as these three are, they sell in low numbers. The CX-5, by contrast, is a very strong seller. This is partly due to the fact that the CX-5 resides in the largest segment by sales overall.

Looking at the teaser, we see a relatively low roofline. This is an indication that the new vehicle is not an SUV-type crossover (like the CX-9), but rather more of a car-based "all-road" crossover like the new Jaguar I-Pace.

Mazda has told us almost nothing of this new vehicle except this: "The powertrain lineup comprises the latest Skyactiv engines, including the revolutionary Skyactiv-X, which adopts a unique combustion method to combine the free-revving performance of a gasoline engine with the superior response of a diesel."

We also suspect that this new crossover may eventually be built in Mazda and Toyota's new joint venture plant in Alabama. With a President considering steep import tariffs on vehicles, this plant cannot come too soon for Mazda.

Check back on March 4rth to see what Mazda is about to reveal.

Contheon wrote on February 9, 2019 - 7:32am Permalink
The CX-5 might be a great driving crossover, but it's really limited on utility. Cargo space with the rear seats in any position fall far short of the RAV4 and CRV. Meanwhile, the CX-9 exterior dimensions are actually larger than the new extended Pilot … neither would fit in my garage. Mazda has a noticeable gap in the line-up, and it's right between the CX-5 and CX-9. So like you, I hope they close this gap. Mazda has made a lot of progress and they are well engineered... they just need a more competitive line-up.