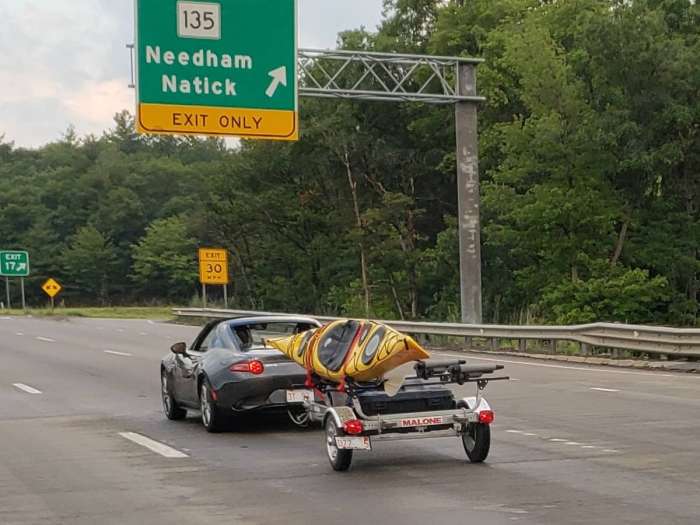 Own a Mazda Miata and planning to tow? Here is some good advice from an owner who has done it successfully.
Advertisement

Earlier this year, Torque News spotted an amazing Mazda Mita towing rig. We did a short story reporting what we saw and hoped that the owner of the cool trailer and cargo rig would contact us. As luck would have it, the owner, Ken, did reach out. Here is some more information for those who may be interested in replicating the amazing trailer and some good advice from a fellow owner on how to tow with your roadster.

TN - Hello Ken, and thank you for agreeing to share your knowledge. Please tell us a bit about how you came to be a Miata owner.

Ken - My journey began in a Chevy K5 Blazer. The plow blade on that thing weighed more than my Miata. Over the decades, as needs changed, I have driven an Odessey minivan, a Civic (roll down windows, no A/C) an Explorer then a CR-V. Now that carpools and tuitions are done, I wanted to try something fun. No attitude, just fun.

TN - Tell us a bit about your passion for Kayaks.

Ken - I have been Sea Kayaking for about 40 years. I’ve explored most of Boston’s inner and outer harbor islands, the North Shore and Scituate, both alone and with others who want to experience island exploration that have never paddled before. Interesting combination; a kayak is a boat you wear. You don’t ‘get into’ a Miata as much as you ‘put it on’. I’ve heard the Miata called a motorcycle with doors. After half a dozen bikes, I can attest that a Miata shares the type of fun, with far less danger.

TN - Tell us about the cool trailer setup. How did that come be?

Ken - I’ve put sea kayaks on top of all my vehicles. In the Miata.net forum, there is an abundance of advice for hauling everything from cargo trailers, to race wheels, to ‘half a Miata’. The weight of a pair of sea kayaks fully loaded with gear is far less than some of the other rigs I’ve seen. After looking at Yakima’s and Malone’s kayak trailers, I chose Malone for the balance of workmanship, storage and price. The trailer, with aluminum wheels, diamond plate inserts, retractable tongue, and spare, was under $1500 delivered. My son and I built it in our garage in an afternoon with common hand tools, then modified the trailer with 5” wheels on the rear of the frame to allow for vertical storage.

TN - How about that hitch and wiring. Connecting one to a Miata is tricky. Who did that work for you?

Ken - The hitch is a Hard Dog hidden hitch. The hitch and wiring harness were installed by Osprey Automile in Westwood, MA. I looked at UHaul and Yak Attack but chose Osprey for a few simple reasons. First, I needed this done absolutely right. The first time. With no damage to the brand new vehicle. Second, the people I met, from the owner to his wife at the front desk, to the technician who walked me through the procedure, to the manager, Jason (who oversaw the install), were absolutely competent and professional.

TN - As a fellow Miata owner (past and future) I have always wondered what towing with a Miata is like. Can you tell us how it feels and share any advice you might have?

Ken - Hauling two 17’ kayaks with full cold weather and safety gear is a breeze. I’ve learned a few things you should know: 1. Triple your normal following distance. 2. Stay below the posted speed limit, especially on the highway. 3. Brake early and gently. 4. When changing lanes, make sure you have ample clearance for the trailer. 5. Brake before a turn, accelerate leaving the turn. 6. Practice backing up in a local park early on a Sunday morning. 6. Assume you are invisible, and that even if they see you…they are too busy on their cell phones to care.

TN - Any final words of wisdom?

Ken - Advice to anyone considering this set up; when you’re in a parking lot loading or unloading, a lot of different folks are going to get interested. Be nice. It sounds so silly. Be nice, answer their questions, ask what they do with their boats or trailers, if they have ever driven a manual transmission, if they have ever explored the islands. It sounds so trite… be nice.

That is great advice. Our sincerest thanks to Ken for sharing his story.

LG's New EV Battery Plant Is a Welcome News for Tesla
Tesla Giga Berlin's New Hurdle: It's Not Only the Gov't, but Now Tesla Itself
END_OF_DOCUMENT_TOKEN_TO_BE_REPLACED