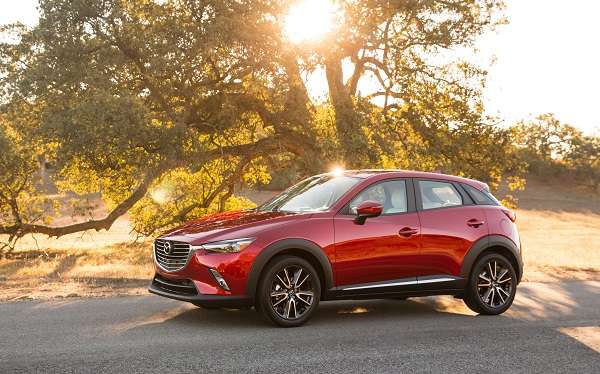 The EPA says that the Mazda brand has both the best MPG and the lowest CO2 without using the most common two tricks.
Advertisement

Mazda’s SkyActiv technology saves more fuel and reduces CO2 production better than the brands that resorted to small, lagging turbo engines, and those with the CVTs consumers tend to dislike (though we have come around on them). This according to the EPA's newest report covering 2013-2015. The brand has not taken the usual path.

According to the EPA’s Light Duty Fuel Economy Trends report, Mazda has an adjusted corporate average fuel economy of 29.4 MPG. Its CO2 production per mile is 328. Both are the best in the industry*. Mazda says this is the company’s third consecutive year with the best fuel efficiency.

The folks at Mazda are obviously pleased. Jim O’Sullivan, president and CEO, Mazda North American Operations, commented, saying, "At Mazda, Driving Matters and so does fuel economy. Using SKYACTIV Technology, Mazda has been able to achieve class-leading fuel efficiency in nearly every segment it competes in. This achievement verifies that Mazda has evolved to offer what others can’t, vehicles that are of high-quality, great looking, fun-to-drive and fuel efficient.“

Torque News saw this coming. In our mid-2014 story, Are turbo gas engines and diesels killing Volkswagen America?, we compared Mazda vehicles to VW’s, all of which used small turbo engines. It is hard to argue that VW made any gains using the turbocharger-intensive engines.

*Although Mazda is the mainstream automaker with the best fuel economy, it should be noted that Tesla offers all-electric vehicles to those buyers who can afford them.

Chris wrote on December 16, 2015 - 8:16pm Permalink
This doesn't diminish Mazda's accomplishment, however it should be noted that they don't sell pickup trucks or offer higher output engine options such as V6's (the lone exception being the outgoing CX-9, which uses an ancient Ford sourced V6.) one side effect of this is that it helps keep their overall fleet fuel economy down. That being said, all of their individual models, excluding the aforementioned CX-9, are at or near the top of their respective segments in fuel economy. What I find most remarkable about this is that Mazda was left for dead by many when Ford sold off it's controlling interest in the company a few years ago. They no longer had access to Ford's deep pockets and they no longer had a major partner to share development costs and vehicle components with. Instead of hurting Mazda though it made them better. Their products are more appealing than ever. Automobile journalists constantly rank their vehicles at or very near the top of their segments. Consumer reports has ranked them as high as #2 in reliability, behind only Lexus, and as low as #3 in the past couple years. And Ford? You won't find them until you hit the mid 20s! Consumers are finally starting you stand up and take notice. Sales are steadily growing and Mazda is once again profitable. Next year Mazda is set to completely purge themselves of the only remaining Ford DNA in their lineup when they release an all new CX-9. With that change, expect their overall fleet fuel economy to once again break records.