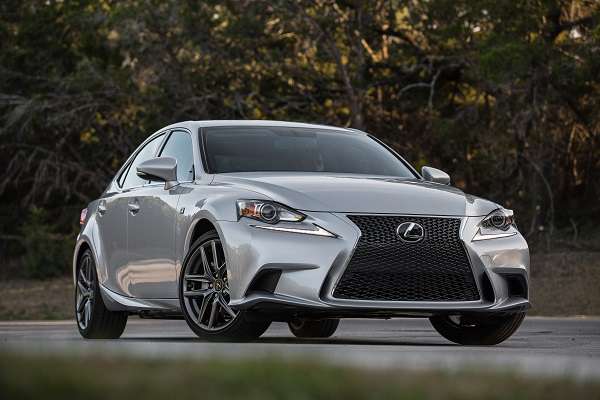 The new Lexus IS redesign for 2014 was a huge success. As Lexus moves from its 2014 model year to the 2015 the IS is now headed to number two in sales behind the BMW 3-Series.
Advertisement

When Lexus launched the new 2014 IS line of compact sports sedans one year ago it was truly the underdog in the class. BMW owned the top spot, and had for literally decades. Nissan’s Infiniti G37 was considered the “value” BMW choice. Infiniti offered similar or better performance at a lower cost. Over the past year, the Lexus IS has overtaken the Infiniti offering and the sales curves are currently in favor of the Lexus in a big way.

Infiniti's Unusual Sales Strategy for 2014 G37 and Q50
Infiniti also launched a new compact sports sedan in 2014 to replace its successful G37. The new vehicle was to be called the Q50. We drove the Q50 on roads and on the track and found that it had changed its personality entirely. The Q50 now feels bigger, is bigger, and it drives much more like a luxury car than a sports compact. There is nothing wrong with this, but Infiniti is moving away from the class the G37 had been strong in. Apparently the customers are not.

Interestingly, Infiniti kept selling the G37 with lower content than the Q50 in an attempt to try to cover more of the customers’ needs. It is hard to say it has worked. For the year the G37’s sales are down to less than half their prior sales volume. The Q50 is selling OK, but in combination, the Q50 and the G37 sedans do not match Lexus’ new sales volume. Lexus has now passed Infiniti in monthly sales in one of the most important segments to these automakers.

Audi A4, Cadillac ATS, Mercedes C-class
Just to be sure we were not missing something we also compared the 3,932 units Lexus sold to Audi’s A4 (3,365). We checked Cadillac’s new ATS sedan’s sales as well (2,358). Mercedes may have sales higher than the Lexus with its C-Class, but Mercedes does not break out the sedans from the coupes, so we are not certain that the 5,607 C-class vehicles it sold included more sedans than Lexus. It could very well have. However, Mercedes C- class sales are in a nosedive, with monthly sales down 27%, and year to date C-class sales down 28%. The new front-drive, entry-level CLA sells in relatively low numbers, less than 1,700 were sold in June.

One thing we do know for sure is that the Lexus IS is a big hit for the brand, and the IS 250 and IS 350 are pulling ahead of the Infiniti Q50 heading into the 2015 model year.

Related Stories:
Infiniti's Q50 is an exciting alternative for shoppers of the BMW 3 Series
Infiniti will offer older G37 alongside new Q50
Back to back drives 2014 Lexus IS 350, Infiniti Q50, Cadillac ATS

Aaron Turpen wrote on July 14, 2014 - 3:35pm Permalink
You failed to mention how many IS vs Qs were sold. The number is a whopping 100 more units for one single month. That's probably within the margin of error..
John Goreham wrote on July 14, 2014 - 5:29pm Permalink
I'm glad you added that, and it is true. We have been watching. The IS has been increasing and the Q50 and G37 combined decreasing. Also, I hope I was fair in the story about the Mercedes C-Class. It may be the number two car in the class. For now.
Aaron Turpen wrote on July 15, 2014 - 1:10pm Permalink
It should also be pointed out that the Q is not a new model, it's virtually the same as the G before it, whereas the Lexus IS is all-new for this year. That also makes a huge difference in sales. When the new Q50 comes out, I suspect fortunes will reverse once again. Plus I disagree with your "no longer sporty" comment about the Q. Drive-by-wire makes up for the larger car size and it felt plenty sporty to me on the race track and the street.
John Goreham wrote on July 15, 2014 - 1:21pm Permalink
I'm not sure I agree. Here's what Infiniti says about it in its early press announcements: - •Q50 sets a fresh design, performance and technology direction for new generation of Infiniti vehicles - Building on Infiniti's renown sports sedan styling, performance and ground-breaking technology, the ALL-NEW 2014 Infiniti Q50 was designed to create a new, distinct level of customer engagement - propelling Infiniti in a bold new direction as a brand and as a provider of a unique luxury performance experience. = = I added the caps for emphasis. I know the interior is all-new and not shared with the G37. I don't think it shares any body panels either. We know the steering system is entirely new and separate from the G37. - I do agree with you that the car is very sporty. It just seems more mature and frankly, like more than a sports sedan. It is weird to say this, but I think it is really too much. It is sort of in its own class separate form the compact sports sedan class. I think that is hurting its sales. Could it be too grown up? Just my opinion.
Aaron Turpen wrote on July 15, 2014 - 1:33pm Permalink
You're right, it is "all new" in terms of exterior and interior design. I was thinking of the QX (I'm not big on all these new names automakers keep throwing out there, most of which are just numbers and letters). Anyway, the Q50 to me is a beautifullly-balanced luxury sports sedan and so is the IS350. Having driven both, on and off the track, I'd say that they're roughly equal in terms of total performance. What I miss in the Q50 is a suspension-altering "sport mode" adjustment like in the IS350. On the other hand, very very few drivers will actually take these cars on the race track. I suspect sales differences are largely to do with marketing and a lack thereof.
John Goreham wrote on July 15, 2014 - 1:37pm Permalink
Well said. When the new car came out I wrote a story hinting that the head of marketing for the Infiniti Q50 and G37 would get "fired." I think he did move to another position. There are no bad cars in this segment. I'd be very happy with any of them.