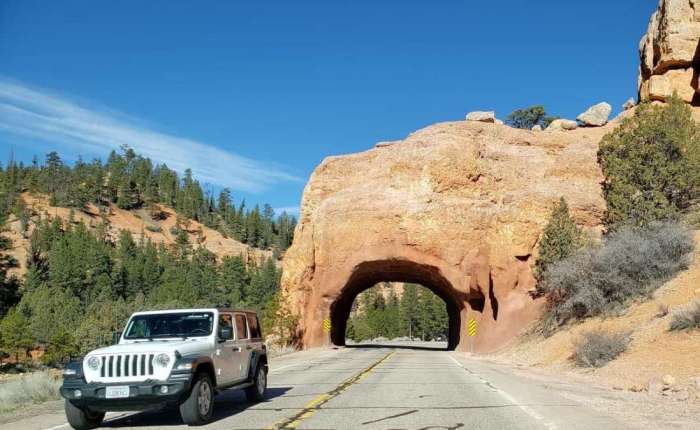 The Jeep Wrangler has the lowest depreciation and highest retained value of any vehicle after five years. Here's why it is the best vehicle to keep for five years.
Advertisement

A study just released by iSeeCars.com has named the Jeep Wrangler the best vehicle to keep for five years. This based on its extremely low depreciation and very high value retention over that span. iSeeCars.com came to this conclusion after analyzing more than 8.2 million car sales to identify models with the lowest and highest loss in value after five years.

"While the average new vehicle loses almost half of its value after five years, there are vehicles that retain more of their value and depreciate less than average,” said iSeeCars Executive Analyst Karl Brauer. “For consumers who purchase new vehicles and plan to sell them in the first 5 years of ownership, choosing a model that retains the most value is a smart economic decision, especially when you consider depreciation is the single large ‘cost' to owning a vehicle.”

Related Story: You Must See This Jeep Wrangler Rubicon Pickup Truck- No, It's NOT a Gladiator 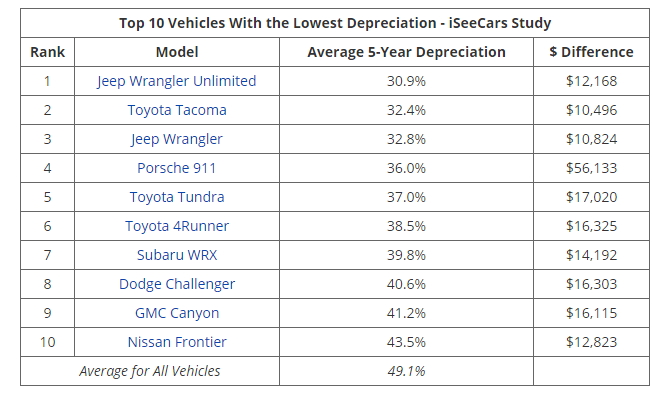 “Jeep Wranglers are known for retaining their value due to their enduring popularity, as well as their durability and performance across all terrains,” said Brauer. “Jeep Wranglers also have maintained their iconic design, so even older models don’t appear dated.”

Pickup trucks also make the top-ten list, including the second-ranked Toyota Tacoma, the fifth-ranked Toyota Tundra, the ninth-ranked GMC Canyon, and the tenth-ranked Nissan Frontier. “Toyota trucks have a well-earned reputation for reliability and quality, and the Tacoma and Tundra appeal to consumers who want a rugged hauler and those who want a dependable family vehicle,” said Brauer. “The redesigned GMC Canyon holds its value due to its heightened demand from its production hiatus for the 2013 and 2014 model years, making the all-new 2015 model a desirable used truck. Even the Nissan Frontier, which hasn’t seen a redesign since 2004, holds its value because it’s among the most affordable pickup trucks on the market.”

Surprisingly, sports cars account for three models on the list. We are not surprised to see the basically hand-built fourth-ranked Porsche 911 appear here. However, the seventh-ranked Subaru WRX, and the eighth-ranked Dodge Challenger were a bit of a surprise given the stereotypes on how those vehicles are used by owners.

“Porsche maintains a tight inventory, so there aren’t many 911s in the used car marketplace and people are willing to pay a premium because it’s an aspirational car,” said Brauer. “The Subaru WRX is also produced in low supply, while the Dodge Challenger has a competitive starting price for the segment and is in high demand because of its classic nature, iconic styling and strong performance.”

Rounding out the list is the Toyota 4Runner midsize SUV in sixth-place. This body-on-frame SUV depreciates just 38.5 percent after five years. “The Toyota 4Runner has Toyota’s reputation for reliability and indestructibility as a truck-based SUV,” said Brauer. “It has also enjoyed enduring popularity since its release over 35 years ago, which helps contribute to its strong value retention.”

Wondering which vehicles depreciate the most overall? Luxury models of course, led by BMW with its models taking first, second, and tenth overall among the vehicles with the most extreme depreciation over five years. The BMW 7 Series sedan loses a whopping 72.6 percent of its value after five years, amounting to $73,686. “Expensive luxury vehicles like the BMW 7 Series depreciate steeply because they include expensive features and technology that aren’t valued among used car buyers,” said Brauer.

For more details on this study, please visit the iSeeCars study page.