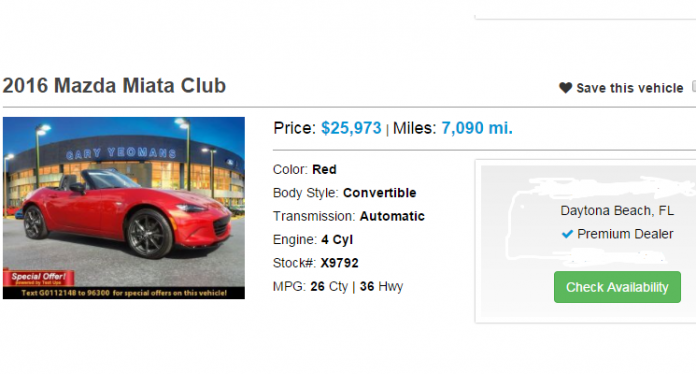 Mazda MX-5 Miatas from the new generation and the 2016 model year are appearing on used car lots and in private advertisements. These cars are almost all still covered by Mazda's bumper to bumper new car warranty. Are they worth considering as an alternative to a new 2017 Miata or Fiat 124 Spider?

Mazda Miata Model Year Background
The new generation of the Mazda MX-6 Miata has been on sale now for about one year. The new generation, called the ND Miata by fans and owners, went on sale in the U.S. market in July of 2015 and ramped up to full volume production over the following few months. The 2016 Mazda MX-5 Miata had a very long model year run of over 18 months before the 2017 model year arrived. That means there is a large population of 2016 model year cars in circulation.
Related: 5 important convertible buying tips

Used Miata Price Data
Torque News researched the pricing of used 2016 Mazda Miatas on three of the top car sales websites, iSeeCars.com, BestRide.com, and CarGurus.com. We set our parameters initially as a 50-mile radius of the Metro West Boston area and then expanded it to a nation-wide search. Our initial analysis revealed that used, low-mileage Miatas are selling in the mid-$20ks in Club trim, and the high $20Ks for Grand Touring models. That price level is not meaningfully lower than the discounted new 2017 Miata price levels.

Miata Club Trim - New vs. Used Price Comparison
For example, on one site we found a 2016 Miata Club with 7,100 miles priced at $25,973. Assuming the dealer offers a generous discount of $750 from that price, the sale price less any fees would be $25,223. The new, 2017 Miata Club has an MSRP of $30,405 including destination fees. Thus, the difference between new and used is roughly $5,000. However, it is common for Mazda Dealers to offer some discount on new inventory. A discount of $2,000 is not out of the question. Therefore, the real-world difference between a new and used Miata is only about 10% of the new car cost.

Conclusion
We also evaluated Grand Touring trims and found the same general result. With the new Miata selling in relatively high volume since late last year, it is likely a better deal for buyers to consider a new 2017 Miata versus a used car one model year older. For those bargain shopping for a Miata who already own a fun car, we would suggest waiting until the weather turns cool in November. On the other hand, life is short and there are four months of prime convertible weather ahead.

For Some Former Daimler Managers Daimler Is Authority, While Tesla Is Like a Startup
How Daimler Unintentionally Subsidizes Tesla Giga Berlin
END_OF_DOCUMENT_TOKEN_TO_BE_REPLACED