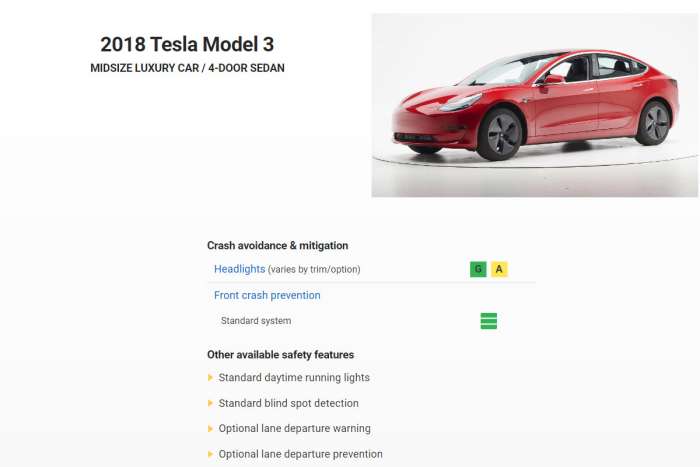 IIHS Plans Tesla Model 3 Safety Test Results For Late Summer - Will It Be a Top Safety Pick Plus?

No Tesla vehicle has ever earned the highest vehicle safety rating in America. That could change late August.
Advertisement

The Insurance Institute For Highway Safety (IIHS) plans to have completed its safety testing of the Tesla Model 3 by late August. Torque News communicated with IIHS and they say that they expect the results to be published very soon after the final crash testing is complete.

Tesla Model 3 - Testing Delayed
The Tesla Model 3 could have been tested sooner, but when IIHS reached out to Tesla last year the automaker was not responsive when asked if the company would like the car to be included in the 2018 Test Schedule. Still, whether Tesla wanted the test moved forward or not, the test by IIHS seems long overdue by we who track IIHS testing. The Model 3 is not a low volume vehicle anymore and is in fact the top-selling EV in America. It is also the top-selling premium car sold in America. So a test three years after its launch seems very late indeed. Consider that IIHS is nearly done with its Audi E-Tron testing. Audi's latest vehicle has just been released. Audi has sold 1,109 E-Trons in America. Tesla has sold 187,000 Tesla Model 3 cars in America. 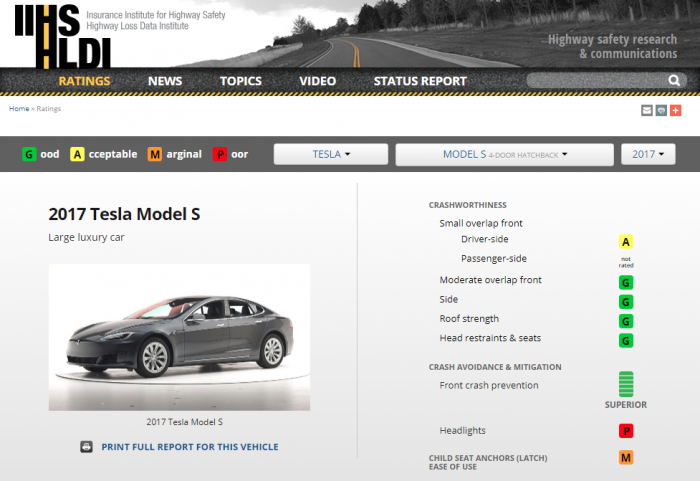 Tesla Has Never Earned A Top Safety Pick Award
Although Tesla markets its models as a very safe vehicles, no Tesla has ever earned a Top Safety Pick award. The Tesla Model S failed to earn top crash test scores when it was first tested. Working with Tesla on safety improvements, IIHS performed a second test. The Model S again failed to earn top scores. Tesla's Model S is also disqualified from earning top scores due to Poor-rated headlights.

Why IIHS Testing Matters
Like many automakers who have a model that cannot score well on the more difficult IIHS testing, Tesla promotes its vehicles as having done well on the easier NHTSA safety testing. IIHS performs its crash tests at higher speeds and also adds other tests that NHTSA does not perform. For example, the small frontal overlap test (now done on both sides of the vehicle) and headlight testing. Earning a good score on the NHTSA test is akin to doing well at the junior varsity level. The testing just isn't as rigorous at IIHS'.

Model 3 Safety Changes
Tesla has made multiple safety-related changes to the Model 3 since its introduction in July of 2017. These were a direct result of safety evaluations done by third-party testers. For example, IIHS had evaluated the Model 3's headlights and found them to score lower than Good. That low rating would have disqualified the Model 3 from earning an IIHS Top Safety Pick Plus rating. Tesla has since changed them and they now are offered in a version that will score high enough for the Model 3 to qualify for the TSP rating if the crash tests go well.

Car and Driver and Consumer Reports also tested the braking of the Model 3 and found problems. As a result, Tesla made changes to the braking system and improved stopping distances.

We wish Tesla best wishes in its IIHS testing. Now in its third calendar year of sales, Tesla has had ample time to make any safety changes and updates to the car it wishes to ensure a good result. Of course, we thought that about the Model S as well.

Watch Tesla Model 3's Potential and Analysis of Trade-Ins and Subscribe to Torque News Youtube Channel for News on Toyota and Automotive Industry.