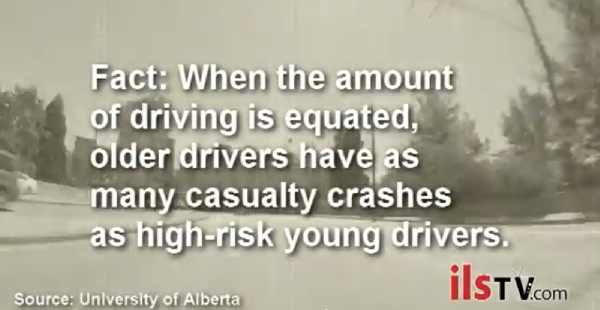 Self-driving cars are here now and some of the systems they use will soon be saving America billions on insurance and repair costs, and more importantly, lives. But will we make the most of these systems?
Advertisement

A friend of the author’s was walking in a hospital parking lot recently when she heard the screech of a car behind her. Turning, she found that an elderly driver had stopped suddenly right behind her and was staring at her with a look of fear and confusion. That is not how many of these stories end. Sadly, the news is full of stories every day end with death or injury caused by drivers who have lost control in a simple situation due to having had too few years behind the wheel, or too many. New driving aids available on affordable cars will soon reduce these incidents to almost zero.

When the number of miles driven by a given age group is factored in the accident and death rate is an inverted bell curve based on the age of the driver. The accident rate is very high at the youngest and oldest years. You may not like that, but a AAA study found “Drivers’ risks to themselves and to other road users decline rapidly until around age 25, continue declining gradually until ages of approximately 65 to 70, begin increasing again around age 70, and increase more rapidly after approximately age 75.” We’ve included this link to the graph and study for your review if this is not something you believe implicitly. The important thing is that help is on the way in the form of driver aids now available on almost all cars, at almost all price points.

Currently on the market are systems that will either alert a driver to an impending front end collision, or stop the car completely. It will not be long before these systems are standard like stability control, tire pressure monitoring, and anti-lock brakes. Some systems can go much further. A few models are now available with systems that will stop the car automatically if the impending collision is with a pedestrian. Toyota, Nissan, and others have demonstrated systems that will do more than even that, including steering to avoid a pedestrian. These systems and ones like them will soon begin to dramatically reduce accidents by all drivers, but most importantly, they will soon end the “unintended acceleration” type accidents so often reported in the news regarding older drivers.

Insurance costs will follow the decline in accidents, but more importantly, insurance companies will soon become wise to the benefits that reporting of such avoided accidents could have. Systems that monitor driving behavior and report that to insurance companies have been in the market as options now for many years. Most large automakers offer it. The idea is that since you are such a great driver, you will pay less if you let the insurance nannie watch you drive. We’re skeptical. However, imagine a driver who has a safety system that helps avoid serious frontal collisions. Imagine further that the insurance companies know that system is used once every 3 to 5 years by most drivers based on data analysis. Now imagine a driver who uses that system 3 times in a month. Would it be beyond reason to ask that driver if everything is OK? Perhaps ask the driver to have both the vehicle and the driver “checked for proper functionality” before an accident that the system cannot prevent happens?

Obviously, such a scenario will take some political will, and some participation by drivers in the at-risk groups before it was to be adopted. However, if we were to allow the insurance companies to simply charge those drivers that are at the highest risk of hurting themselves and others the actual costs to insure them adoption might come faster than if the overall pool of insured continues to subsidize those in the high risk groups. Regardless, the systems will start to help to reduce the easy to avoid accidents. The only question is will we as a driving community make the most of what these systems could offer.

Still image and video courtesy of Youtube.com and ils TVNews

Patrick Rall wrote on October 24, 2013 - 11:02am Permalink
These problems are solved very simply. Raise the driving age to 18 (if not 21) and require that everyone over the age of 55 take a simple driving competency test every two years until they turn 65 - at which point they are subject to a more comprehensive test that looks at their driving ability, their vision, their hearing, etc.
John Goreham wrote on October 24, 2013 - 12:45pm Permalink
Sounds like a pretty good outline to me. Simple except that the largest voting block in the US by far is the older driver group you wish to burden with a new test. They may continue to object to such an intrusion.