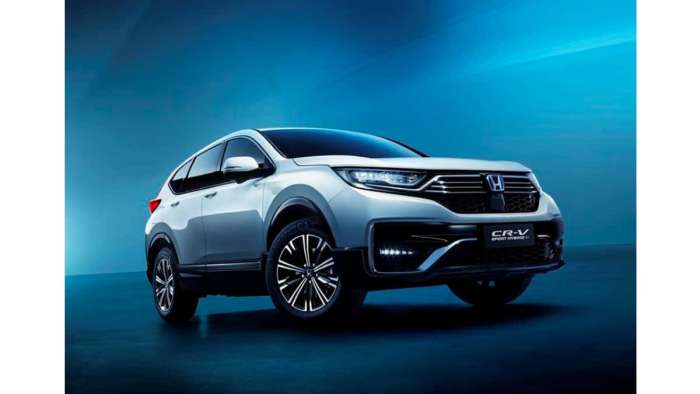 Honda revealed an all-new CR-V plug-in hybrid-electric (PHEV crossover this week. Here is how we think it would compare to the hot Toyota RAV4 Prime.
Advertisement

Honda revealed its new CR-V plug-in hybrid-electric (PHEV) crosover this week. The reveal took place at the 2020 Beijing Motor Show. While details from Honda are presently limited, we can make some assumptions and do a preliminary comparison to the hot 2021 Toyota RAV4 Prime PHEV.

Read Our Review Of the CR-V Hybrid

CR-V PHEV - What Honda Told Us
So far, Honda has not divulged the full specifications for the new CR-V PHEV. Nor has he company said when it will arrive in the U.S. (or if it will at all). However, Honda did say this: "The CR-V PHEV uses Honda’s original 2-motor hybrid system, SPORT HYBRID i-MMD, with further improved efficiency of the battery and converter system. This system realizes the “most EV-like feel” in virtually all areas for everyday driving, including driving performance, responsiveness and quietness.'

So, we can surmise that the CR-V PHEV will have a system similar to the 212 total hp system the Clarity PHEV now has. While the CR-V is a bit larger and a bit heavier, it is not meaningfully so. However, it would be a surprise if Honda did not enhance the power and perhaps also battery size for the CR-V.

Read Our Review of the Toyota RAV4 Prime

CR-V PHEV - Our Projections
We would expect the CR-V PHEV for the American market to have a total system power between 220 and 250 hp. Honda has no need to match the RAV4 Prime's 300 hp. Torque is what really matters, and the CR-V will have plenty from its electric motors.

We would expect a range between 40 and 50 miles on a fully-chaged battery, and that the battery and range would satisfy the requirement for the full EV federal income tax benefit of $7,500.

All-wheel drive is typically a requirement for crossovers, but Honda may opt to keep the PHEV front wheel drive and leave the AWD market to its current Hybrid trim. Hopefully not, and the AWD system would be part of the CR-V PHEV.

One thing we can almost be certain will not make an appearance in the Honda CR-V PHEV is a spare tire. If that is a priority for you, the Toyota RAV4 Prime may be your best bet.

Honda says that the CR-V PHEV will become the first Honda vehicle in China equipped with a plug-in hybrid system. This model is scheduled to go on sale in January 2021. Our bet is that the CR-V PHEV debuts in the U.S. in Q1 2021 and goes on sale mid-year.

Rick wrote on October 1, 2020 - 11:29pm Permalink
Honda can keep their vehicles. They refused to release the Crv Hybrid in Canada. I have owned 4 of them but this time I am buying Toyota.
Chris wrote on October 2, 2020 - 9:38am Permalink
"...the CR-V will planety from its electric motors." Maybe needs to be edited.
John Goreham wrote on October 2, 2020 - 1:03pm Permalink
Thanks, Chris! We made the correction after your comment. Much appreciated.
Daron wrote on October 2, 2020 - 4:39pm Permalink
What good is a vehicle that can only be driven less than 50 miles on a charge? I love Honda but would not purchase a Honda PHEV with the limited range. I have an 03 Accord with 390000 miles and would love to purchase a Honda PHEV in the next few years but cannot if that's the best they can offer.
Chris wrote on October 2, 2020 - 8:41pm Permalink
In my case, I have a 38 mile round trip commute every day. I owned a 2013 Chevrolet Volt for 6 years and could drive purely electrically for 9 months of year in suburban Detroit. I just bought a Clarity that has 10 more miles nominal range than the Volt did and it will suit me perfectly. For road trips I'm still driving a car that gets more than 40 mpg and that I can refill as any gasoline car. No hunting out quick charger stations.
Clarke wrote on October 2, 2020 - 10:02pm Permalink
Most people don’t drive more than 50 miles in a typical day. On the occasion that they do need to go farther, the gas engine kicks in. I have a Volt and drive about 2000 miles a month while burning only 1-2 gallons of gas. I will be first in line if this comes to the US
Mark wrote on October 2, 2020 - 11:24pm Permalink
PHEVs average about 40-50 miles of EV range. The Chrysler Pacifica gets 39 and the now discontinued Volt got 55. The whole point is that most people can take care of their daily driving with pure EV power. The average commute here in L.A. is 8miles and I know people commuting from SanClemente to Carlsbad with their Volt and never buying gas.
Robert Lehmert wrote on October 4, 2020 - 4:01pm Permalink
My last tank of gas -- all 7 gallons of it -- got my Clarity about 2,700 miles. The rest was electric. It depends on you're driving habits, but unless I'm doing more than a 50 mile trip (rare) it might as well be full EV. By the way, the Clarity gas engine gets around 40 mpg by itself.
John Leggett wrote on February 11, 2021 - 1:55pm Permalink
I have a Honda Clarity PHEV with 47 miles of range and it covers my daily driving needs over 95% of the time and the gas engine is there when it doesn't. It is logically the best option for optimizing charging range, weight, cost, etc. That being said, I also would love to have a longer charge range of 60 miles. That would cover about 98-99% of my daily driving needs.
Robinson Kidima wrote on March 31, 2021 - 3:49pm Permalink
What? Name me a PHEV with more than a 50 mile range?
Daron wrote on October 4, 2020 - 6:44pm Permalink
I guess I misunderstood...so the PHEV also runs on gas, I was thinking only electric since it is plugged in to charge, so that's a different story. I like the current Honda Accord and CRV hybrids, no plugging in and very good mileage. I would like to see an EV all electric Honda sooner than later. I drive way more than 50 miles round trip.