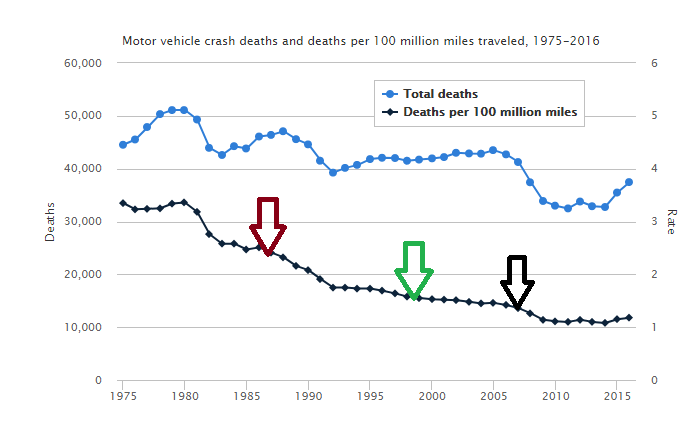 The media and advocacy groups want you to believe that distracted driving due to smartphones have caused a huge uptick in vehicle-related deaths. But have they?
Advertisement

Each year the U.S. Department of Transportation (DOT) releases its annual report summarizing the data related to vehicle-related deaths in America. Following the most recent few reports, the media and advocacy groups have made assumptions about the data that are not supported by the facts. One of these is that smartphones and distracted driving are causing vehicle-related deaths to increase in a meaningful way.

The problem is, if one looks closely at the data, and takes the time to gain an understanding of how vehicle deaths are reported, and what the metrics used to track vehicle deaths are, there is barely any recent increase in the motor vehicle death rate. Furthermore, when one looks into the data, which can take many hours of study, what becomes clear is that the past causes police assign to vehicle-related deaths are still there. Drunk drivers and “speeding” cause the majority of vehicle-related deaths now, as they have since data has been gathered. These causes are hard to argue against since police use measurements of blood alcohol content and physics to assign these causes. In addition to these well-known, well-documented and easy to understand causes, some new trends have developed in the past decade which don’t fit the narrative the media and safety groups want to have us believe.

First some facts. We have marked up the DOT graph above the story to show some “distraction” milestones. Since the introduction of the mobile phone in the late 1980s (red arrow), then the Blackberry in 1999 (green arrow), and then the big development of the Apple iPhone and subsequent Droids being released in 2007 (black arrow), the vehicle-related death rate has declined, not increased. And not by a little. By a lot. Since mobile phones became widespread, the driving death rate has been cut in half.

Measuring the vehicle-related deaths in American to ascertain some understanding of increases and decreases and the causes can be done in a few different ways. The first, and most meaningless, is the total number of deaths per year. This measurement is the one the media and advocacy groups want you to hear about because it can be spun to seem the scariest. Every death is a tragedy. This author, like most Americans, has lost friends and family in vehicle-related crashes. However, a more meaningful way to measure the deaths in America related to vehicles is the death rate per total miles driven. Over time, the number of miles driven by Americans increases and decreases as the economic and population situation changes.

When the number of deaths per mile driven is the metric, one can easily see that vehicle-related death rates have dropped dramatically since the 1970s. We are about a third as likely to die in a crash today, than in the past. It was even worse before the 1970s. For about 30 years, the rate at which people died in ways related to vehicles declined steadily and then leveled off about seven years ago. Since that time, it has been relatively steady. There is no sharp increase or decrease since about 2010.

More miles are driven now than in the past, and the overall deaths related to vehicles has increased in the past few years. Those years were economic recovery years and the number of miles driven increased. It should be no surprise to anyone who follows traffic safety that when more miles are driven, more deaths occur.

The Insurance Institute for Highway Safety makes looking at the data from DOT easy. Or as easy as viewing huge amounts of information can be. Looking at the information, some causes of vehicle-related deaths show clear increases in the past decade. Pedestrian deaths have increased by over 30% from 2009 through 2016 (the most recent year of available data). While it may seem obvious that drivers are running over more pedestrians while distracted, there may be facts that point to other causes. We do know that 45% of pedestrians over 16 years of age killed during evening hours by vehicles are drunk, having a blood-alcohol level over 0.08%. Fully a quarter of this group killed during daylight hours are drunk. Pointing the finger at texters behind the wheel is easy, but we do know from testing that other factors are at play.

Pointing the finger at texters behind the wheel is easy. We all see distracted drivers on any given day. It is extremely frustrating to see a person in another car drive past looking at a phone or with hands perched on the wheel texting away. We also know for sure that distracted drivers do cause deaths. Some distracted drivers in deadly crashes admit to the act. Clearly, efforts to keep drivers focused on the task at hand are important and should continue. However, alarmist stories that spin data to try to pin a cause on deaths that have declined since smartphones have been introduced don’t help, and will make skeptics the ally of those who lobby against such worthy actions.

Mark Brisson wrote on January 2, 2018 - 11:22am Permalink
Texting is not just a "teen" problem. There are millions of employees in company cars and fleet vehicles who try to "multi-task" behind the wheel. While many states seek to lower distracted driving by increasing penalties, fees and regulations, there is another option. There are anti-texting apps, like AT&T DriveMode which is FREE! One area that is rarely discussed is that each state has thousands of government vehicles that inspectors, regulators and the agricultural department use as fleet vehicles, but they do not have the technology to diminish distracted driving. I would love to see one state lead by example and use a program, like FleetMode, to block texts, redirect incoming phone calls, and impede all other apps in the State vehicles. If we want our state roads to be safer, let’s start by making our state vehicles safer.
John Goreham wrote on January 2, 2018 - 12:16pm Permalink
Well said, Mark!
John Dxxx wrote on January 4, 2018 - 12:36pm Permalink
You're largely correct. however there is a difference between what we know (and can prove) happened in a crash - such as a vehicle travelling too fast - and what we suspect (that the driver was using a phone, therefore failed to adjust speed due to distraction). It is irrefutable that road deaths have fallen, and that is largely due to safer vehicles and safer roads, much more than safer drivers. I speak as a former roads policing officer. Ask any officer and I'm sure their response will be similar.
John Goreham wrote on January 4, 2018 - 1:00pm Permalink
John, thank you very much for taking the time to add this comment. And thank you for your good work!