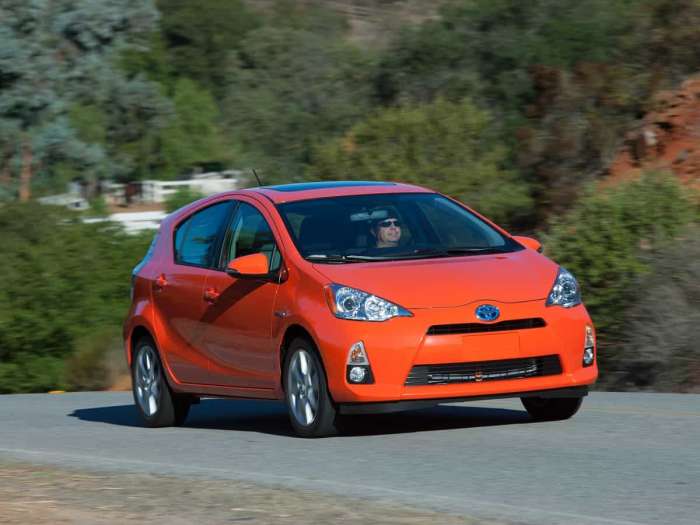 Green Cars Sell Fastest On Used Car Lots, But Which Is the Fastest-Selling Of All? Here's a Hint, It's Not A Tesla

A new study finds that green cars sell the quickest in the used market. Tesla has a car on the list, but it's not the one that sells quickest. See where your favorites rank.
Advertisement

Green cars sell the fastest on used car lots. A new study conducted by iSeeCars.com looked at more than 4 million used vehicle transactions for vehicles from one to three years old. The study found that the average time on the lot was 46.4 days. Among the top ten fastest-selling used vehicles, the top five were all green cars. 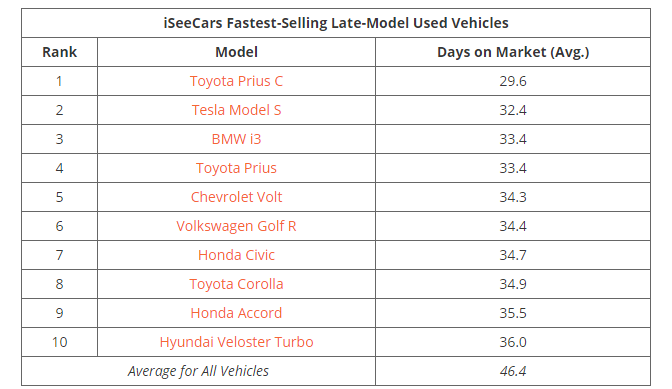 The Toyota Prius c is the quickest-selling of them all with an average time on dealer lots of just 29.6 days. That beats the number two quickest-selling vehicle, the Tesla Model S by a respectable 3 days, or 10%. The BMW i3, Toyota Prius, and Chevy Volt are the next three in order. As you can see from the chart above, the top five all have a pretty substantial difference in their times on used car dealer lots than do the average vehicle.

Torque News reached out to iSeeCars to ask about the Nissan Leaf, which was notably absent from the top 10 quickest-selling used cars. Julie Blackley did a custom query for us and says that the battery-electric Leaf spends an average of 39.4 days on the lot. Still much quicker-selling than the average used vehicle.

iSeeCars CO, Phong Ly, says that one reason green cars are quick sellers is their higher new car sticker price. “When buying a new car, hybrids on average are 20 percent more expensive than conventional gasoline-fuel cars so buying them used is an effective way to offset that added cost,” said Ly. “The performance of hybrid and electric cars, especially the Prius, has helped consumers abandon their initial concerns about battery life, and this perception change has contributed to the rising popularity of these vehicles.” 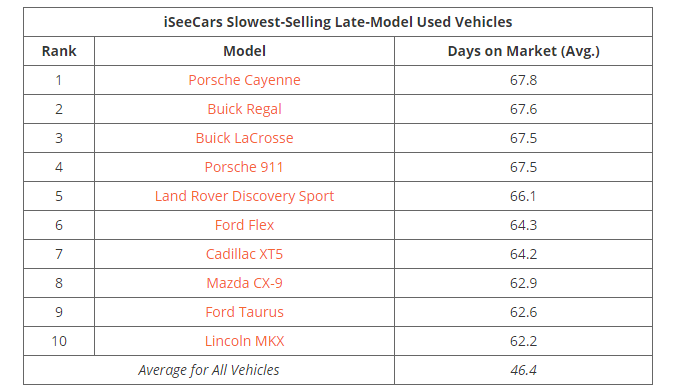 The Porche Cayenne has the dubious distinction of the vehicle that takes the longest to sell. Rather than an indictment of the Porche's quality or desirability, Ly sees another reason for the Cayenne's slow used car sales rate. “A late-model used Cayenne is one of the most expensive used SUVs on the market with a price of $61,136, and a used 911 is the most expensive vehicle among those we analyzed at $122,124,” said Ly. “These are very high price points for used car shoppers, which could explain why dealers struggle to move them off the lot.”

Pickup trucks tend to take the longest on average to sell compared to other vehicle types with an average number of days on the lot of above 50. The Honda Ridgeline bucks that trend. It spends an average of 39.4 days on the lot.