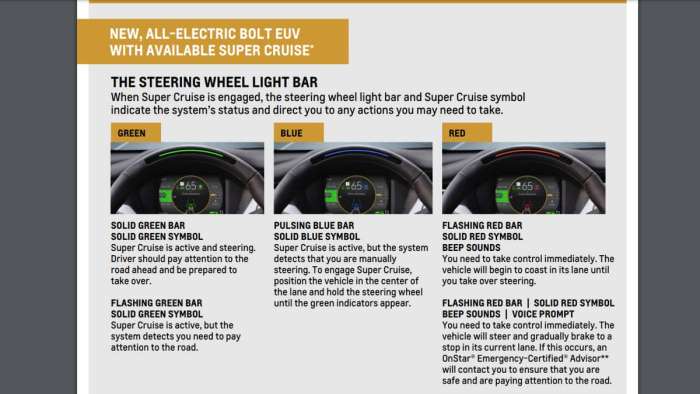 We tested the new 2022 Chevrolet Bolt EUV with Super Cruise and found that it takes this already great EV crossover to another level. Here’s how.
Advertisement

General Motors’ all-electric future is hitting its stride with the updated-for-2022 Bolt battery electric vehicle and slightly larger Bolt EUV (Electric Utility Vehicle). This pair is poised to make a strong market penetration moving forward as EV adoption continues to ramp up. One way GM is separating itself from the pack of new EVs being introduced is with meaningful, helpful, and modern technology.

GM’s Super Cruise - An Important Step Forward
There are many elements of the new 2022 Chevy Bolt EUV that impress us. At the top of that list is Super Cruise. We have all become familiar with driver-assist technology. Most drivers have tried adaptive cruise control that will follow the vehicle ahead of you as it speeds up and slows down. Somewhat fewer have tried lane-tracing technology that helps your vehicle to remain in its lane while on the highway.

Super Cruise includes these driver assist technology features but elevates them. On divided highways, one can now engage Supercruise and the vehicle will maintain its lane, steer, and slow down and speed up without the driver needing to take action. Hold your emotions in check for just a moment and let us explain how it works in practice.

GM Super Cruise- Real World Performance Quick Summary
We tested the new Bolt EUV on a trip from downtown Boston to the Mt. Washington, New Hampshire region. Over a three-hour journey, we employed every new and existing GM driver assist technology the vehicle offers. The quick conclusion is that GM has created an almost perfect suite of helpful technologies for drivers to enjoy. They also all have an off button.

GM’s Super Cruise - How You Use It - How It Operates
Supercruise employs a variety of sensors to see the road on which you travel and then compare what it sees to a precise map of that roadway. In addition, real-time updates are factored in from departments of transportation on all the roadways on which Super Cruise is enabled.

GM has mapped hundreds of thousands of miles of divided highway roadways to make Super Cruise work where it makes the most sense. We used it on interstate 93 North heading out of Boston, up through the inner and outer ‘Burbs of Boston, into Southern New Hampshire’s suburbs, and then into rural New Hampshire. In every sort of traffic condition we encountered it was flawless.

Super Cruise - Lane Keeping
Let’s start with lane-keeping. GM’s Super Cruise is absolutely spot-on. The vehicle remains in the center of the lane at all times and it never (ever) sways back and forth inside the lane. Some new vehicles we test from major brands still act like a bowling ball bouncing from one gutter bumper to the next. Not GM’s. Super Cruise puts you in the middle of your lane and it doesn’t do goofy things to keep you there. It does not feel robotic at all.

As the road turns, so too does your Bolt EUV. The Bolt remains steady and smooth as the road turns in wide sweepers, or turns relatively sharply (for a highway). You need not steer. The car steers for you.

If you wish to steer, and we will give some examples of why you might in a moment, you can. The car does not fight you. The wheel simply obeys you. You can take control at any time and the transition is seamless.

Bolt EUV Super Cruise - Lane Changes
To change lanes, one simply signals and then turns into the lane. Once you are centered, the Supercruise system signals it is ready to again take control if you wish it to and it will begin steering again if you let it. The car will not change lanes for you.

Super Cruise - What It Does Not Do
Super Cruise does not follow a navigation set point. In other words, you don’t set it for a distant destination and let it then drive you all the way there. No product from any manufacturer does that, nor are any close to that level of technology today. Rather, the Super Cruise system fits its name perfectly. It is like super cruise control. GM isn’t trying to pretend this is a self-driving system, because it is not.

Besides not changing lanes on its own, the Bolt EUV’s Super Cruise system will not steer within a lane to avoid a whopper of a pothole. Instead, it will drive right over it. We learned this quickly. So, when a pothole appears ahead, you simply steer around it within your lane, or if need be, out of your lane. It’s simple and intuitive after you have driven over the first one.

Super Cruise in the Bolt EUV is also not an emergency accident avoidance technology. Many manufacturers have prototype systems that will do exactly that. We suspect GM has as well. However, this is not like Toyota’s Guardian system that will intervene to save your butt from an impending crash. That remains the sole responsibility of the occupant in the Bolt EUV’s driver’s seat. That said, like all vehicles, GM’s Super Cruise does have automatic emergency braking, it does have lane keep assist, and of course stability control, anti-lock brakes, and brake force distribution. Like all modern vehicles, GM’s Bolt EUV helps, but it is not going to start dodging orange construction barrels falling off of a DPW truck ahead of you.

Supercruise - Smooth and Silky
Adaptive cruise control comes in a wide range of sophistication. Some systems, even 2022 model year vehicles, will still abruptly jam on the brakes if a car cuts you off or changes into your lane close ahead of you. GM’s system will brake, but it doesn’t “freak out” like many systems we test.

Our latest test prior to the Bolt EUV was a car model from a different major brand that is a historic top-seller. During our test of the 2022 model year sedan, we experienced numerous false alarms. That other model saw ghosts everywhere. Even with the sensitivity of its driver-assist systems set to the minimum allowable, it was frankly a bummer. Not so GM’s Super Cruise. We had no false alarms from any of the driver-assist tech.

Super Cruise - Safety In Normal Use and In The Event of an Unresponsive Driver
GM works with the DPWs in the states in which its Supercruise is enabled. In areas where long-term construction is underway, the system is disabled. You get a “not mapped” alert if you try to turn it on. Also, in areas where a pop-up crew is working, mowing for example, the system alerts you and informs you to be extra cautious - but it does not necessarily disengage.

If you stop paying close attention to your “driving,” Super Cruise does shut off. It alerts you that it’s bailing out by giving you a red LED flash at the top of the steering wheel. It kicked me out twice for not paying close enough attention on the three-hour ride. I was guilty as charged.

It won’t quit on you if you check your rearview camera or if you look at the infotainment screen to see the map. Nor will it kick you out if you use the phone hands-free. Let’s call its intervention about perfect.

If you were to have a medical emergency or fall asleep, the system will do a series of things to assist you and save your life. First, you get audible and visual warnings to retake control. If you do not, the system will slow the vehicle to a full stop, put the flashers on, and OnStar will be notified. Then OnStar will try to contact you, and if they cannot will send first responders to help.

Super Cruise- Pricing and Availability
Supercruise is a $2,200 option on the Bolt EUV, but you don’t actually own it. GM says that a “Separate subscription purchase is required after the included new vehicle purchase subscription expires.” We will let you be the judge of whether paying for a subscription would work for you after having already paid $2,200.

The Bolt EUV has just started to be delivered to owners in the American market. Some of the first owners are reporting that although they wanted Supercruise it was not available at this time, but that they could accept a Bolt EUV without it right now. We will update the availability and pricing as more details become known.

Super Cruise - Our Conclusion
We give GM’s Super Cruise on the 2022 Bolt EUV two thumbs up. We found that it was helpful on a long trip, felt safe, and is seamless in its operation where it is enabled. The safety systems seem very intuitive and given how the system operates, we see little opportunity for misuse by knuckleheads. The biggest impression we came away with was that GM has thought this through and brought to market a fully-developed offering. Well done GM.

Frequently Asked Questions:
Is GM's Super Cruise a self-driving system?
- No, Super Cruise is a driver-assist technology that can help make driving easier in some situations.

What Does GM's Super Cruise Cost?
- Super Cruise is a $2,200 price adder to the 2022 Chevy Bolt EUV plus a subscription service fee applies after the initial trial period ends.

Can Super Cruise automatically change lanes?
- It depends on which vehicle you try. GM's Bolt EUV when equipped with Super Cruise does not offer automatic lane change capability.

Is Supercruise good?
- Based on our testing, Super Cruise is an excellent driver aid and one of the best systems of its type.