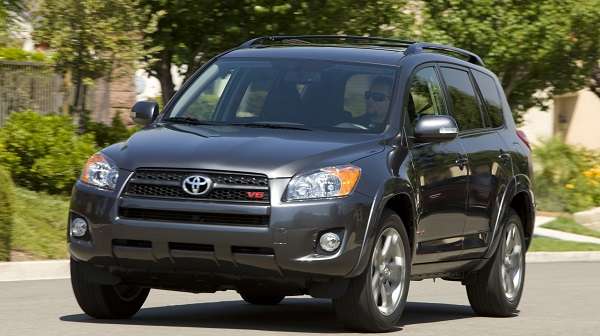 Toyota killed off its V6-equipped RAV4 crossover in 2013. Here are some great new crossovers that might help fill the void.
Advertisement

Toyota’s third generation RAV4 was a huge hit for the company. The RAV4 was affordable, sized to meet the needs of individuals, couple, and small families, and it was a fun all-around vehicle that could be used as a commuter car, family car, or adventure vehicle. Hidden in plain sight among the various options was a powerful and smooth V6 engine. Toyota’s 3.5-liter six-cylinder developed 270 hp and came with a five-speed automatic transmission. During its run the RAV4 V6 was one of Toyota’s fastest vehicles and was much loved by fans.
- Background: Why the V6 Toyota RAV4 is never coming back.

RAV4 V6 Never Coming Back
But now it’s gone and it is never coming back. The new generation RAV4 is better than the outgoing in almost every important way, except that it has no up-powered V6 engine option for those that want the added power for general driving pleasure or towing. To help shoppers find a new vehicle to replace the RAV4 V6 we developed this list of four affordable crossovers the same size as the RAV4 we think drivers may want to consider.

Subaru Forester XT
The Subaru Forester is our suggestion for those shoppers who primarily enjoyed the RAV4 V6 as a performance vehicle. The Forester uses a proven turbocharged four-cylinder engine that develops 250 hp, but more importantly, great low-end torque as well. The Forester XT has similar straight-line acceleration as the RAV4V6 did, but drivers will find that it is a bit sportier overall. There is one major difference between the RAV4 V6 and the new Forester XT and that is the transmissions. The Forester uses a constantly variable transmission (CVT) rather than a geared transmission like the old RAV4 V6 did. Take it from the owner of both a Toyota crossover with the same transmission as the old RAV4 V6 had and a Forester with a CVT, it is only weird at first. Within days you will come to love the smooth power delivery and better fuel economy of a CVT. The Forester is a Top Safety Pick+ and it gets 25 MPG combined compared to the RAV4 V6’s 22 MPG combined. However, the Forester XT takes premium fuel, one drawback from an otherwise very economical vehicle. (More on page 2)

Ford Escape
You may not like the Escape for its brand name, or its legacy of quality issues, but the Ford Escape does have multiple powerful engines from which to choose. Like the Subaru, the Escape offers a turbocharged four cylinder with ample power, and also a slightly smaller turbo we loved. If the CVT or premium fuel requirements of the Forester turned you off, you will be happy to hear the Escape uses a geared transmission and regular fuel. The Escape with the 2.0-liter turbocharged engine has similar performance to the RAV4 V6 and it earns a 23 MPG combined rating from the EPA. Unlike the Forester XT, the Escape does not earn top safety scores from IIHS.

RAV4 Hybrid AWD
Are you a fan of Toyota and wish there was a more powerful RAV4 for you to try? Good news! The RAV4 Hybrid AWD is more powerful. The RAV4 Hybrid has a total system power of 194hp and its electric motors allow it to generate torque at low RPMs. We have tested the RAV Hybrid and loved it. We will warn you, this is a high-tech, modern crossover. Who might want to consider it? Those who are tech-savvy, like a strong engine from a stop, and want to get 32 MPG Combined on regular unleaded fuel.

Honda CR-V
The Honda CR-V has an all-new drivetrain for 2017 and it is a gem. The new 1.5-liter turbocharged engine in the Honda CR-V has 190 hp and feels strong off the line. In normal driving, it never felt underpowered in our tests. It does use a CVT, but the times they are a changin’ and we hope our readers will take our word for it that after some time these transmissions feel better than geared automatics, not in any way worse.

The CR-V AWD earns a solid 29 MPG combined, and an amazing 33 MPG highway using regular unleaded gas. It is a Top Safety Pick+ rated vehicle (with the 1.5-liter engine trim) and in our testing was the best-handling affordable crossover we have ever tested. Those who like decent power around town and value highway fuel economy will find the CR-V fits the bill.

Elon Musk Says Tesla To Offer Car Insurance in Texas Next Month, But These Challenges Exist
Tesla Co-Found Plans To Build a Battery Factory and Shift The Industry
END_OF_DOCUMENT_TOKEN_TO_BE_REPLACED