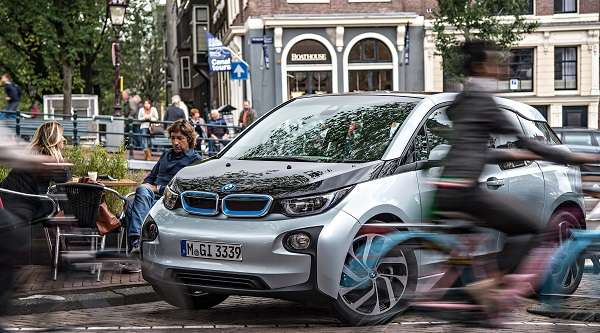 Reports of real-life accidents being avoided by BMW i3 owners are highlighting just how valuable such a system can be.
Advertisement

BMW i3 owners are openly praising the car’s forward crash prevention system (FCP). The i3 has full autobrake, which is a type of system that can detect an imminent forward collision, and then take action to mitigate the risks. Torque News has been reporting on FCP since its introduction in the US market. Our latest story was inspired by an owner’s post on the Facebook BMW i3 Club.

BMW’s i3 Autobrake Saves the Day
In his post today Marcel wrote “I just was driving on the highway with the cruise control on and a bit distracted (embarrassed). Suddenly, a loud beep and shock put me back in reality. The traffic in front of me made an emergency stop, and the i3 saved me from a collision. Great stuff!” In this case, a rear-end collision was avoided, but had Marcel been in a Tesla Model S, he would have had a bad day.

Marcel is not the only owner reporting good results. Christopher also reports his experience with the i3, saying, ”It saved my bacon the other day when a car lurched out into a too-small gap in traffic right in front of me – even though I saw it happen, the system beeped and braked before I could even react.”

Forward Crash Prevention Now Becoming More Common
Autobrake is certainly not unique to the BMW i3. The system is available on many cars, and the affordable Subaru Outback is considered to have one of the best systems in the world. However, FCP is relatively uncommon in premium electric vehicles (EVs). In the US, the Cadillac ELR, the Tesla Model S and the BMW i3 are the only premium EVs for sale. Cadillac’s ELR, while a wonderful vehicle, is so overpriced it is barely selling. That leaves the Tesla and BMW, and the Tesla is not offered with forward crash prevention.

Most green cars do have the system. Heather, a top contributor at the i3 Club reports, “My PIP (Plug-in Prius) had a crash warning system. It only went off once in stop and go traffic. I was briefly distracted; the car freaked out and I was able to avoid a fender bender. I was not in cruise control and not intentionally doing something else. It was an excellent feature that saved me from a small crash at probably 25-30 mph.”

Insurance Institute For Highway Safety Requirements
In order for a vehicle in the US market to earn the highest safety rating, the IIHS Top Safety Pick Plus, it must have some form of forward crash prevention. Recently, in its update on the technology David Zuby, the executive vice president and chief research officer at IIHS said, “We are already seeing improvements from automakers since the initial launch of our ratings last September. BMW and Lexus, for example, have added more braking capability to their systems, which has paid off in higher ratings."

The arguments against FCP are starting to grow a little outdated. “Just pay attention” seems logical at first, but as Christopher’s example above proves, the systems do more than step in when inattentive drivers are busy with other things in the car. Be honest. Would you rather that the vehicle behind you in stop and go highway traffic had the system or not?

Related Stories:
Lexus IS outscores rivals on IIHS Front Crash Prevention test
Aluminum trucks like the Ford F-150 and forward crash prevention systems may save your life
Deaths in Tesla Model S crash might have been prevented by common safety system