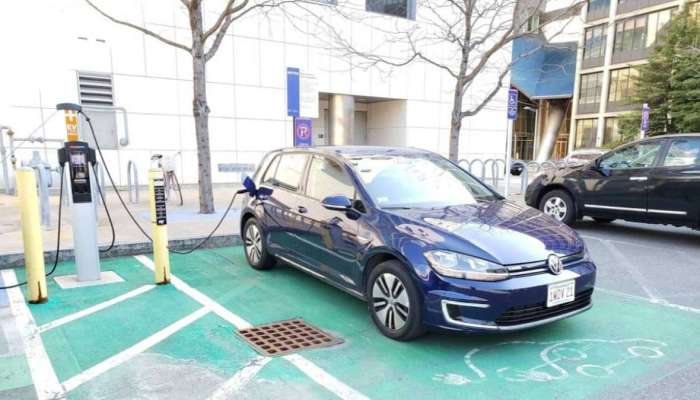 The largest automaker on the planet has one of the smallest green footprints in New England. We spot an e-Golf electric vehicle.
Advertisement

This week, on the campus of MIT in Cambridge, Massachusetts, I saw for the first time, a Volkswagen e-Golf in person. I am the New England electric vehicle reporter for Torque News. I have been for most of the past decade. It seems amazing that this is the very first time I have ever seen in person any electrified vehicle from VW. 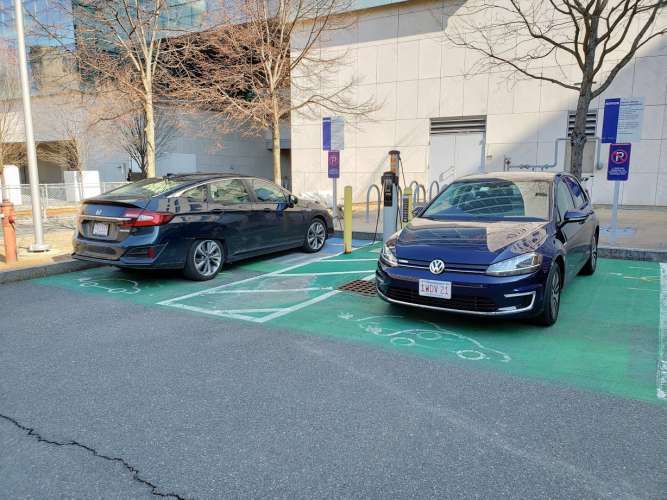 Seeking EV Images
For one, I take images of EVs on a daily basis for stories. I snap them even if I don't yet have a topic in mind. That is how I get most of my images of Tesla Models 3 cars, Honda Clarity PHEVs, Leafs, Outlander PHEVs, Niro EVs, and Bolts. Another reason it is unusual for me to not have seen an e-Golf is that I attend about 20 events each year where automakers highlight electric vehicles. Monthly New England Motor Press Association meetings, auto shows, manufacturer local launches, kick-off events and the like. As well as a 2-day track event in New York as a member of the New-York based International Motor Press Association.

Related Story: Here's the Most Biased Honda Clarity PHEV Story You Will Read

Volkswagen offers great support to these events and the company has one of the best PR reps in the business (initials WG). I'm also the guy that the local press fleet thinks of when they have an EV to provide for a full review. Some writers have other focus vehicles such as trucks or performance cars and would rather not have an EV. My focus is on mainstream vehicles and EVs and I ask for them because I supply reviews and content to vehicle sales sites. The e-Golf fits into both the green vehicle and mainstream vehicle segments.

Regular EV Testing
I have tested many EVs (most really), including ones only for sale in California. Even tiny-volume EVs like the i8 from BMW (tested twice and driven two additional times). I've tested the Jaguar iPace twice. The Kia Soul EV twice. I drove the tiny-volume, limited market Honda Fit EV. Yet, I can not recall ever being in any place where an e-Golf was shown, highlighted, or simply happened to drive by. 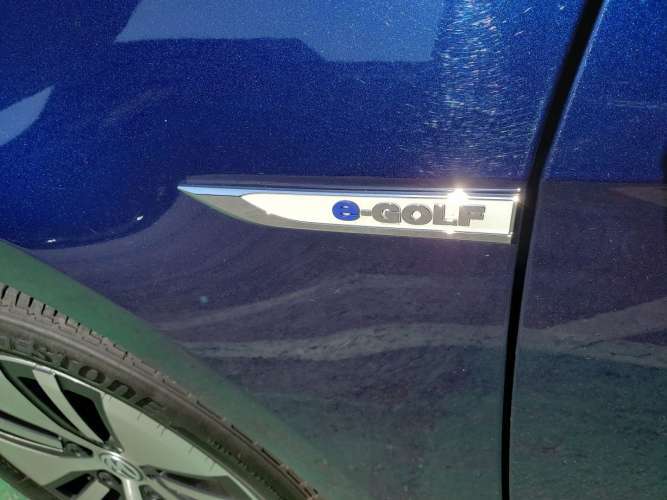 VW Has A Small EV Footprint
In 2019, there were about 330,000 electric vehicles of all types (not just battery-electric) sold in the United States' vehicle market. We find it ironic that the world's largest automaker, Volkswagen, supplied less than 5,000 of those vehicles. It isn't as if VW had just introduced the e-Golf. It arrived in October of 2014. It has been around for five and a half years.

The possibility exists that I was at an event where the e-Golf was on hand. Perhaps at an auto show, or at one of the annual meetings of one of the press associations I attended. But I can't recall ever having seen one, or ever having been made aware it was there. Honda, Toyota, and other green vehicle companies often reach out to me in advance of such events to let me know a green vehicle is available, since I report on them so frequently. Heck, Tesla even reached out to me to offer a short (30-minute) drive in its S, X, and 3. That is unusual for Tesla, who keeps a very low profile among the press.

I'm a fan of the company. VW makes some of the vehicles I personally prefer, including the Golf, GTI, both Tiguans, and the Jetta. I particularly like the Jetta and Golf wagon variants. Here, and at other publications, I have often reviewed VW products in a positive light (which they deserve).

Rooting For VW
I'm rooting for VW to expand its footprint in America. The company has recently ended the sale of some iconic cars in the American market. As a fan of EVs and as a fan of VW, I hope that the company soon has a leading role in the green vehicle market here. The opportunity could not be better. Toyota, GM, Nissan, Honda, Kia, and Hyundai presently "lead" in the U.S. market among mainstream EV sales, and none of them are maintaining a 2,000 unit per month sales rate. Tesla's Model 3 leads overall with just a 14K per month average in a market that sees forty-thousand crossovers per month from a long list of automakers on a regular basis.

What's Your Take?
How can a guy who has driven a Fisker Karma not have ever seen an e-Golf? Do you see e-Golfs in your neighborhood? Would you like to see the world's largest automaker take the lead in green vehicle sales? Tell us your thoughts and observations in the comments below.

Don wrote on February 24, 2020 - 2:03pm Permalink
I'm sure you've seen one or two in the last few years, but they don't stand out so there's no reason that you'd notice. Some manufacturers have tried to make their EVs look unique but VW has done the opposite. This will change when the IDs start showing up.
John Goreham wrote on February 24, 2020 - 2:21pm Permalink
I think you may be right. In my state, many (most?) EVs get the special EV plate though, making them easy to spot. Front and rear.
giuseppe pistone wrote on March 29, 2020 - 6:58pm Permalink
la E-GOLF e una delle electric car piu piacevoli da guidare e da vivere ciao dalla toscana( italia)
Clark B wrote on April 14, 2020 - 9:22pm Permalink
I saw one at a car wash in Phoenix last month. I talked to the lady who was driving it and she said: "it's a nice car for driving around town." I'm guessing it's not her only vehicle. I wish I could afford to spend $30k on a car for "around town."