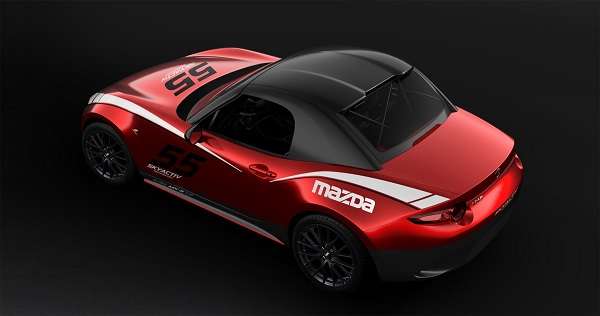 Mazda has a sweet factory hardtop for your ND Miata that it won't let you buy.
Advertisement

The 2016 and 2017 Mazda Miata soft-top convertibles are fantastic cars and the tops, made by Haartz Corp are superb. Still, many owners of Miatas like to have an optional, removable hard-top for certain situations. Winter, long road trips in questionable weather, city owners worried about vandalism, and the like. Mazda has not offered a factory-direct option for the new ND Miata now on sale as the 2016 model year, and recently introduced as the 2017 - until now.

Mazda just released the prices and images of the sweetest factory-direct hardtop we have seen. The problem is, Mazda won't sell it to you. That may not be a problem since the price is a whopping $4,420!

Mazda developed this option for its MX-5 Global Cup racecar owners. Some tracks and events require that vehicles have a roof, and thus, Mazda has stepped up to help owners of racing Miatas comply with the regulations.

David Cook, business development manager, Mazda Motorsports, explained the new top, saying, "While our first year was spent concentrating on the successful launch of the MX-5 Cup car in our Battery Tender Global Mazda MX-5 Cup presented by BFGoodrich Tires, we knew that was just one arena for customers. Now with an available hardtop, Mazda racers can compete in SCCA and NASA Club Racing and in the Pirelli World Challenge TCA class."

Those looking for a hardtop ND Miata are left with a couple choices. First, the Miata RF, which has a gorgeous body and retractable hardtop. Second, the aftermarket, which has options starting around $180 for new tops.