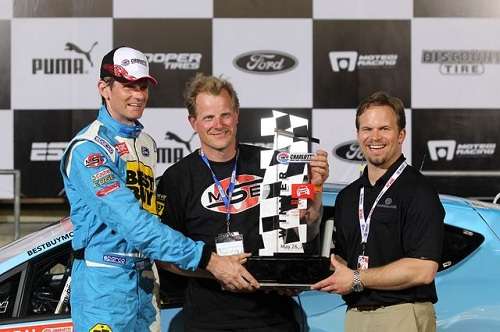 Grönholm and teammate Foust finish one two while Pastrana in the new Dodge Dart has a good outing.
Advertisement

Rally racing in America is analogous to soccer in America. World-wide it is huge and people all over the world flock to the events. Here in the US we have Football. That role is played by NASCAR in this comparison. In order to bring some excitement to the sport of rally racing, indoor competitions, and competitions on small infield courses were developed. This has breathed life into the sport here in the US and many of the racers are quickly gaining some notoriety.

The Global Rallycross Championship, or GRC, is the US version of the World Rally Championship, or WRC. The events are different, and the courses much smaller, but the GRC is made to be fan and TV friendly. The GRC website sums it up perfectly saying “The Global Rallycross Championship combines the best aspects of circuit racing, off-road racing and rally competition to deliver intense action in a fan-friendly environment. Action sport stars including Travis Pastrana and Brian Deegan have described the sport as “motocross – with a roll cage.”

GRC Overview
The championship consists of 6 races, the first of which was held yesterday at Charlotte Motor speedway. The cars are sub-compact rockets based closely on the manufacturer’s street versions. However, they are stripped and rebuilt completely. Power is in the neighborhood of 600HP and the cars are all-wheel-drive of course. 0-60 times of 2 seconds are not uncommon. Unlike auto racing of every other type where the cars are designed to create down-force to stick them to the ground, all GRC races have jumps. Therefore the cars need to be able to fly as well as stick to the ground. The jumps are not small, they are about 70 feet and they usually jump over the other race cars passing under them. The sport is in its third year. Despite the obvious contrasts that can easily be drawn between GRC and NASCAR races, the GRC events are actually all scheduled as companion events to Sprint Cup events.

Dramatic First Race
This past weekend the overall winner was rally legend Marcus Grönholm. Coming in second was perhaps today’s overall car control champion, Tanner Foust. Both are teammates driving the Ford Fiesta. Third place was taken by Stephan Verdier in a Hyundai. One of the more exciting parts of the race was the Finnish rally legend Tommy Heikkenen crashing into the Subaru WRX entry driven by Dave Mirra. Heikkenen was black flagged for the move and Mirra awarded eighth. NASCAR fans refer to this kind of action as as “If you ain’t rubbin, you ain’t racin’.” Pastrana's Dodge Dart finished mid-pack. Not bad for a brand new car in a new race series.

The next event is June 9th at Texas Motor Speedway followed by a two day event in LA as part of the X-games. For more information on GRC click here.