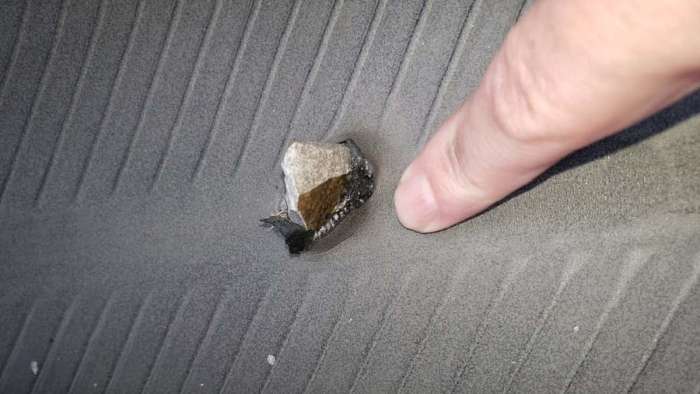 Did a Meteorite Puncture This Mazda CX-5's Tire?

One of our vehicles suffers an unusual tire puncture. Could the object have come from space?
Advertisement

Since we test vehicles, tires, and car accessories on a regular basis, we are not usually surprised by a tire puncture. However, we recently had a tire pierced by what we can only surmise was a meteorite. The image above shows the result of the object's unlikely penetration through the tire. According to Space.com, thousands of meteorites strike Earth each year. A huge meteorite struck a car in New York in 1992, passing through the trunk. Coincidental to this flat tire, many people in New England reported seeing a meteor. 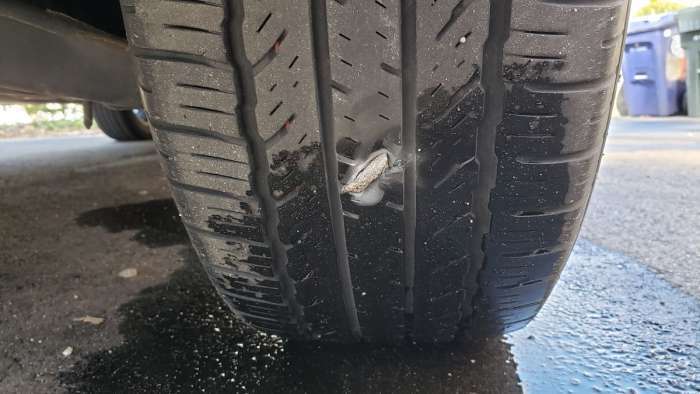 The object first appeared to be a large chunk of metal. The second image shows the look from the outside of the tire. We applied a strong magnet to the object and found it was non-ferrous. It still may have been stainless steel, but once the tire was removed from the rim, it was apparent the object was a stone of some type. 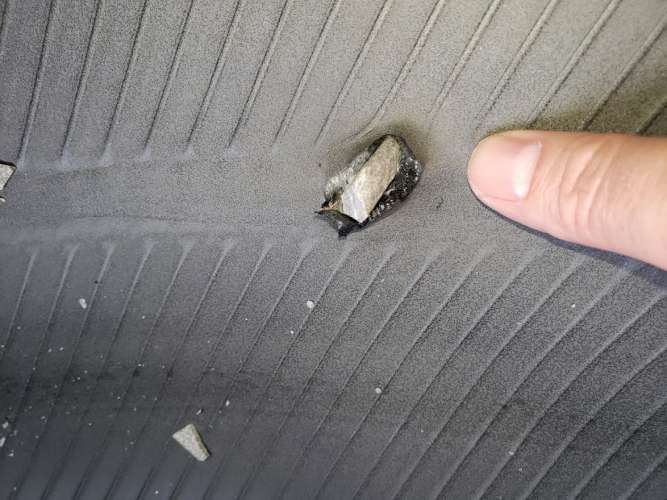 Interestingly, there appeared to be a bit of tire melting around the perimeter of the stone. Hmm. Hot stones capable of going through a tire are unusual on the surfaces we drive on. The tire puncture happened on Metro Boston roads, not off-road, and the driver didn't pass through any paving zones or unusual road construction.

If a stone can cut through a tire, we would assume this would be a common occurrence. Our tire shop tells us that it is not. They have removed objects of every type from tires including crescent wrenches. However, the experienced tire tech tells us he had not before seen a stone go through a tire and then remain in place. This one actually held enough air for the car to be driven about ten miles before it went to zero pressure. Did the melting help seal the air in?

Related Story: Here’s Why Your Tire Cannot Be Repaired

The tire that was punctured was a Toyo A36 grand touring tire on a Mazda CX-5. It was only partly worn with approximately 34,000 miles on it. The other three were in great shape. These tires were not degraded or mistreated.

What's your take on the object? An uncommon, but possible stone impact that happened to drive the stone into the tire, but not then be flung out? And what about the melting we observed? If you have a guess better than a meteorite strike, we are happy to entertain your speculation in the comments section below.

Darryl Pitt wrote on April 6, 2021 - 10:06am Permalink
I am the curator of the Macovich Collection of Meteorites; this is not a meteorite. Might I suggest the invocation of Occam's Razor moving forward: "Look for the simplest explanation to explain the phenomenon." It's a terrestrial rock.
John Goreham wrote on April 6, 2021 - 2:34pm Permalink
Spoil sport :) Thanks Darryl.
Samuel wrote on June 14, 2021 - 10:12pm Permalink
First: TOYO Tires are crap on the CX5. 300 Rating OEM Tires. Replace with continental yokohama kumho hankook
Scott wrote on May 18, 2022 - 12:13pm Permalink
If you think about it, the angle to impact the center tread would be impossible as meteorites of course come down from the sky. How would it have not hit the car first?