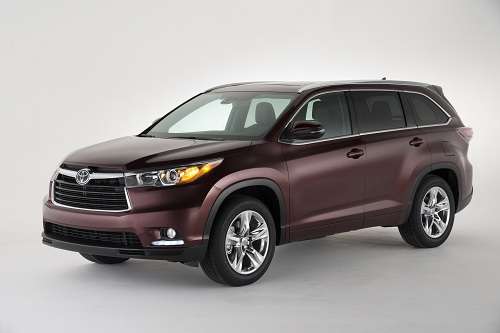 The 2014 Toyota Highlander is all-new and was just revealed. The car hits all the targets and has one interesting feature we didn't see coming that will be great for buyers with bigger families.
Advertisement

One week ago Torque News previewed the all-new 2014 Toyota Highlander. Did you trust our predictions? You should have because they were 100% accurate. There are a few more interesting details, which were revealed today at the Jacob Javits Convention Center in New York City. Starting wih the Highlander can now be configured as an eight passenger mid-size sport ‘ute as opposed to the previous seven passenger layout. This is due to a 4.5 inch wider rear seat that can now host three smallish humans, or two biggish humans. Warning to parents; As an owner of a 3-row Highlander I would advise you that if you strap 3 monkeys in back there you better have a steady supply of peanuts to toss rearward or they will drive you bananas.

Speaking live this morning, Toyota Motor Sales USA’s president Jim Lentz started off the Highlander overview by telling us what we told him. Apparently, Toyota asked its current Highlander owners what they wanted in a new vehicle. Their reply was that they thought the current vehicle was just the right size. Thank goodness Toyota listened and didn’t super-size this great package. Customers also said they wanted a “dynamic styling and a premium interior.” Toyota has delivered on that request without scaring anyone by making the changes dramatic. This isn’t Hyundai after all. The feedback also requested a balance of comfort and utility that was fun to drive. Although we have not driven the car yet (nobody has), the 2014 RAV-4 was recently revealed and it is indeed a more fun vehicle to chart a course to the outlet mall in. We have no doubts that Toyota will have worked the same magic on the Highlander.

2014 Toyota Highlander Looks
The new look is very Highlander. This one looks like the last one like Mary Kate looks like Ashley. The popsicle has melted a bit and the vehicle is a bit more streamlined. As we predicted, the roof rails are recessed now, as they are in almost every vehicle in this segment. That helps with the looks, improves fuel efficiency and they work almost as well. The moonroof has doubled its size to now cover the second row. Of course, there is a power sliding shade to keep occupants from roasting on the way to little league.

Up front, Toyota has integrated LED daytime running lights and the headlights in general look better. They had become too square and oddly bulbous. Along the sides the beltline looks higher and the greenhouse a bit smaller, or more sleek. Side views highlight the new 19” chrome wheels. Heading to the rear side view Toyota has added the world’s smallest “Hoffmeister kink.” That being the ubiquitous small upturn at the bottom of the C-pillar. The rear is rounder now and unfortunately, the Highlander still has the rear wiper hanging off the bottom of the glass. Toyota apparently will not let the cool hidden-wiper design from the RX350 go to other vehicles quite yet. So parents, check that it is still there after you leave the car wash.

2014 Toyota Highlander Interior and Safety Features
The dash of 2014 Toyota Highlander is not groundbreaking, but it is fresh. The defining change is a cell phone cave under the HVAC controls. Smart packaging for sure. The center infotainment screen is an 8” unit with touch screen operation. The car you buy will likely be equipped with NAV and optional Entune and Safety Connect, or you might find one of the rare budget-configured Highlanders without these options. Soft-touch materials, like those just introduced on the new 2014 RAV-4 are where your skin contacts the car. For example, on the steering wheel. The front seats can now be ventilated and the first two rows can have heated bun warmers. In between the front two seats is a bottom-less pit of a center console that can swallow up to 25 liters of stuff. We are not certain, but we think that is more than the carry-one allowance on domestic flights.

The rear tailgate is now power and has the ability to be customized for lift height. This is so you don’t open it in the garage and then back out- catching it on the top of the garage door and causing much misery. Looking into that maw of a cargo area, the space is larger due to a switch to a double wishbone suspension that disappears the shock towers that used to occupy cargo space. Seating is now your choice of seven or eight passenger. The second row is where the choice is made. One can either select two captain’s chairs, or go with the three across bench. That choice will have a lot to do with the head-count out the door each morning. Two and through for the family size? Go with the captain’s chairs. Two and still trying or three, better get the bench.

All of a sudden the Highlander has all of the safety features. Rear-cameras are on all ‘utes now, but the Highlander plays catch up with a blind-spot alert, rear cross-traffic alert, pre-collision system with adaptive cruise control and auto high beams. There isn’t anything missing a family would expect in a high end family sport ‘ute.

2014 Toyota Highlander Powertrains
The 2.7 liter four-cylinder and the 3.5 liter 6-cylinder both carry forward. However, the V6 can now come with a 6-speed transmission which will help with fuel efficiency. Thank you, thank you, thank you, Toyota for not succumbing to the imaginary 0.1 mpg improvement a CVT would have brought. This alone may be a very good reason to walk past the 2013 Nissan Pathfinder and on to the Highlander during shopping. Both front and all-wheel-drive will be offered. The AWD versions move to Toyota’s new Torque Control AWD recently first seen on the 2014 RAV-4.

The Toyota Highlander has been a perennial reliability winner and is currently Consumer Reports highest ranked mid-size sport utility vehicle. Owner confidence sells cars and keeps resale values high. Couple this amazing track record of reliability with the fact that now all Highlanders, even the hybrid, are made in Indiana by Americans and you have a family vehicle that is sure to continue to dominate the segment.