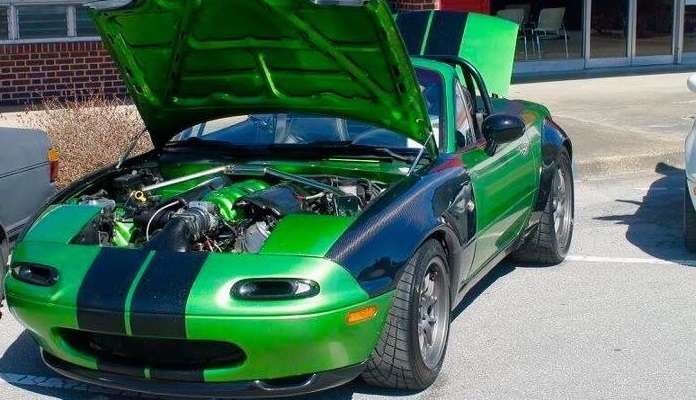 V8 Mazda Miata conversions are not new, but this Miata is a work of art.
Advertisement

James and Janna Weeks of Newport, NC own one of the most amazing Miatas ever constructed. The couple inherited the NA generation car bone stock from Janna’s mom. As a tribute to her, the couple have built this amazing Corvette-engine-powered car from the ground up. James and Janna were kind enough to share their story about the car they call Zoom with Torque News.

TN – Please tell us how this Miata modification project started.
JW – After Janna’s mom passed, we have worked to build it from the bone stock 1.6 it was to the monster it is today. It has been a memorial build to her. First Janna drove her bone stock for a while, and then I put in a 1.8l and turbocharged it while she was deployed in Afghanistan. Upon her return, we went about painting her. In December of 2015, the motor that is in it became available off another car we were building and I asked if she wanted to put it in her Miata, and thus the transformation began. We have had her on the street for about a year and put almost 5000 relatively trouble free miles on her.

TN - Who did this work on the car?
JW - We have done everything to this car: Paint, bodywork, electrical, drivetrain, interior, exterior…. absolutely everything done to this car has been done by us in our garage.

TN – We spotted the car at the Facebook site for National Speed, a company Torque News has come to respect greatly and that we follow closely. What is the association?
JW - We won some dyno pulls from National Speed at Cars and Coffee Wilmington one month and happily cashed them in. We know a few of the guys and they asked if they could take a few photos, we agreed.

TN – Can you tell us more about how the car started out?
JW - Zoom started out as a 1992 Mazda Miata. It would have been a “B” package for the year, containing all of the nice things. She was a 1.6l, 5speed car with power windows/defrost/power steering/ac/cruise control.

TN – What is the current drivetrain?
JW - Currently she has a 5.7l LS6 with head work, intake, and cam. T56 6speed transmission. Ford 8.8 rear end with 3.08 gears and 900hp axles with custom hubs. She also sports a nitrous bottle that we are still working out a few bugs on.

TN - How is the handling affected by the bigger engine up front?
JW - It really isn’t. The swap adds a total of around 300lb to the weight of the car (iron block 4-cyl to an aluminum block 8) and when properly mounted maintains an almost perfect weight distribution due to the bulk of the weight being in the transmission (the center of the car). Zoom weighs in at 2551 in full “show” dress and ¾ tank of gas. Weight distribution sits at 52/48, not far off from the stock of around 51/49.

TN - - How fast is Zoom?
JW - We have legally taken her up to 164mph in a half mile drag at a WannaGoFast event in New London NC. Zoom cranks out around 450hp all motor (which pulled a 156mph run without issue at the same event). She also sports a nitrous bottle that we are still working out a few bugs on.

TN - - What about braking?
JW - We are using Sport Brakes out of a 1995 M edition, nothing fancy, and she still stops great. You have to push a little harder at very high speeds, but for standard use, they work fine. We plan to eventually move up to a beefier system with our continuing modifications

TN - What do you like most about the car?
JW - It is literally the most fun car we have ever driven. All the fun of a light weight sports car with a huge bump in power. She is all around a great car and will do anything we ask with great results. We show, drag, auto-x, cruise, and we can generally do anything we want with her. We are looking forward to getting her on a road course sometime this year. She’s also been unbelievably reliable and if needed would do just fine as a daily driver.

TN - Do you have other unusual cars?
JW - We do. We have another LS Miata that is currently being built, a 302 MiataKart, as well as an LS swapped turbocharged RX7 FD that we are currently finishing from its latest modifications. You could say that stuffing big engines in small cars is a passion for us.

Torque News would like to thank the Weeks for sharing Zoom with us and our readers.

For Some Former Daimler Managers Daimler Is Authority, While Tesla Is Like a Startup
How Daimler Unintentionally Subsidizes Tesla Giga Berlin
END_OF_DOCUMENT_TOKEN_TO_BE_REPLACED