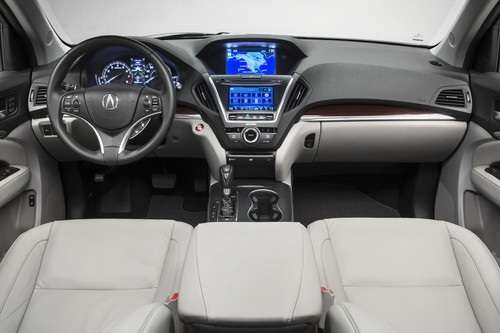 The MDX may not look very different on the outside, but it has significant changes under the skin buyers will appreciate.
Advertisement

The 2014 Acura MDX looks a lot like the 2013 MDX on the outside. However, under the skin a lot has changed, and for the better. The MDX is not a flashy car, but it is very capable. For this completely new vehicle Acura chose to give it substance rather than simply add some flashy bodywork. Many Acura owners will likely prefer that.

Acura stretched the wheelbase on the new MDX by a couple of inches to aid rear seat room. It also dropped 275 pounds by using more expensive high-tensile strength steel and other alloys in greater quantities than before. In its press release Acura made it clear this is a the quietest MDX ever.

2014 Acura MDX Looks and Style Changes
Up front the new headlights are the major change. They are now called Jewel Eye headlamps and feature LEDs. The rest of the front end is actually less dynamic in appearance than the outgoing 2013 and also less interesting than the prototype that had been making the rounds. The lower driving lights appear to be either missing or have been replaced by a row of LEDs. Along the side there are more distinct side contours. Acura calls the styling “Executive Aero Sculpture.” We would call it “The Ann Taylor Suit of Sport Utes.”

New Drivetrains For the 2014 Acura MDX
The MDX will have a new engine for 2014 displacing 3.5 liters instead of the current 3.7. The V6 with 290 horsepower will feature cylinder deactivation that will help the MDX achieve an EPA estimated 18 city/27 highway in AWD configuration. New for 2014 is a two-wheel drive version of this large sport utility vehicle. In that configuration, the mileage is higher at 20/28 mpg. Will customers opt to forego AWD in their sport ute to achieve higher mileage? Maybe in warmer climates, but we suspect that these 2WD models will not be delivered in any volume to colder regions.

2014 Acura MDX Interior and Safety
The interior is where all the real visible changes have been focused. The dash now has two separate very large screens in the center dash console. The top one is the Nav screen. Below it is a touch screen that takes the place of 32 buttons. That leaves just 9. Honda has been accused by many of the auto-reviewers who pay attention to interiors of splaying buttons across the dash in such numbers one writer called it “button-pox.” Adding a second screen is a solution to that, but does it make the car better, or do we now have two distracting bright screens to take our eyes from the road ahead?

The stereo is now more powerful and the vehicle can come with a real time traffic service. Some manufacturers are now moving to subscription free traffic, so this one should be pretty special if it costs money. Rear seat entertainment will now culminate in a 16.2 inch display screen for such things as video games. Like all cars in this class the Acura will feature a multi-angle rear camera, lane keeping assist, collision mitigation braking, and blind-spot information.
The 2014 Acura MDX will be on sale this summer.