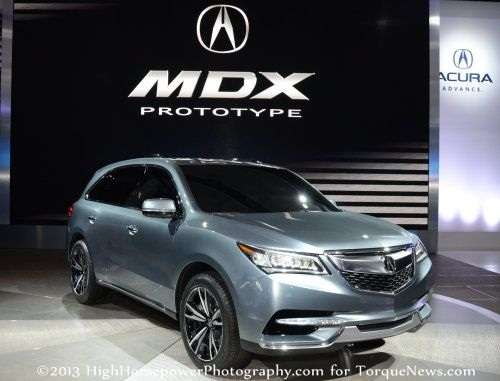 Tomorrow Acura shows the world its new 2014 MDX at the New York Auto Show. Here is what is to come.
Advertisement

Acura will unveil the all-new 2014 MDX seven passenger crossover tomorrow at the New York Auto Show. The MDX is Acura’s most important vehicle by far. Not only is the MDX Acura’s unit sales leader, it is also likely Honda/Acura’s most profitable single vehicle. The MDX is also Acura’s flagship car now that the RL, of which Acura sold 11 this past month, has faded into obscurity.

Acura recently updated the RDX and its sales leapt. Acura is hoping the new MDX will have the same effect. Sales of the MDX have dropped off. However, this may be due to a combination of limited inventory, the success of the RDX, and also customer’s awareness that a new MDX is coming.

The 2014 Acura MDX will feature both a new engine and also a new body. The platform is all new and is longer. This longer chassis will provide more second row legroom as well as easier access to the third row of seats. The longer wheelbase will also improve ride comfort, though the MDX was already excellent in that department. The new drivetrain will feature a new 3.5 liter, direct-injected gasoline engine. The engine will likely develop over 300 hp (the current model uses a 3.7 liter 300 hp engine). In addition to better performance, Acura has promised better fuel economy than the 18 mpg combined the present MDX is rated at. Acura has not announced a change to the 6 speed, paddle-shift automatic transmission, but one more forward gear would not be a surprise. A CVT transmission is also not out of the question, though since the MDX is marketed as a sporty crossover, this would be a surprise.

Acura points to the new Jewel Eye, LED headlamps as a styling point on the new 2014 MDX. Much of the exterior is very likely to be the same as the prototype vehicle shown in the photo that was on display earlier this year by Acura at the Detroit show. If so, customers will have a hard time identifying the new 2014 MDX compared to the outgoing design except by the headlights. Acura has taken its design down a notch since the “shield” styling was blamed for unacceptable TL sedan sales. The new RDX is so close in looks to the outgoing RDX even auto news outlets have confused photos of the two.

In a press release Acura made mention of a lot of the safety and driver aid related content the new MDX will have. We reviewed the list and nothing is missing and nothing is unique to the MDX. At this point, all luxury vehicles have blind spot this, lane assist that, and some kind of forward collision mitigation. Until the IIHS changes its view and determines that these systems actually prevent accidents it hurts our fingers to write about them.

Torque News will bring our readers more details on the 2014 MDX after the full specifications are released after the reveal tomorrow.