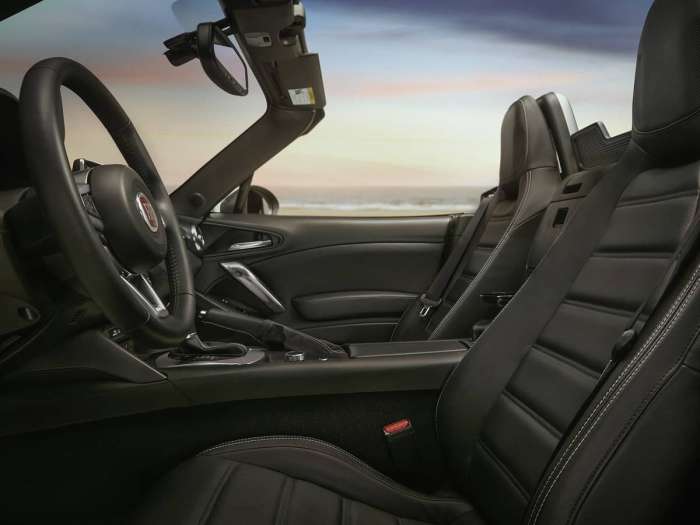 The 2019 Fiat Spider will have some changes. Here is what they will likely be.
Advertisement

The 2019 Fiat 124 Spider will have some changes coming. This according to an FCA US spokesperson Torque News communicated with on the subject. The changes will arrive in September and be announced in that month officially as well. Rather than be granted access to the information, but under an embargo to not disclose the info until it is announced by a formal press release, we declined the offer to hear them now. We think we have a pretty good idea what the changes will be based on our own research. Here's what we think is coming. Most of this is based on Mazda's official announcement regarding changes to its Miata.

2019 Fiat Spider Changes To Expect
Telescoping Steering Wheel
The Miata is getting a wheel that will telescope. Since the major components of the two cars are shared in this regard, we feel it is very likely that the new 2019 Fiat Spider will get a telescoping wheel. Why does it matter? Two reasons. First, it offers more adjustability in daily driving and that is always a good thing. Second, when driven on the track, most racers like to bring the wheel closer. They do this to enable more arm strength in the control of the wheel. A telescoping wheel allows that but keeps the legs in a comfortable position.

Infotainment Updates
Expect some minor improvements and updates to the way Fiat offers the infotainment in the 124 Spider. Mazda has made some tweaks and these are normal in any update to any vehicle. Expect to see more options pushed to lower trims.

New Paint Colors and Possibly a New Top Color
The maker of the premium top on the Spider, Haartz, will possibly offer a new color this fall. Mazda has added two new top colors, Cherry and Chocolate, in recent months. Haartz is a very flexible supplier with amazing capabilities. We would not be surprised if Fiat tapped into this resource to freshen up the 2019 colors a bit.

What Changes Not To Expect On 2019 Spider
Apple Car Play and Android Auto
We would be surprised if the Spider added Android Auto and Apple Car play for 2019. Mazda hasn't announced the additions, so it is unlikely we will see this in the Spider. Those who have not used this smart device integration always ask, "who cares?" Those who have used it understand just how helpful the technology can be. In a nutshell, it gives you access to on-screen Google Maps and directions without having to buy nav.

50-50 Chance Of A Change - Engine Output Increases
Every Spider fan loves to remind Miata fans that turbocharged engines are easier to "Tune, Boost, Tweak, and Massage." Here is Fiat's chance to prove it. The 2019 Miata gets significant engine improvements and power will now be at 181 hp. We think there is a 50-50 chance the Spider will get a power bump on the Abarth and also the base trims. It would be a shame to watch the Miatas get all the goodies under the hood.

Dean McManis wrote on June 27, 2018 - 1:43am Permalink
The 26HP power gain in the Miata sounds like it will mostly be available at the top of the (higher) rev range, so I'm not sure that there will be a great gain in usable performance. The 124 Spider weighs 200lbs more than the Miata, so despite it having more HP now, and FAR more torque, it is slower. The Toyota 86/Subaru BR-Z has 200-400lbs more to carry, but 200HP and less TQ, so it is not quicker than the 124. I agree that it should be far easier to coax more power out of the 124's turbo motor reliably, and I think that Fiat should offer a significant power gain for the Abarth model (currently the Abarth model has no more power than the base model). Aftermarket tuners have pulled over 400HP out of the tiny 1.4L engine! So Fiat should be able to reliably make say 260HP/240TQ.
Elliot Silber wrote on July 26, 2018 - 8:56pm Permalink
I believe the 2018 Abarth has 2 or 4 more horsepower. No big deal, trying to be correct.
mike m wrote on July 7, 2018 - 7:24am Permalink
260 hp GAME CHANGER get in line everyone is going to want won ,including me!! PLEASE!!
Mike wrote on July 30, 2018 - 8:15pm Permalink
I have 2 2018 124 Abarths and just want to say that i have no problem with performance. Sport mode makes it peppy and it goes like a bat out of H...
Luigi wrote on April 20, 2019 - 9:47pm Permalink
The significant thing about this actually that when your visitors get to your page, they stay there! Your business online should be built around a area. It is a fun read, or perhaps I hope it happens to be!
Rainer wrote on September 16, 2019 - 9:31pm Permalink
Enough power already on my 124 Abarth Spider boasting 210hp and 129kw on the rear wheels. Just get it chipped or a piggy back unit. Much cheaper