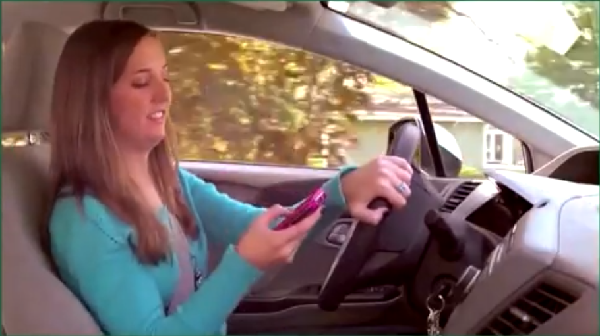 Can you top these 3 distracted driving horror stories?

We have all seen some crazy things on the roadways. Here are three distracted driving stories we have seen in the past week. We challenge you to top them.
Advertisement

Oral Hygiene
This past week while driving on a twisty back country road I saw a maxi-van approaching me head on. From a distance I could see that the driver was overcorrecting and the vehicle was herky-jerky. I surmised (correctly) that the driver was using her knees to turn the wheel. A distracted driver story about a driver using their knees to steer should not make this list unless they are simultaneously doing needlepoint and dictating a novel. This driver was not doing those things. Rather, she was flossing. And we are not talking about a one-handed floss with a little floss instrument with the string across a plastic appliance. This was old-school flossing with the floss all wound up around a finger on each hand. As she passed me she was intently looking in the vanity mirror which was pulled down between her eyes and the windshield.

Mobile Parenting
That was not the scariest distracted driver I encountered this week. The scariest one, from a crash standpoint, was a mom who was attending to a child. I was in a convertible that has an aluminum roof it stows in the trunk. Aside from roof one could not slip a single thin wafer into that space when it is stored, so any rear impact is going to total that vehicle. The road was a state highway of the type with a speed limit of 45 MPH, two yellow lines down the middle, and stores and streets on both sides people like to stop, and then turn into. The upshot of this is that if one is not paying attention, the driver in front may at any moment brake hard and stop to turn into a street or business. So there is a lot of braking to a dead stop from about 50 MPH.

When I looked back in my rear view mirror in one of these exact sudden deceleration moments I saw a ginormous Lexus GX sport 'ute bearing down on me. Instead of seeing a seated driver facing the back of my car I saw a pair of size zero Calvin Klein’s and a woman completely turned around to face the back of that leviathan. As I reached for the horn she turned back and slammed on the brakes. “Wow, close miss” I thought. Then she did that three more times as we passed through two more towns. Not to me, but rather the new car ahead of her. I pulled off and let her pass. Now behind her I could see her turn and futz with the whelp she was trying to either change a diaper on or possible change the clothes of while bucked into a child seat. I must admit I did follow her about a mile more than I had to just see if she creamed a car from behind. Frankly, the view was better from the other spot, but this was safer.

Youthful Splendor
Those were the two most likely bad crash distracted driving scenes I was part of. The most frustrating however happened in the center of my own town, which, since Hades has frozen over, is now being paved for the second time since 1865. You know the scene, police at either end of the work zone and they take half the street. They communicate and they let only one direction of traffic go at a time. As I sat waiting with a policeman about a foot from me who was also watching the oncoming traffic so as not be hit, we both saw a pretty young gal about 16 ½ come towards us with an Apple device pressed to the side of her face. She was chatting and laughing and doing a lot of things but not paying attention to the workers and cars she was squeezing past with literally about a foot on each side of her new Civic. What made me mad as hell is that policeman could have waved her over to a nearby parking lot and called for another car to give her a ticket. Kids under 18 are not allowed to use any handheld device in cars in my state and the offense is a “primary” offense meaning police can stop you for that alone. They need not be stopping you for anything else, like say speeding. The scene took place almost directly in front of the police station. He saw that girl and he ignored it. The upshot of that is that you eventually get older drivers flossing while changing a kid's diaper.

So that is our rant. Can you top it? Please comment below if you think you can.

Still image courtesy of Youtube.com and the Safety Council