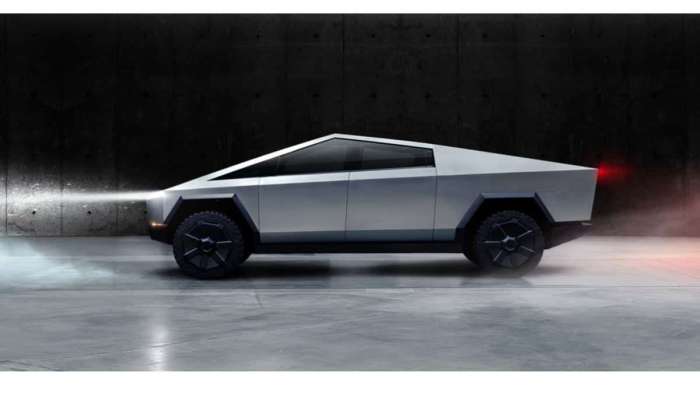 Can You Top Our Two Favorite Descriptions of Tesla's Cybertruck?

Tesla's new Cybertruck has truck owners laughing out loud and EVangelists working on excuses. Two descriptions of the new Cybertruck seem perfect to us, but maybe you have a better one.
Advertisement

In a hidden lab, unbeknownst to fans and investors, Elon Musk and his team of imagineers have been secretly toiling on a new project vehicle. The goal is a mark of simple genius: To unseat the Pontiac Aztec, widely regarded as the worst design fail in automotive history. The world reacted with shock and awe during the livestream reveal. The program featured Elon Musk as ringmaster, what looked a lot like a guillotine, a minion named Franz, and a clearly heard F-bomb uttered by the CEO of a public company. If we ever see Franz again we will be shocked.

As hokey as the whole "bullet-proof" armored Tesla glass failure was, the Cybertruck's design language overshadowed the fiasco. The truck looks like a character from BMW's Chris Bangle's newest children's book. If the Cybertruck fails in the marketplace among adults, it may have a huge revenue stream as a He-Man vehicle in the next remake. 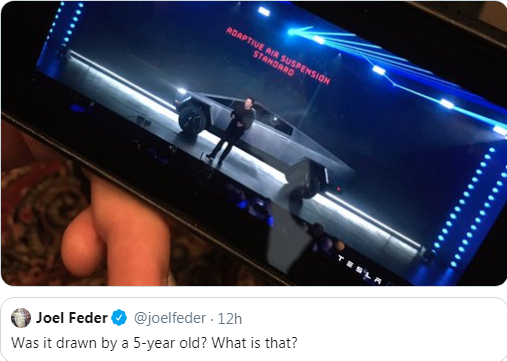 Let's not dwell on the opinions of one Torque News writer. What the heck do I know anyway? Let's consider a pair of comments that succinctly describe Tesla's new Cybertruck design from those with more importance to the truck's success. First up, "Was it drawn by a five-year-old? What is that?" This comment was tweeted by a person watching the livestream. An EV hater? Hardly. This was posted by the Interactive Content Manager at Green Car Reports. This is not the opinion of this editor in the official capacity of his job. It is also one of the most honest and apt descriptions from anyone in green vehicle media we have read.

What the automotive media thinks is not really at issue. What will truck buyers think? Cruise over to any vehicle forum this morning and you will find a lot of strong opinions. Nearly all of them are negative. Most of them pretty funny. One we watch closely is the Facebook Chevy Silverado and GMC Sierra Club. In order to find meaningful numbers of buyers, Tesla is going to have to steal share from these truck owners. One comment we will paraphrase that seemed spot-on to us was "Was that thing made on Minecraft?"

Setting aside the fun and games for a moment, one of our peers in the automotive industry reached out to your author this morning and asked, "Isn't it being tough to break the windows a safety issue? What about entrapments for emergency crews to access someone?" Yes, Jimmy D., it absolutely is. Here's a sad example of entrapment risk in the real world.

Ahh, who cares what automotive safety experts, green car experts, and truck buyers think? The Cybertruck is for sure going to be bullet-proof, cost under $40K, and sell like hotcakes. Right?

Note: The author of the tweet shown in this story approved its mention here.

About the Author: You know John Goreham as a Torque News writer/editor who primarily focuses on safety, green vehicles, and new products. In addition to his work at Torque News, John Goreham has reported truck trends and news for a major truck enthusiast publication since 2014. His truck market and general vehicle reporting is also published in over 100 daily newspapers in the U.S.

DeanMcManis wrote on November 22, 2019 - 3:49pm Permalink
You can't please all of the people all of the time. And when you stretch the idea of what the truck of the future will look like, you are going to alienate many prospective buyers at first glance. I was more concerned about the styling before I saw the CyberTruck than now. With Elon saying that it was going to look like something out of Blade Runner (I'd say that those movie prop vehicles are among the ugliest ever designed). But even though this truck design looks wild I think that it will appeal to many buyers who want to stand out. It is not like the Humvee or Rivian are attractive vehicles, but they are eye-catching and relatively robust and practical. For the safety issue Tesla will have to design some sort of way that people can pop out the windows in case of an emergency. It reminds me of solenoid door openers that need a manual release in the case of extreme failure and power loss. Two of my cars have solenoid door openers, and it's pretty obvious where the emergency manual releases are in the cars, but it is a consideration, if not a real problem. I've met several Pontiac Aztek owners, and the thing that they have in common is that they love their cars, even though I would never own one. Similarly, the Edsel's design was years ahead of it's time, and sales fell flat because most people were not ready for that kind of new styling. The CyberTruck looks exactly like it promised. And most people are going to love it or hate it in the same way that the Rivian's nose styling is polarizing. If Tesla builds their CyberTruck at the announced sub-$40K price, and comes out with it soon with all of the features promised, I think that it will be a sales hit. Not for everyone, but with enough eager buyers for Tesla to make a profit.
Peter Rust wrote on November 23, 2019 - 11:45pm Permalink
I too do not like the look of the truck but your analysis is fatally flawed. You are assuming that owners of Chevy, Chrysler or Ford trucks are the buyers and because they are not interested, the truck will not be a success. Tesla has created a new market segment with this vehicle and the pre-orders confirm this. 146,000 on the first day which is slightly below the 180,000 for the model 3. The cost of the pre-order is less, a non-refundable $100 vs a refundable $1000 for the Model 3, so there there will be a lower final conversion rate but the magnitude of the orders can not be denied. It will be interesting to see where these buyers are coming from and what vehicle sales will be impacted.
DeanMcManis wrote on November 24, 2019 - 4:03am Permalink
Musk just tweeted..."146k Cybertruck orders so far, with 42% choosing dual, 41% tri & 17% single motor", adding separately that the orders were achieved without any advertising or paid endorsements." So even though it is not the truck that many expected it to be, a LOT of people want to own one.