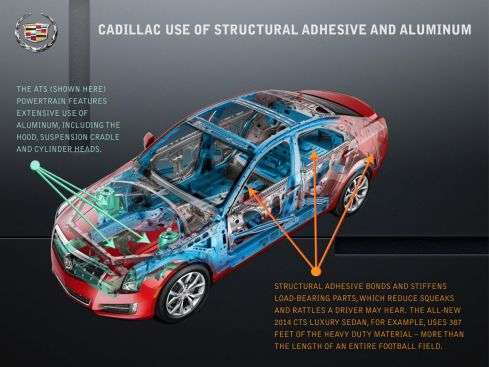 One old trick and one new one make the 2014 CTS from Cadillac stiffer and lighter than the competition.
Advertisement

The 2014 Cadillac CTS will be leaner, meaner, longer, and stronger. A complete redesign, the new CTS has a new look, new engines, and will use advanced alloys and materials throughout the vehicle to make it lighter and thus perform better. Cadillac’s plan is to produce the lightest vehicle in its segment with the CTS.

The main material Cadillac is relying on to make the car lighter is aluminum. For many years luxury cars have been moving away from steel when possible towards the lighter alloy, which is also more corrosion resistant. In a first for Cadillac, starting with the new 2014 CTS all four doors will be aluminum.

Both bumpers will switch from steel to aluminum as well. John Plonka, CTS program engineering manager commented on tis saying “Reducing overall weight is a key element in producing a car that delivers agile handling dynamics. By rethinking very traditional elements, such as such as materials used for bumpers and doors, we are able to save precious weight and stay true to delivering a vehicle that is fun to drive.”

Other part of the 2014 Cadillac CTS which will be aluminum in the new model are:

Overall weight savings from these components will be about 70 pounds. The new doors reduce weight by 55 pounds. The upshot of this program is that the new Cadillac will weigh less than the current BMW 5 Series, a benchmark that Cadillac has exceeded. When it goes on sale the CTS will have two new engines to compete better with the BMW. It will have a 2.0 turbocharged powerplant and also a twin turbocharged V6. Interestingly, the BMW 5 series can say the same. However, BMW's turbo six has about 100 horsepower less than the CTS will.

In order to make the car stronger and stiffer, the new 2014 CTS will employ structural adhesive in huge quantities. Yes, glue will be used to bind parts together that were previously only spot welded, friction-stir welded, or fastened. By adding over a football field of the bonding agent Cadillac says it has improved the stiffness of the car compared to the old CTS by 40%. Cadillac is not the only manufacturer to be adding a lot of Elmers to the seams of its cars. Lexus in both its new GS and IS sport sedans has done the same. The GS and IS are both rear-drive performance luxury models that compete with Cadillac’s CTS and ATS respectively.

The ATS shown in the photo is the CTS' smaller sibling in the Cadillac line. The first vehicle from Cadillac to win the North American Car of the Year Award, the ATS has been doing very well in the marketplace. At only 3,300 pounds the ATS also employs these manufacturing methods, is among the lightest vehicles in its class, and in fact prices start at just about ten dollars per pound. The ATS uses aluminum in its hood, drivetrain and suspension.

This fall the leaner, faster 2014 Cadillac CTS arrives in showrooms.