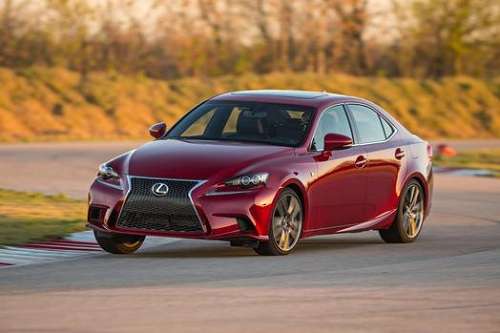 Is the Lexus IS350 F Sport the world's best sports sedan?

The reviews, reports, and comparison tests are starting to show that the 2014 Lexus IS350 F Sport is the world's best sports sedan. Could this car be the one that unseats the BMW335i M Sport?
Advertisement

Finally, it seems to have happened. An automaker has brought forth a vehicle that challenges the supremacy of the legendary BMW 3-Series. For many decades the BMW 3 has defined its class. That class used to be a compact sport sedan. However, like most of us, the 3-Series has grown a bit. Settled down somewhat. Become a little more sensitive to doing things that are good for us. And that may be its undoing. The reports are in now and the most trusted automotive publications (including this one) have nothing but good things to say about the Lexus IS350. Could this be “The One” which finally can match up against the BMW 335?

Let’s get some things out of the way. Look up to the right of the text here and in blue you will see that this is an “opinion” story, not news. That matters. Less polite journalists often try to write their opinions into news. Why? It pays better. One more thing. The writer whose attempt at English you are now reading owns an IS350C. My bias is now out there. How many times have you read a BMW review written by a BMW owner who failed to mention that? I know how many and you would be shocked.

When one of the Torque News team reviewed the Lexus IS line after a media day sponsored by Lexus, and his review was very positive my ears perked up. When I was given the Lexus IS350 and IS250 pricing by the manufacturer and I wrote the price analysis of the Lexus IS line, I was impressed and started to see just how badly Lexus wants to win buyers. However, it wasn’t until I read Car and Driver’s June issue, which features the IS350 F Sport competing head to head with the Cadillac ATS 3.6 and the BMW 335i M Sport that I would allow myself to believe what I seemed to be surmising. That Lexus has finally done it. Built a legitimate BMW 335i competitor.

Spoiler alert! I am going to tell you who won the C/D comparo. Look away now if you want to read it before you know the winner (which C/D reveals on their cover). Just bookmark this story! OK, here it goes: In a fair fight, with the best sporty BMW 3 Series competing against the best Lexus IS350, and the best Cadillac ATS, the BMW does not win. You might not be a car nut like all of us who work at TN, but I can tell you, having read hundreds of comparisons written by the best automotive publications over the past 20 years, this never happens. This is like reading that Floyd Mayweather Jr. was just knocked out by a woman you never heard of.

First of all, a true direct comparison is rare. The cars are often mis-matched, with the luxury package of one competing against the sport package of another. Or the new model of one versus the outgoing model of another. Worse, the BMW is often spotted about $10K. Meaning its entrant is much more expensive than the rest of the competition. Those wins are always less impressive because money can buy you love in the car world. Lathering on 20% more gadgets, better seats, better wheels and more goodies has won BMW more comparos than it deserved. In the Car and Driver match-up the cars are all the sport version, all have the same power, and all have the same price (within a couple grand, the BMW still being the priciest). Thus, this showing by Lexus and Cadillac is so much more meaningful.

Was the winner of the C/D comparison the fastest? Nope. Was it the one with the most performance parameters won overall? No. However, it should be stated that is not at all unusual and that BMW has many times walked away with the win after being not the fastest in the comparison. Deservedly so, and much to the chagrin of the readers who are fans of the loser cars.

I could tell you my own thoughts on the Lexus IS350 I own and you would be surprised. The last generation IS was far, far from perfect. My opinion would be biased anyway. Opinions aside, it is pretty clear that there is a monumental shift in all things car coming. Tesla is now putting out a car that kicks the stuffing out of the big German luxury/performance sedans. The Camaro is now able to spank any two-door coupe with a V8 it decides to, and the BMW 3 has started to lose comparisons to rivals. Your opinions, rants, raves and insults are welcome in the comments section below.