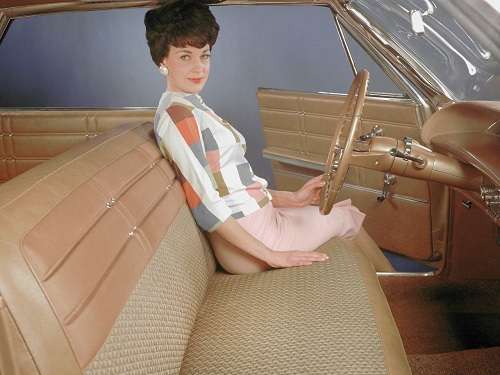 The last car in North American production with a bench seat goes away after this year. Let's take a last look back and remember...
Advertisement

For many Americans the front bench seat was as much a part of dating as dinner and a movie. Every boomer since about 1955 drove one at some point in their lives and many will look back fondly at the front bench seat. The 2012 Chevrolet Impala is the last car you can get right now with a front bench seat and it will soon be out of production. Chevy put out a press release today that was unusually frank, and it provides us a chance to look back at a part of Americana.

As a seat it was lousy. If you turned the car your butt would slide sideways. There was no arm rest on the right side so your arm either hung there, or God forbid, you actually used two hands on the wheel. If you were out with pals the front middle was the last place to be. In terms of safety it was a nightmare. Who cares? The front bench seat had other attributes that made it one of the best inventions in American history. One thing it was useful for was resting your arm along the top of the back bench. And if there was a date in the car, that worked pretty well…

Clay Dean, GM director of design said it plainly and respectfully in a press release today; “There is certain nostalgia for bench seats, like being able to snuggle up with your date at a drive-in movie.” This being a family publication we will just leave it at that, but Mr. Dean points out the fact that the one place that dates could rely upon for some alone time was in a car and the front bench seat was not designed to be a great seat.

The first front bench seat in a Chevy was produced in 1911. Having made it all the way through the 2013 production year that means the seat was in production for 101 years straight. Like rear wheel drive, V8s, proper size, and many other desirable features cars used to have, but have been killed off by fuel economy regulations, the bench seat will continue on in trucks.

Whether the soundtrack in your mind is Frank Sinatra, Frankie Avalon, Frankie Goes To Hollywood (mine), or Frank Ocean, take a minute to think back to high school and remember the front bench seat.