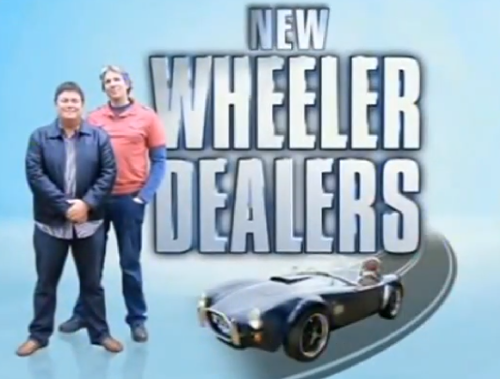 The British are coming - to your TV part 2, the arrival of Wheeler Dealers

Last week, Torque News brought you an overview of the hit TV show Fifth Gear. In this second part we will provide our enthusiast readers a glimpse of the fantastic British program Wheeler Dealers. Like Fifth, Wheeler Dealers benefits by being British. Although a reality show, unlike in American TV there is nobody yelling, or insulting anybody else. There is no character in a bikini, and nobody has to eat a bug to get ratings. Rather, two gents from across the pond find a used classic and bring it back to fighting trim. They then “sell it on” to a “punter” and everyone is happy with the result.

Wheeler Dealers began in the UK almost ten years ago. The show stars Mike Brewer and Edd China two very different gents who together are more than sum of their parts. One of the most refreshing things about Wheeler Dealers is that the show targets “Modern Classics” for purchase, renewal, and resale. They often use the term “rescue” in the show. The general concept being that they find desirable, and often, much loved, models that are run down and in need of some TLC, and then fix them up. Mike makes a big show of trying to turn a profit, but actually, they don’t. The show doesn’t account for Edd’s time “turning the spanners” and therefore it isn’t really all about profits.

Mike Brewer
Mike Brewer is the driving force on the show. He is frenetic in a vey endearing way and although he calls his buyers “Punters”, which is like calling them bettors or gamblers, the cars these folks get are in fact in great nick. Mike is a used car salesman and he knows the cars well. He also has a wide variety of car knowledge and with the popular models, the ins and outs of the specific good and bad years. Of course he likely freshens up that knowledge prior to taping, but the level of understanding he has is obvious and can’t be faked. The best part of the show is Mike’s negotiating style. He gives the audience an inside line on what he plans to offer and why, and often get is – but not always. On one show a German seller gets quite upset and nearly physical when Mike low-balls him on a brown Mercedes SL (yes, brown). At the end of the show the tables are turned and Mike often softens his bottom line to move the car. His signature line is “Hold out your hand!” which means he is about to shake it and firm up the deal.

Edd China
Edd is the guy you would want next to you in a submarine when the lights go out. He is not only able to tear apart anything mechanical, he knows how to do it most time and cost effectively. Unlike many mechanical heroes, he is not afraid of electrical and even software troubleshooting. His network of super-specific specialists are his go-to solution for things that make no sense for him to do solo. He has also restored wood laminate trim on the show himself and he can use a para-cord rope to install a windscreen like nobody’s ‘bidness. Edd’s signature move is paint. He uses spray cans to handle small jobs and the results are amazing. He also does all of the paint prep when a vehicle is being re-sprayed for a repair or a complete top to bottom paint job. On many episodes he purposely leaves the cars dirty until the “reveal” which then show the car having had a “Bucket of water poured over them.”

Paul
Paul is the third man, and often forgotten third amigo. Paul never speaks on the show. Ever. He drives the tow vehicle, helps Edd lift heavy things in place and also is the brake bleeder partner to Edd. Paul appears to either be the Deacon of his church, or an axe murderer. Possibly both. We say “Appears.” In fact, Paul Brackley is the show’s technical producer as well as the occasional cameo shop assistant.

Translation Guide
Because the US and Britan are separated by a common language we have compiled this useful guide to WD viewing:

MOT – Ministry of Transportation Test. A very detailed test of the car’s safety and emissions systems required to register a vehicle for use in the UK. The MOT is actually an ally of the show, because they often bring a car back into compliance and thereby add significant value to it for resale.
Spanners – Wrenches
Punter – A not so endearing term for buyer taking a risk
Steady on – Go forward with quiet confidence
“Give it the Welly” – Floor it. Derived from the Wellington boot made famous by the Duke of Wellington. In other words “Give it the boot!”
Nick – As in “Good nick” Means good condition.
Blowing exhaust – An exhaust with a leak. An MOT failure, and one of the most common repairs the show does. Often with axe murderer Paul as a helper (Kidding Paul. Just a joke. Not at all serious. Please smile Paul)

Wheeler Dealers keeps it fresh. The show has had Swedish, German, French and US buying expeditions, and recently has shaken up the buy-sell arrangement a bit offering the finished cars for sale to fans, or back to the prior owners. Look for Wheeler Dealers on Velocity Channel Wednesday nights, and don’t forget to DVR Fifth Gear, which follows.

Photo and video courtesy of Youtube.com and Adam Kalnoki

Facts for this story were obtained by the author who has seen every episode, but also were checked on Wikipedia