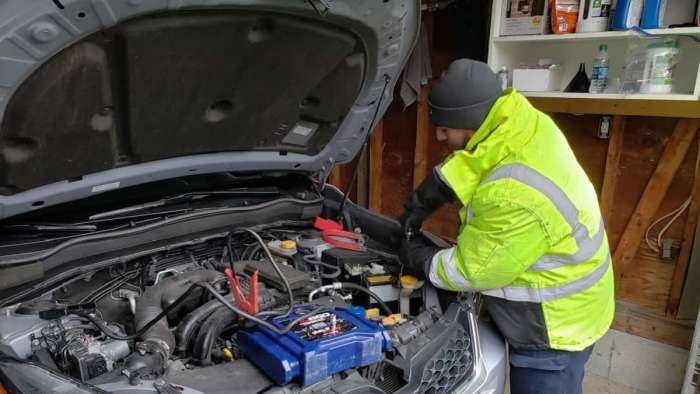 Jump starting cars is a very popular topic on forums. Here’s why you should not jump start your car.
Advertisement

The next time you are in a situation where you are tempted to jump start a car using your car as the savoir, don’t do it. The upside is not worth the risk. Here’s why.

Dead Batteries Are Part of Life
Anyone who owns a car long enough will be confronted with a dead battery. Batteries all die eventually, and very few of us change them proactively before the trouble results in us sitting behind the wheel with the familiar “Click Click Click” and no engine turning. The instinct the person in the dead car has is to immediately ask the closest human with an operable car for a jump start. It’s in our nature. If you are the person with the running car, here is why you should decline.

Before we begin, if this jump start will save the life of a future President, of help to save humanity for another day or two, by all means, be a hero. Short of that, our suggestion is to take other options.

Jump-Starting A Car Comes With Risk
Unless you are a mechanic and have a vehicle you are willing to sacrifice, our suggestion is not to jump-start a car with your running car. The folks at Car Talk* know a thing or two about cars. The brothers that hosted the PBS show for much of the last century started out scientists from MIT and then ran a successful auto repair business for many decades. They have a handy Car Talk guide for jump-starting. It begins with not one, not two, but three warnings for folks considering jump-starting a car. Worried yet?

If not, you should be. Learn from Stewart Fip, a Car Talk Community member, who jump-started one of his own cars with another he owns. Shortly after, Stewart’s infotainment screen on the vehicle had some problems. Here is what he reports, “A series of columns of dashes scrolling through the screen. Looks like The Matrix! Additionally, the speakers make a popping sound every 5-10 seconds. I removed the fuse for the radio and replaced it with another, same result. Removing the fuse does stop the popping sound in the speakers though, which seems obvious. Incidentally, this behavior persists after the ignition is turned off, it’s just that the display is not back-lit.”

Messing up a jump start can happen to even experienced vehicle owners doing their best to keep both vehicles safe.

Instead Of a Jump Start Do One Of These Two Things
So, how can you manage to live in a world where you can’t use a perfectly functioning vehicle to help one that is not working? Well, there are really two options. First up, you can call for roadside assistance. Every new vehicle comes with roadside assistance. Dealers and automakers give away this feature because the folks who sold you the vehicle will later attempt to sell you that service when your free period ends. Here’s a little secret you may not know. The AAA network is behind the scenes of many of these manufacturers’ roadside assistance programs. So, you call the number on your RAV4’s manual, but it’s the same guy in the same truck that will be saving AAA members all day long.

So, we are fans of AAA. The big difference is that AAA is not tied to a specific vehicle. It is a personal membership and you can help anyone you like with it. A stranger. Your wife. Your girlfriend, your boyfriend, or heck, all of the above. Or yourself. That is the beauty of AAA. It is always there for YOU, not your specific car.

AAA techs are savvy. They don’t show up and connect the jumper cables to the truck they drove up in. Rather, they will use a jump starter. A little box with a battery that can start the stranded car. AAA will also offer a diagnosis on why the dead car is dead. Is it just a bad battery, or is the alternator? The answer has a $400 difference.

You yourself can buy one of those jump starter boxes for short money on the World Wide Web and keep it at home, or at your shop, or your remote cabin. Anyplace you want to help people. We don’t suggest keeping it in your car though. Batteries in a trunk can cause trouble.

So, 764 words into this story will remind you that you can certainly jump-start a car in a dire emergency. It works great in movies. Almost every time you attempt to jump-start a car with your running car it will work. But there does exist the chance that you will be the next Stewart Fip. You can decide your own fate. Are you going to do the easy thing and help jump a car? Or are you going to call roadside assistance? Tell us in the comments below.

Image by John Goreham. Re-use with permission only.

Digitaldoc wrote on June 29, 2020 - 1:18pm Permalink
I have jump started my car several times through the years, as well as aided my friends and coworkers through the years, as well as a complete stranger during Hurricane Sandy that had misfortune of a dead car in front of my house. When done properly, I have never had any issue with my vehicle after. I think the key is to disconnect the cars quickly as soon as the dead car gets running.
Mark Day wrote on June 29, 2020 - 2:15pm Permalink
The complexities of new vehicles is getting out-of-control. I'll add this jumping information to the list of reasons why not to buy one. Other reasons: auto stop/start, direct injection, active fuel management, turbo chargers, tiny engines.
Sheryl wrote on August 7, 2020 - 6:29pm Permalink
Jumping a car is so fast and convenient. We used our 2005 Scion xB to jump our 2015 Prius when it stalled at the grocery store just a couple of weeks ago. It created no problem for either vehicle, but our Scion is pretty simple and we had jumped other cars with it before. It's sad that newer cars are getting so complicated that you can't use them for jumping.
noah arribas wrote on September 14, 2020 - 11:59am Permalink
This is ridiculous, Like anything with your car if you do it wrong you can mess it up, do it right and I've NEVER had an issue. Why should I spend $100+ year on AAA when I rarely break down and can jump my car within minutes instead of waiting an hour+ for a tow driver?
John Goreham wrote on October 7, 2021 - 1:20pm Permalink
Setting aside the topic, I'm really glad to have you as a reader, Noah! See you at my favorite FB club!
Well, ugh wrote on April 28, 2022 - 3:17am Permalink
What nonsense, fear mongering. You can jump another vehicle or yours perfectly well. Scummy article. Carry jumper cables. I have had my trucks jumped 24-36 times in my life (children leaving lights on, but also my or my husband’s dong once or twice). We have probably helped jump as many people’s cars in my life. Except one. Someone we have known for 30+ years refused to jump our car when stranded. Wow. Nobody else around, we had to wait a day for a decent person to come help us.
John Goreham wrote on April 28, 2022 - 12:17pm Permalink
Can you explain better how "yours or your husband's dong" made the car's battery die? That is for certain a better story than we wrote!

Tsingshan's Threat to Tesla: EV Maker Is In Battery Crosshairs
Tesla-Funded Research Reveals One of The Biggest Mysteries of EV Battery
END_OF_DOCUMENT_TOKEN_TO_BE_REPLACED