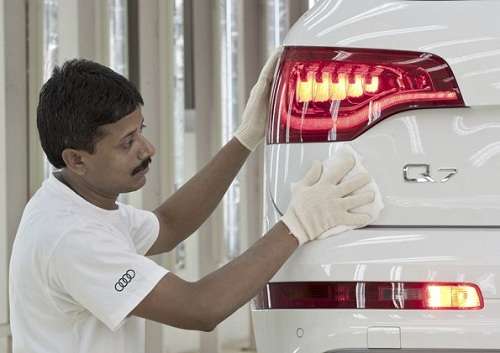 Audi to build Q7 in India

In the United States Audi sells about 12,000 automobiles per month. Those are hard fought sales. BMW, Mercedes, Lexus, Infiniti, Cadillac and others all have viable competitors to the Audi models for sale. To increase sales Audi has to work very hard. This is a situation many automakers face and they look for ways to achieve their goal of selling more cars in new ways. One way to do that is to sell into markets that have not to date accounted for many sales.

China is becoming a hard place to win. It is an easy place to sell some cars, but Buick is quickly becoming the name of luxury there and all the automakers now have a presence. To keep the existing models it has already designed and already knows how to build and sell profitably growing, Audi is looking to India. Presently, rounding up a bit, Audi is selling about 1,000 vehicles per month into India. That may seem like few vehicles, but the sales curve is steep, and unlike the US and China, there is no known limit yet to how many Audis can be absorbed by the populace and governmental agencies that buy premium sedans.

In order to make the Indian market as successful as possible, Audi is now planning to build the Q7, arguably its flagship, in India. The location of the facility is in Aurangabad plant, in the Indian state of Maharashtra. Audi builds vehicles here in the group plant Škoda Auto India Private Limited (SAIPL) in Aurangabad. To date Audi has been building the A line models, A4, A5, A6 at the facility and also the Q5. Commenting on the reasons why Audi is building in India, rather than simply import this relatively small number of vehicles (so far), Dr. Frank Dreves, Audi Board Member for Production, said in a press release, “The very good infrastructure in the plant, efficient working processes, a qualified workforce and a well-developed logistics environment, along with the surging growth of the Indian market, were the factors that motivated us to expand the Aurangabad plant.”

Audi supplies its full product line in India via dealerships, which will total 25 by year’s end.

John Goreham wrote on November 9, 2012 - 7:59am Permalink
Dude in the picture could not look more like Pedro fdrom Napolean Dynamite. Vote For Pedro!