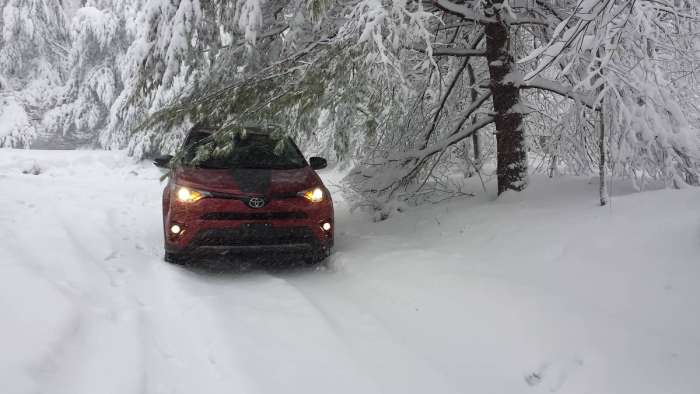 Is All-wheel Drive In Your Crossover Enough, or Do You Really Need A True 4X4?

Crossovers are a compromise by definition. Here's how to know if you need true four-wheel drive or if all-wheel drive will work for you.
Advertisement

So, you want to buy a crossover. You love the idea of sedan-like fuel economy, a car-like ride, great visibility, easy to enter and exit body design, and the huge cargo area. However, your friend Jethro has a Wrangler with a lift kit and is warning you that "all-wheel drive won't get 'er done." What now? 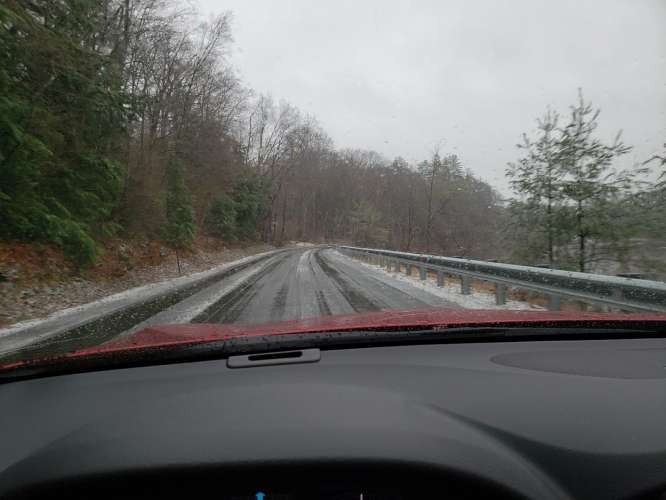 All-Wheel Drive vs. Four-Wheel Drive - Paved Roads
On paved roads, all-wheel drive (AWD) is always the way to go. Four-wheel drive (4X4) is inferior in many ways. Particularly at higher speeds and when turning. There is simply no real argument for a 4X4 on pavement, so we won't waste the keystrokes deabting it. 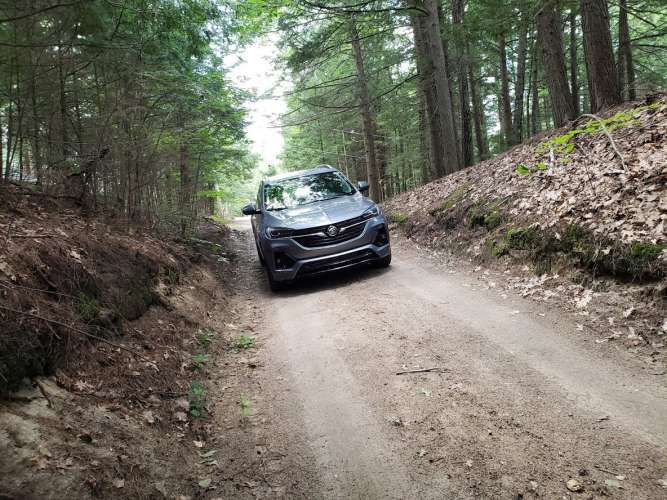 All-Wheel Drive vs. Four-Wheel Drive - Un-Paved Roads
On dirt roads and roads that are private long driveways the two are similar in their abilities as long the road is actually "a road." New Hampshire has thousands of miles of dirt roads, and we test vehicles on them non-stop in all four seasons. All-wheel drive works brilliantly on dirt roads. There is no real basis for any argument that a 4X4 is needed. AWD in a crossover like a Buick Encore GX is the way to go whether the road is snow covered, muddy, dry, whatever. 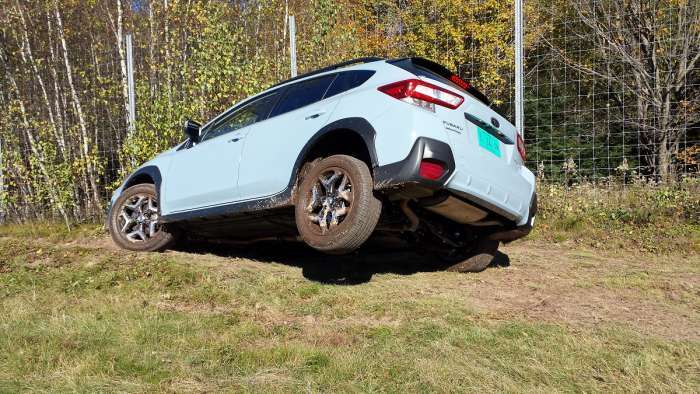 Forest Paths
Once you leave the dirt roads, the forest begins. Here, ground clearance helps a lot. Vehicles like the RAV4 Adventure, Subaru Forester, Outbadk, Crosstrek, and Jeep Cherokee crossovers all have around eight-inches of minimum clearance. If you take your time, scout out the trail, and have some experience, you can overcome obstacles with a much higher peak than that minimum. You can also ford small brooks and streams with no trouble.

This is the point at which a 4X4 like a Jeep Wrangler, Ford Bronco, or a pickup begins to make some sense. However, once the trees are too close together, you are limited by the width of the vehicle and in some cases, the length. Compact vehicles like a little Jeep Renagade may be able to go deeper than a Ford Super Duty. Know your needs. 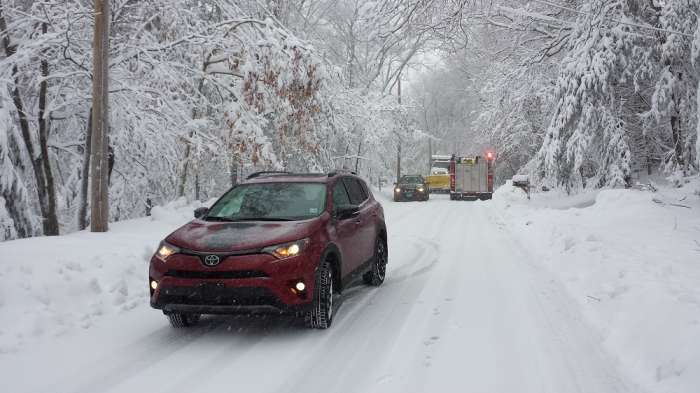 Crazy Snow
In snow so deep that normal cars are staying home, all-wheel drive is brilliant. We have driven in over a foot of unplowed snow many times in crossovers with AWD. Again, ground clearance matters, but tires are a key here. Swap out your three-season rubber for a set of winter tires and your abilities are significantly amplified.

Sand
Visit the Cape Cod National Seashore someday and watch the Subarus in sand. They are amazing. Deflate the tires to about 20 psi and have at it. A 4X4 works equally-well. Tie

Rock Hopping and Mud Whomping
If you plan to remove the paint along all the sides of your vehicle, dent up all the panels not protected by rock rails, and actually want to get stuck and use a winch, go for the 4X4. Or, if you want to have the look of a vehicle that lives that lifestyle you need the 4X4. But just for grins and giggles, when you see the lifted Jeeps and trucks at the nail parlor, note how many are scratch and dent-free. These are posers. The kind of people that wear camofladge but don't actually hunt. Although we think that 4X4s are the smarter choice here, note that many of the things folks do to make a 4X4 off-rad capable can be done to a vehicle like a Forester. 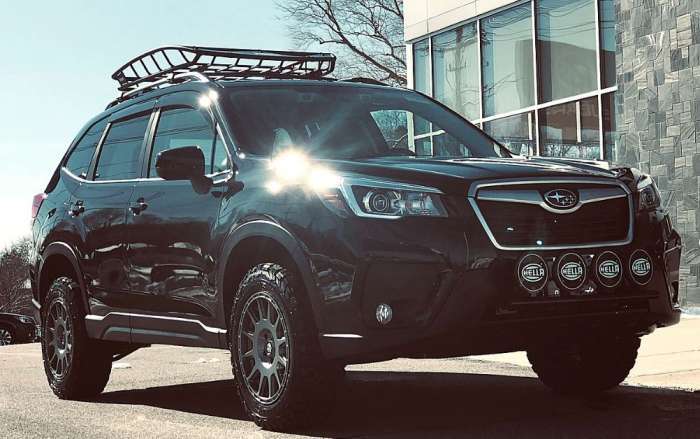 Take it from the folks who test vehicles day in and day out. We've driven all-wheel drive crossovers on Land-Rover 4X4 trails and the capabilities of these compromise cars is mind-blowing. Unless you are in the fraction of a percent of folks who actually use vehicles on rocks and in mudholes you need a 4X4 like a fish needs bicycle.

Mark Day wrote on July 27, 2020 - 10:44pm Permalink
From JG: " There is simply no real argument for a 4X4 on pavement..." Disagree - I have 4WD in a crossover and need it. It's a high-performance vehicle and would spin the front tires in spirited initial acceleration without 4WD - especially on wet roads. I can "make" a parking space anywhere, ditches, etc., knowing I can get out and be on my way. And the final plus - my vehicle's 4WD cuts out at 25mph, automatically, having the best compromise of 4WD and fuel economy.
John Goreham wrote on July 28, 2020 - 9:46am Permalink
Regardless of what Toyota may label it, I respectfully submit that your vehicle is equipped with part-time AWD. In some ways, four-wheel drive may be applicable as a term, but without a differential that locks (at either end), and with the ability to disengage automagically, such a system is "All-wheel drive." And it is definitely an advantage.
Mark Day wrote on July 28, 2020 - 3:11pm Permalink
AWD systems, as in the RAV4 Prime, don’t react until an input is received (wheel slippage, etc) with the resulting lag in corrective action. A review of the RAV4 Prime has noted this undesirable trait. With the system in earlier RAVs, 4WD is always fully engaged below 25mph – no lag. Call the system whatever term (modified AWD?) but for my usage it’s about perfect – and, of course, no longer available in any vehicle.
digitaldoc wrote on July 28, 2020 - 5:57pm Permalink
There is significant heterogeneity in AWD systems. The RAV4 Prime uses Toyota's eAWD system, with the ICE powering the front wheels, and electric motors for the rear. The advantages are weight savings, and cost savings, although it is not considered a great AWD system in terms of traction. Not all mechanical AWD systems are equal as well. Some are front wheel drive biased, while others are real wheel drive biased for example. They also vary if they can be locked, or how much power can be sent to each wheels. Some are also better for performance driving, while others are best in inclement weather. It is frustrating that the manufacturers are not more forthcoming on these differences, and just label these vehicles as AWD which contributes to the confusion. I drove my 4Runner with 4WD for years, and now have a CX-5 that is AWD. In bad weather, the AWD system is just as good for traction, maybe better than the 4WD. I also like that I do not need to remember switch it on!
John Goreham wrote on July 29, 2020 - 8:25am Permalink
Well said. You should seriously consider being a writer at TN, or at least dropping some guest articles. I drove the CX-5 back to back this month with a Forester on an unimproved dirt road. Surprisingly, the CX-5 was better! Smoother, less wheel spin, and it just felt more stable. There are so many differences it is hard to list them all. The main theme I am finding is that part-time AWD is so good with the right tires, I would never consider a true 4x4. Thanks for taking time to post.
Matt wrote on July 30, 2020 - 11:24pm Permalink
Finally an adult discussion without insult, cursing,etc...it was a pleasure reading it.
Ginny wrote on January 5, 2021 - 12:38pm Permalink
First of all, I bet you haven't driven high mountain Montana trailhead roads. Second, your spelling mistakes makes me wonder if your story is even credible.
Nasty wrote on April 18, 2022 - 5:41pm Permalink
deabting, Outbadk, Renagade, Subarus, camofladge, Patroit. Six spelling errors on a nine paragraph story is just atroshish (see what I did there lol)