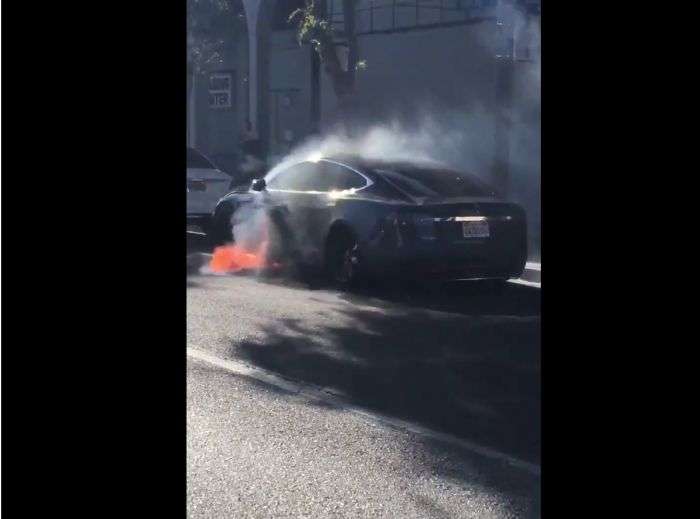 Actor Tweets About Burning Tesla Model S - How Does The Response Compare To Her Other Recent Tweets?

Actor Mary McCormack recently tweeted about a burning Tesla Model S in which her husband was an occupant. Many Tesla fans say this is not newsworthy. The reaction to her tweet says otherwise.
Advertisement

This weekend an actor named Mary McCormack tweeted an image of a burning Tesla Model S. The vehicle was not in an accident. It simply caught fire. Her husband was in the vehicle and she tweeted a video of the car on fire and some commentary you can see below. We are not reporting today that a Tesla was seen burning again, or that a Tesla has yet again found another way to find itself on the news for safety reasons. What we find interesting and have done just a smidge of research on, is that her tweet was the most popular by far of her recent tweets.

@Tesla This is what happened to my husband and his car today. No accident,out of the blue, in traffic on Santa Monica Blvd. Thank you to the kind couple who flagged him down and told him to pull over. And thank god my three little girls weren’t in the car with him pic.twitter.com/O4tPs5ftVo

As of this morning, the tweet had received about 6,000 likes, about 3,000 retweets and had earned about 1,200 comments. Celebrities are all about publicity and a popular tweet is never a bad thing. When we first viewed the tweet we found it interesting, but not for the reason that most of the commenters are discussing. What we find interesting is that commenters are discussing it.

Let's compare this tweet by the actor to some other tweets she recently made and look at the responses. To keep things simple, we added the retweets, likes, and comments up. They add up to about 10,200 interactions in just a few days. Here are some interaction counts for tweets by the actor from prior to that.

We did not count tweets that the actor retweeted or interacted with. Just the ones she herself posted. Our conclusion from looking at the tweets and the responses this actor received is that a burning Tesla is more "newsworthy" than the topics of childhood disease, the Second Amendment, voting, veteran suicide, missing migrant children, and Marine families combined. The second most newsworthy topic is jewelry.