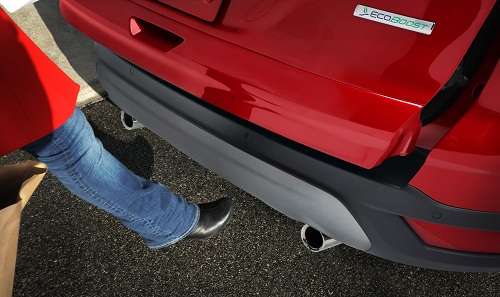 The 5 coolest features your car will soon have, including 360° cameras

These 5 new features soon available on most cars will change the driver’s experience for the better, including the 10,000 mile oil change interval.
Advertisement

One thing that we all know about fabulous new car technology is that the time between when it is introduced on expensive cars and the then trickles down to more affordable cars is getting shorter and shorter. Here are the 5 most fantastic features, as decided by the Torque News writing and testing
staff, available on mainstream cars and trucks.

1) The ten thousand mile oil change interval. How many times have you had your oil changed and it drips on the floor that night requiring a return trip to the service department? What a hassle. If you kept your car for 99,000 miles would you rather change the oil 33 times or 9? In years past engines and available oil technology required that oil be changed about every 3,000 miles. It was universally accepted that the average volume of oil in an engine would be 4 or 5 quarts and that the filter would cost $5.00 and last about 5,000 miles. MINI and other manufacturers decided to stop this nonsense and design their engines and filtration to go much longer. New oil technology can last 10,000 or more miles and engines don’t wear out due to improved technology.

2) Cap-less fuel filler. Ford introduced the capless fuel filler recently and the world collectively asked “what the heck took so long!?” It’s all about the Benjamins. Gas caps cost automakers about 70 cents. Capless fuel filling costs more. Thank goodness someone finally took the step. How ridiculous is it that we have to open the fuel door, remove the cap (making your hand smell like gas), stash the cap in its lousy little cap holder or let it fall onto the paint, then reverse all this? Now it is a 2 step process and no more “Check engine” lights if the cap is accidentally left off.

3) Automatic tailgate and trunk opening. The 2013 Ford Escape has a great feature that allows a driver to simply wave their foot under the back of the tailgate and it will open. Mercedes and others have it now for trunks. Since we are usually carrying stuff when we want that trunk open this makes good sense. Smart keys enabled the technology, but the engineer who came up with this should get Nobel Prize for common sense.

4) 360 degree cameras. Back-up cameras are good, but they don’t really show you enough to allow you to back-up looking only at the camera. Since you have to look all around anyway, what is the point? I have this in 2 of my cars and I never look at it. BMW’s Top View shows the driver what is behind and also beside the car. This makes it possible to actually use the camera to full effect. Of course a drone has to constantly hover over the car for this to work, but hey that is the price of progress.

5) Active sound cancellation. Honda was always one of the best manufacturers when it came to getting rid of unwanted noise in cars. They got so good it was getting too costly to take the sound deadening any further. Then they came up with the idea of active noise cancellation. Basically the same technology as the Bose headphones people use on planes, this simply generated noise that cancels unwanted noise. It is not rocket science, not costly, and it works.

Look for these and more features to become standard on all cars to the betterment of all.

Nicolas Zart wrote on May 30, 2012 - 6:50pm Permalink
I met someone one day at a car show who said he remembered when Mobile 1 came out it said to change oil, every 75,000 miles. That was in the mid-70s. A few years later, it dropped to 50K, then 20, 10 and finally 2.5. It's funny to hear oil can now last that long. I met a few veterans who never changed their oils and only topped it off once in a while. Oh and yes, they did change the filters.