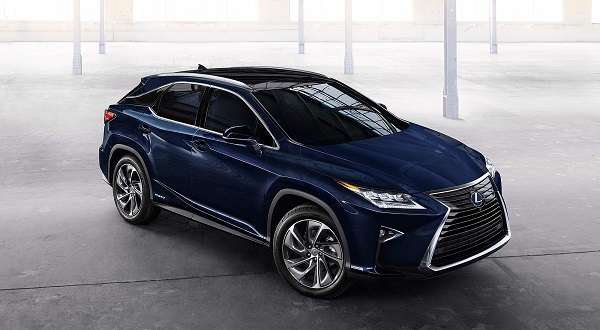 The big news when the new 2016 Lexus RX 350 and RX 450h were revealed is that, for now at least, the RX is sticking with just two rows. Lexus hinted that might change at some future point, but the vehicle is two-rows for now. Other than that, a lot changes and there are three things to know.

2016 Lexus RX 350 New Exterior
The new 2016 Lexus RX 350 is a real looker. The body still has a familiar look, but every body panel has been restyled to look more sporty and aggressive. Up front, the grill is even more pronounced. Lexus keeps pushing that sharp look further and further, and sales keep increasing so it appears that it is a big success. The fog lights are now vertical like on most Toyota Lexus models and the headlights sharper.

The rear quarter panel changes the most. The rear side window appears to now wrap around to the back of the vehicle. The wiper is still hidden up under the rear wing. That is a trademark RX feature that looks great and works great in real use. It is good to see it return.

2016 Lexus RX 350 Interior
Inside the RX is completely updated. The infotainment screen is now on top of the dash, a look that the pricey European manufacturers pioneered. Added to the center console is a rotary knob to select the drive mode. Eco, Normal and Sport/Sport+ are the settings. The moonroof now has two panels, so the second row gets more light.

2016 Lexus RX 350 Drivetrain
The outgoing RX 350 used a 3.5-liter V6 engine and the new RX will as well. However, it will be more like the engine used in the IS and GS models and have added direct fuel injection. Those models recommend premium fuel rather than the regular unleaded the outgoing RX 350 was able to use. We are awaiting a statement on this form Lexus and will update our story once we know if regular will still be suggested.

The 8-speed transmission that has migrated from the IS F to all Lexus models will be the only transmission going forward. The extra gears improve fuel economy and coupled with the new more powerful engine will make the RX 350 quicker. No changes to the RX 450h drivetrain have been announced. That vehicle uses a V6 engine, CVT transmission and hybrid drive.